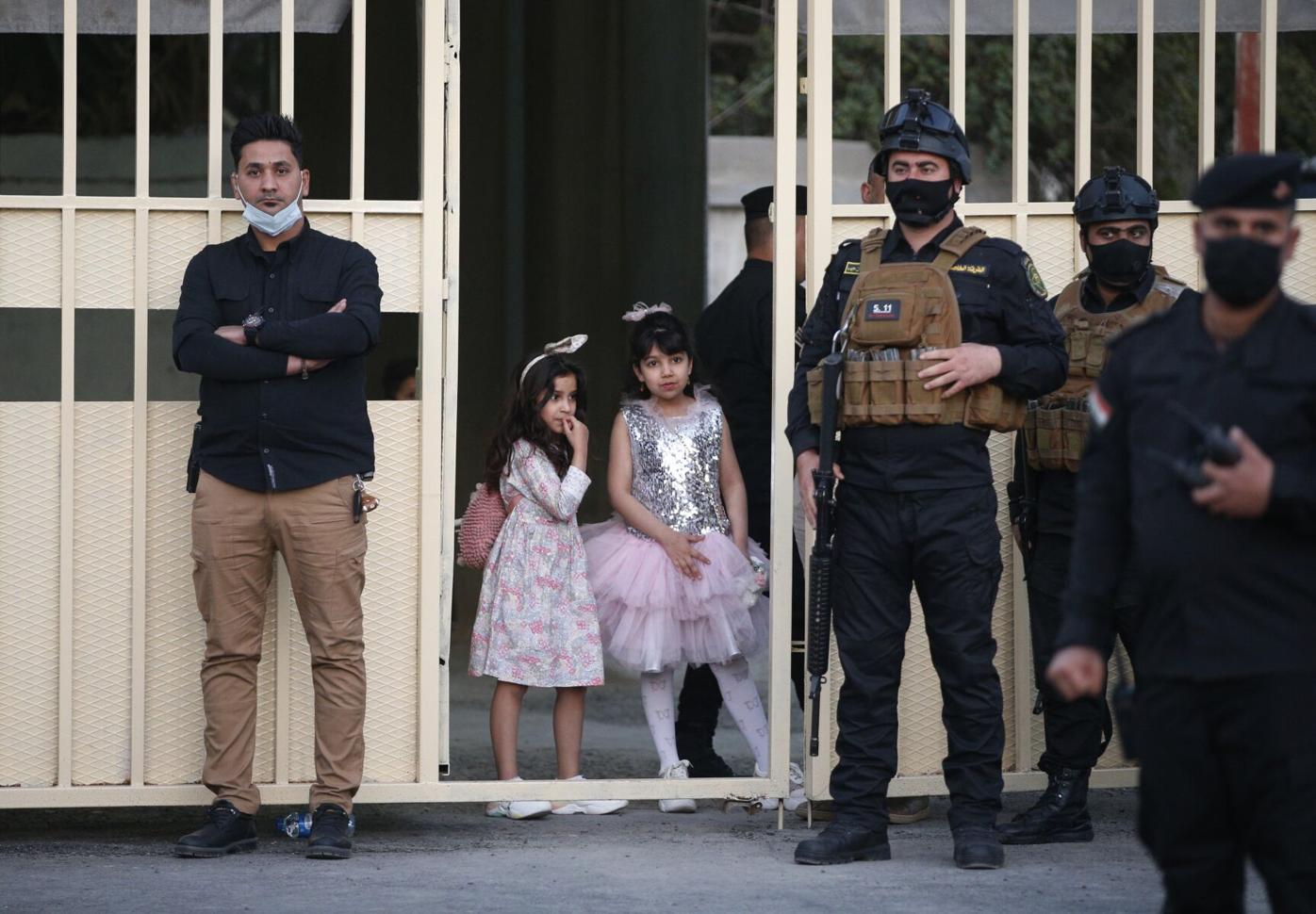 Young girls watch near security personnel after Pope Francis' meeting with bishops, priests, religious men and women, seminarians and catechists in the Syriac Catholic Cathedral of Our Lady of Deliverance in Baghdad March 5, 2021. 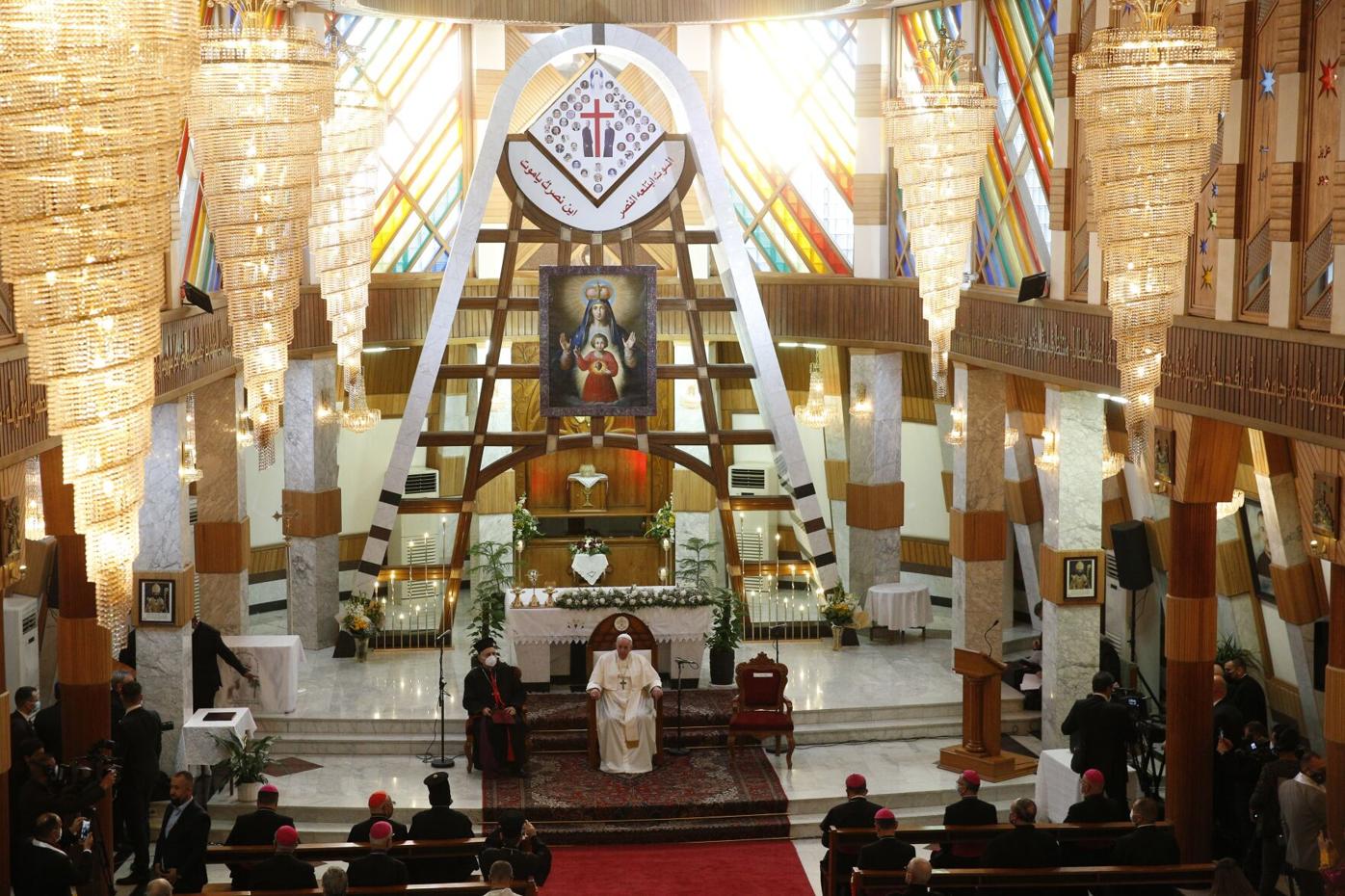 Pope Francis leads a meeting with bishops, priests, religious men and women, seminarians and catechists in the Syriac Catholic Cathedral of Our Lady of Deliverance in Baghdad March 5, 2021. 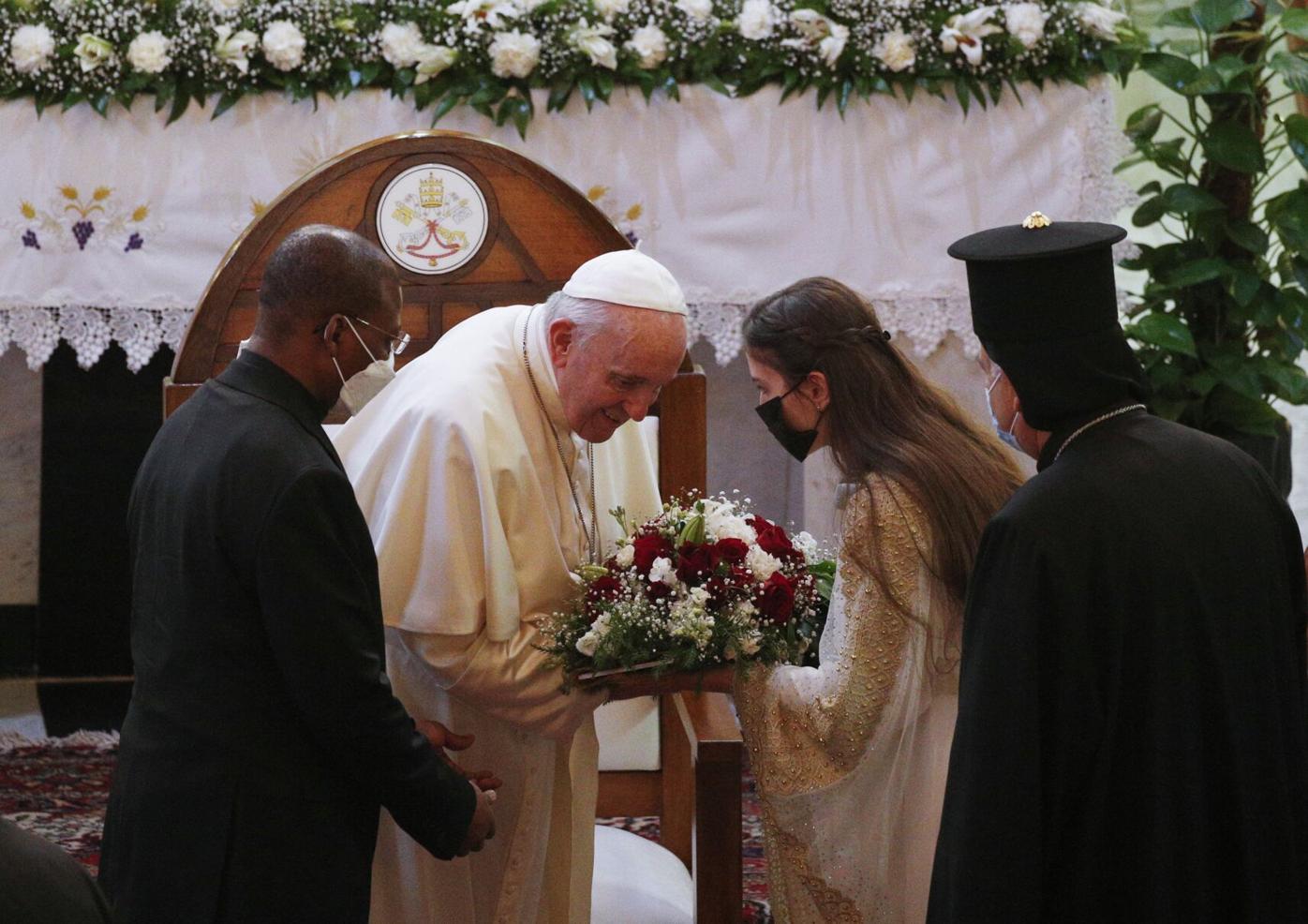 Pope Francis accepts flowers during a meeting with bishops, priests, religious men and women, seminarians and catechists in the Syriac Catholic Cathedral of Our Lady of Deliverance in Baghdad March 5, 2021.

BAGHDAD | Visiting a Baghdad cathedral "hallowed by the blood of our brothers and sisters" murdered in a terrorist attack that shook the world, Pope Francis said their sacrifice must motivate faith and a commitment to working for the common good.

The Syriac Catholic Cathedral of Our Lady of Deliverance, sometimes referred to as Our Lady of Salvation, is now a shrine to 48 Christian martyrs who died Oct. 31, 2010, when militants belonging to a group linked to al-Qaida laid siege to the church, detonating explosives and shooting people; 48 Catholics -- including two priests -- died inside and more than 100 people were wounded.

Photos of the dead, including a 3-year-old, hang over the altar.

According to the Vatican, before the terrorist attack and the 2014-2017 war against Islamic State militants, some 5,000 Syriac Catholic families frequented the cathedral; now, it said, no more than 1,000 families belong to all three Syriac Catholic parishes in the capital.

Pope Francis met in the church March 5 with the nation's bishops and a representative group of priests, religious, seminarians and catechists. They came from the Syriac Catholic community, but also Chaldean Catholic, Armenian Catholic and Latin-rite Catholic parishes.

The pope told them that the memory of the 48 -- whose sainthood cause is underway -- and of the countless other Christians killed in the decade since, should "inspire us to renew our own trust in the power of the cross and its saving message of forgiveness, reconciliation and rebirth."

"Christians are called to bear witness to the love of Christ in every time and place," he said. "This is the Gospel that must be proclaimed and embodied in this beloved country as well."

Syriac Patriarch Ignace Joseph III Younan welcomed Pope Francis to the cathedral, telling him the 48 "mixed their blood with that of the Lamb," and showed "their oppressed, killed or uprooted brothers and sisters in Iraq and the Middle East" that the risen Lord continues to walk with his people.

Cardinal Louis Sako of Baghdad, the Chaldean Catholic patriarch, told the pope that the Syriac Catholic cathedral and its martyrs are a poignant and powerful sign of what Christians throughout the country have endured and survived over the past decade.

While the number of Christians in the country has plummeted in the past 20 years, the cardinal said, many have remained and have "preserved the faith, our spiritual serenity and our fraternal solidarity."

"This paternal visit of yours," he told the pope, "gives us the strength to overcome adversity, reassures us that we have not been forgotten and generates in us the confidence and enthusiasm to continue our journey of faith and evangelical witness."

Pope Francis said he understood how the country's small Christian community, which has been present in the country since the first century, could lose its enthusiasm.

"We know how easy it is to be infected by the virus of discouragement that at times seems to spread all around us," the pope told them. "Yet the Lord has given us an effective vaccine against that nasty virus. It is the hope born of persevering prayer and daily fidelity to our apostolates."

"With this vaccine, we can go forth with renewed strength, to share the joy of the Gospel as missionary disciples and living signs of the presence of God's kingdom of holiness, justice and peace," Pope Francis said.

The women in the congregation responded several times to his speech with zagharit, an ululation of praise or honor.

With the representatives of the various Catholic communities wearing masks and socially distanced inside the church, the pope also encouraged them to reach out to one another and to other Christians.

Pope Francis said they should think of a prized carpet. "The different churches present in Iraq, each with its age-old historical, liturgical and spiritual patrimony, are like so many individually colored threads that, woven together, make up a single beautiful carpet, one that displays not only our fraternity but points also to its source."

"God himself is the artist who imagined this carpet, patiently wove it and carefully mends it, desiring us ever to remain closely knit as his sons and daughters," the pope said.

But, being human and prone to sin, individuals and groups can create knots that stop the process of weaving, he said. The knots "can be untied by grace, by a greater love; they can be loosened by the medicine of forgiveness and by fraternal dialogue, by patiently bearing one another's burdens and strengthening each other in moments of trial and difficulty.

The pope signed the church's book of honor, leaving a message for the Syriac Catholic congregants.

His visit to Iraq was being watched live on satellite TV by thousands in Iraq and throughout the Middle East.