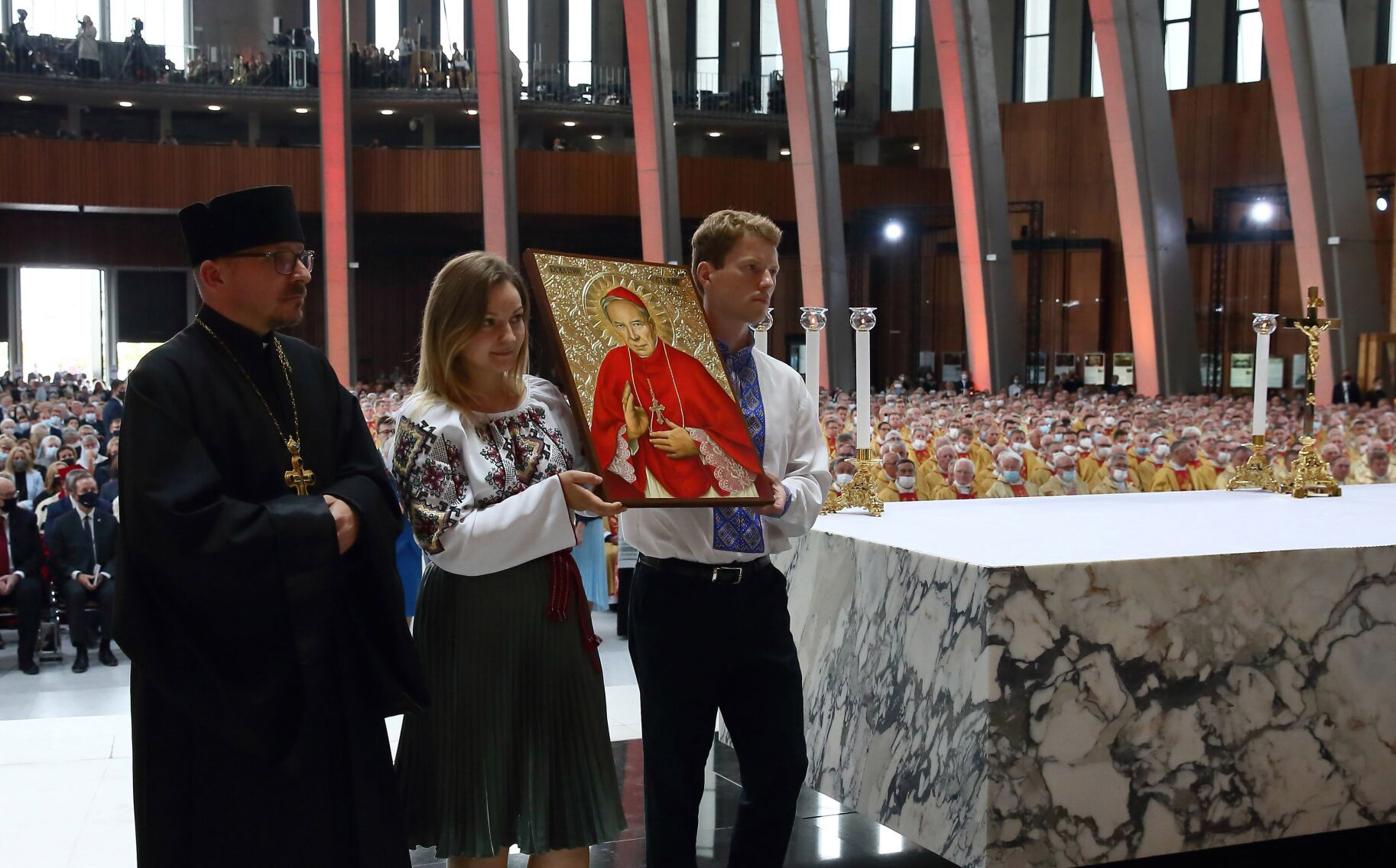 Members of the apostolic movement Family of Families, founded by Polish Cardinal Stefan Wyszynski in 1952, carry his portrait at the Church of Divine Providence in Warsaw Sept. 12, 2021, during his joint beatification with Mother Elisabeth Rosa Czacka. (CNS photo/Grzegorz Galazka) 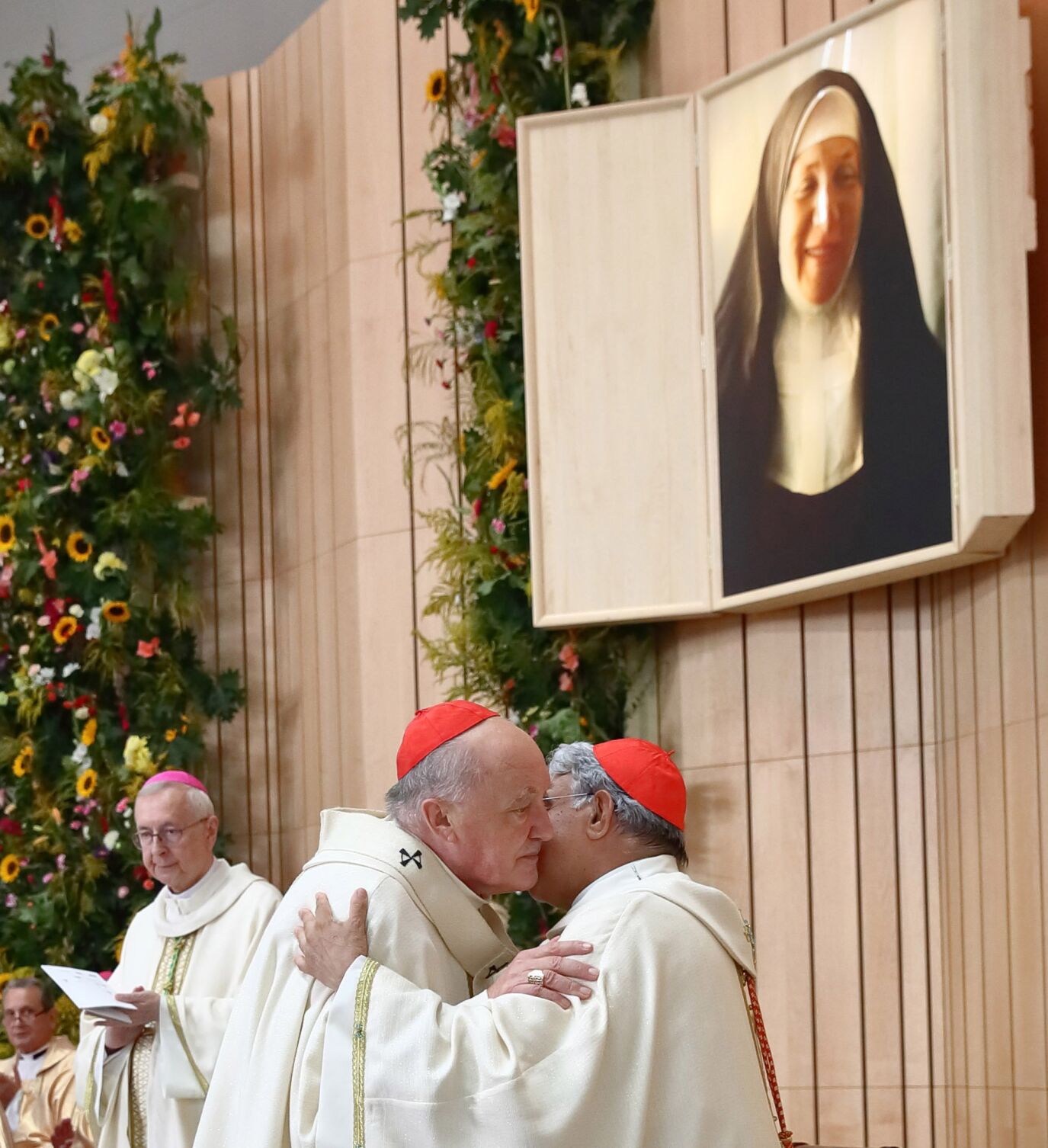 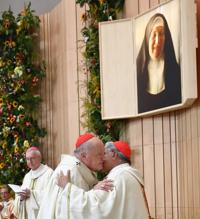 WARSAW, Poland | The archbishop who steered Poland’s Catholic Church through communist rule and a blind Franciscan nun who founded one of Europe’s foremost centers for the sight-impaired took a step closer to sainthood Sept. 12.

Cardinal Marcello Semeraro, prefect of the Vatican Congregation for Saints’ Causes, said both “gave testimony of a life faithful to the Gospel at all costs — a model of service to a specific person in need, even when no one cares and indifference seems to prevail.”

The Italian cardinal preached at the beatification Mass for Cardinal Stefan Wyszynski, who died in 1981, and Mother Elisabeth Rosa Czacka, who died in 1961, at Warsaw’s Church of Divine Providence. In attendance were 7,000 people — including government leaders, bishops from Poland and abroad, as well as two women whose cures were the miracles for the advancement of the sainthood causes.

Both of the newly beatified “knew how to fill each other with strength, endurance and courage,” said Cardinal Semeraro. “He was personally involved in helping all those who experienced abuse and limitations in practicing freedom and professing their faith; she, blind among the physically and spiritually blind, helped all those abandoned and left at the margins.”

Cardinal Semeraro said Cardinal Wyszynski had defended freedom and defied an ideology which “dehumanized and led people away from the fullness of faith,” but had also been “edified by the faith and perseverance” of Mother Czacka, who had “recognized the signs of God’s calling” from youth, despite her own blindness.

“This led to precious cooperation, the frank sharing of intentions and plans — yet it gave birth, above all, to a communion of faith, love for God and for the needy and defenseless human being,” Cardinal Semeraro said.

“Today’s new ‘Blesseds’ received from this nation the inestimable good of faith and the vitality of a centuries-old tradition of love for God, offering their people in return a lifelong conviction of God’s primacy.”

The Mass, broadcast live by Polish state TV and relayed to parishes across the country, was concelebrated by more than 600 priests, many personally ordained by Cardinal Wyszynski. Nuns and teachers from Mother Czacka’s center at nearby Laski also attended.

Relics of the two were presented by Sister Nulla Lucyna Garlinska, from Poland’s Community of the Disciples of the Cross, whose 1989 cure from thyroid cancer was confirmed in 2019 as a miraculous intervention by Blessed Wyszynski, and 19-year-old student Karolina Gawrych, whose cure from irreparable brain damage after a 2010 playground accident was officially attributed to Blessed Czacka’s intercession in October 2020.

In an Angelus message during his Sept. 12 Mass in Budapest, Hungary, Pope Francis said the example of the Poles should encourage Catholics “to transform darkness into light with the power of love.”

In Warsaw, Cardinal Kazimierz Nycz told the Mass he hoped the two would “intercede with God for us and for entire homeland.”

Born in Zuzela, Poland, Aug. 3, 1901, Stefan Wyszynski was ordained in 1924 and named bishop of Lublin in 1946. He was appointed archbishop of Gniezno-Warsaw two years later.

In 1950, he signed a controversial memo of understanding with the communist regime; the memo promised the church institutional protection for recognizing the regime’s authority, but was swiftly violated by the communist side.

In September 1953, nine months after being named a cardinal, Blessed Wyszynski was arrested with other priests. He was held until October 1956, when a new communist leader, Wladyslaw Gomulka, sought his help calming public unrest.

Having reached a new deal with Gomulka allowing freer church appointments and some religious teaching, Blessed Wyszynski headed the church through Poland’s Christian millennium in 1966 and died May 28, 1981, during strikes by the Solidarity movement.

Rosa Czacka, born Oct. 22, 1876, into a noble family in Ukraine, lost her sight at age 22 after a riding accident and taught herself Braille. She opened Poland’s first center for the blind in 1908 after visiting existing centers in Austria, France, Germany and Switzerland.

At the end of World War I, she founded the Franciscan Sisters Servants of the Cross and the order’s Laski home for the blind, a site that also became a discussion center for Polish students and intellectuals.

After a stroke in 1948, she withdrew from her role as mother superior and lived quietly till her death May 15, 1961.

The nun first met then-Father Wyszynski in 1926 at Laski, where he later served as a chaplain during World War II while hiding from the Gestapo. He celebrated Blessed Czacka’s funeral in 1961.

In his homily, Cardinal Semeraro said Blessed Wyszynski had found inspiration from a fragment of charred paper blown to Laski during the 1944 Warsaw Uprising against Nazi occupation, with only three legible words, “You will love.”

He added that St. John Paul II had later attributed his 1978 election to Blessed Wyszynski’s unbroken faith, “which did not retreat before prison and suffering.”

The twin beatifications, postponed from 2020 because of COVID-19, were marked by new postage stamps in Poland, as well as a Sept. 10 Senate resolution praising Blessed Wyszynski as a “great statesman,” who steered the church through “persecution, violence, rapine and injustice.”

President Andrzej Duda, who placed a wreath at the cardinal’s Warsaw cathedral tomb before the Mass, also praised his “great services” to the Polish nation’s survival.

Cardinal Semeraro said the feast days of Blesseds Wyszynski and Czacka would be marked respectively May 28 and May 19.

Start your day with us — receive the Daily Headlines email covering the top stories from a Catholic perspective.