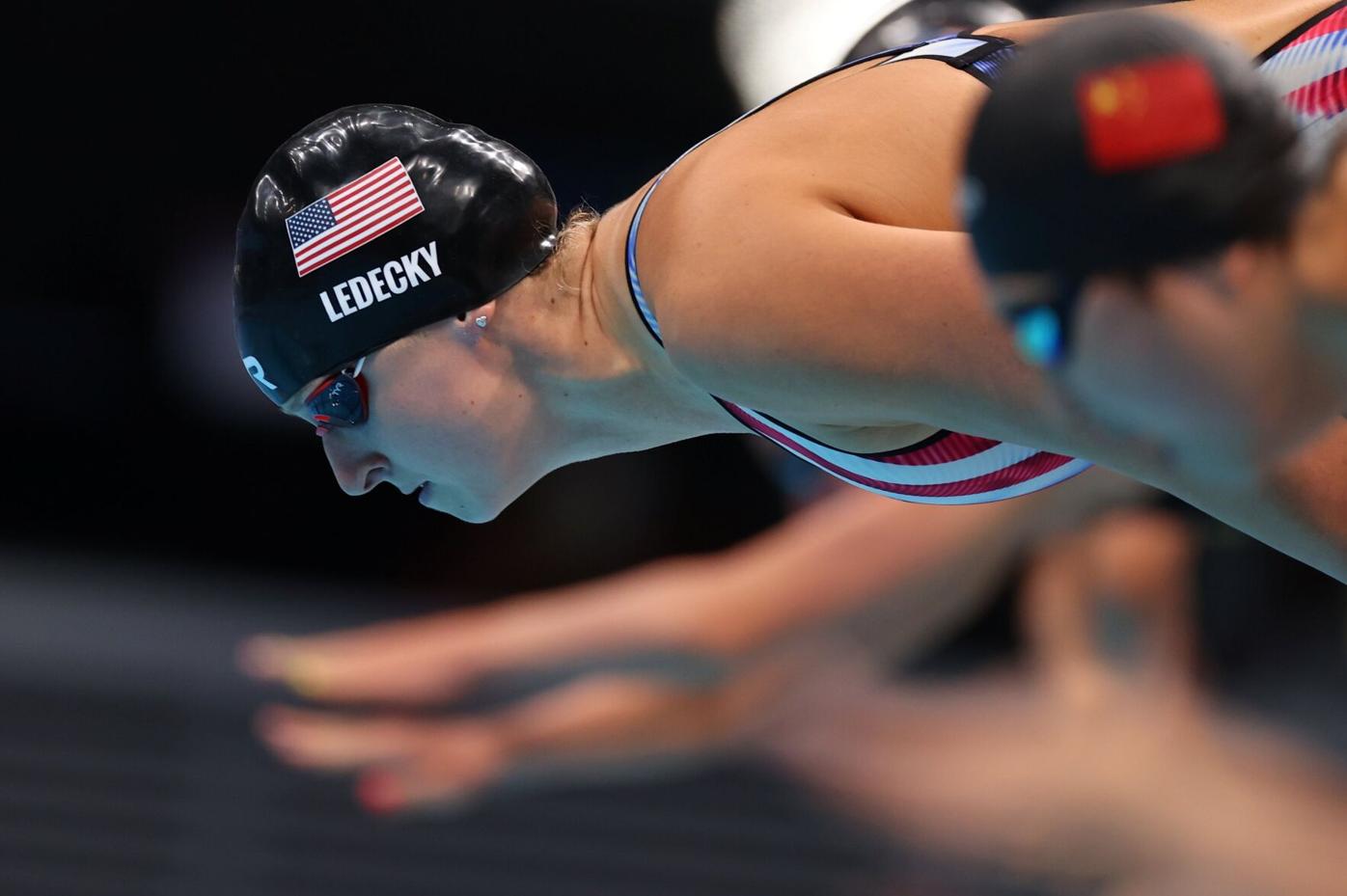 Katie Ledecky of the United States gets ready enter the pool for the women's 1500m freestyle final during the 2020 Tokyo Olympics July 28, 2021. The 2015 graduate of the Stone Ridge School of the Sacred Heart in Bethesda, Md., won the gold medal in the Olympic debut of the event. (CNS photo/Marko Djurica, Reuters) 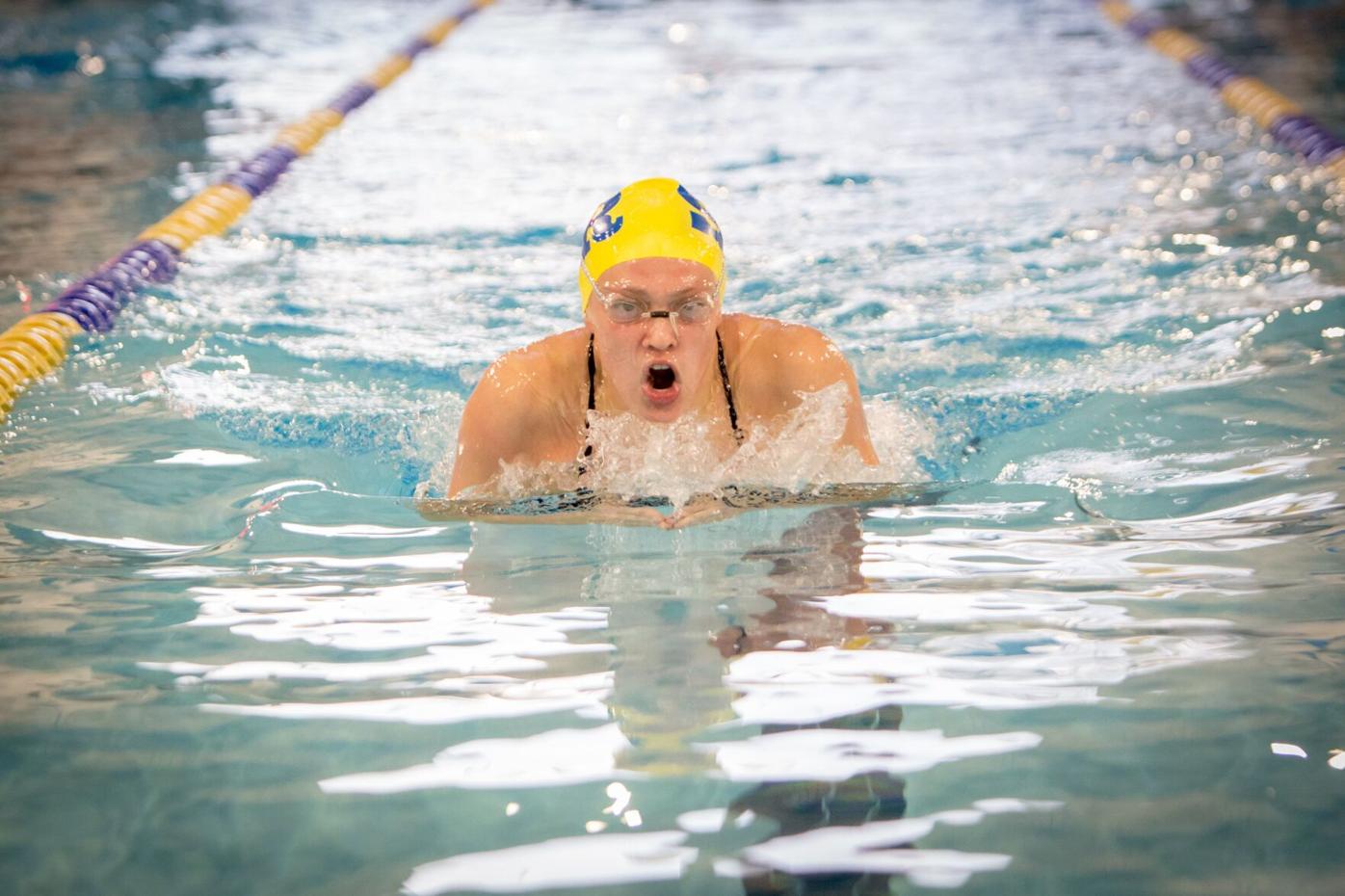 Phoebe Bacon is shown in this undated photo competing in a swimming race while she was a student at Stone Ridge School of the Sacred Heart in Bethesda, Md. She graduated from the high school in 2020 and will compete in swimming for the United States at the Tokyo Olympics July 23-Aug. 8, 2021. this summer. (CNS photo/Stone Ridge School of the Sacred Heart, courtesy Catholic Standard)

BETHESDA, Md. | After a week of historic and electrifying swimming events at the Summer Olympics in Tokyo, two Catholic Olympians will return to their hometown of Bethesda having proudly represented their parish community, their schools and the USA.

Both Olympic athletes attended Little Flower School in Bethesda, in the Washington Archdiocese, and are alumnae of Stone Ridge School of the Sacred Heart, also in Bethesda. Stone Ridge hosted a July 19 pep rally for Ledecky, class of 2015, and Bacon, class of 2020, that drew hundreds of enthusiastic supporters.

In the women's 1,500-meter freestyle swim July 28, a first-time Olympic event, Ledecky swam into the history books as the race's inaugural gold medal winner. For her final swim event July 31, Ledecky continued her undefeated streak in the 800-meter freestyle race over the past 11 years, touching the wall at 8:12.57 and winning her seventh gold medal.

Bacon, 18, a rising sophomore at the University of Wisconsin, was only .23 seconds from reaching the medal podium in her event, following a second-place finish the day before in her semifinal heat. She holds the 2020 NCAA title in the 200-meter backstroke and is expected to continue training for future national and international competitions.

"What a thrill it has been to watch Katie and Phoebe compete this week. Stone Ridge is incredibly proud of these alumnae athletes, not only for what they accomplish in the sport of swimming, but for the values and character they represent," said Catherine Ronan Karrels, head of Stone Ridge School.

"I am so proud of how they both swam in these Olympic games and how they represented the USA," she said.

Sister Rosemaron Rynn, of the Congregation of the Sisters, Servants of the Immaculate Heart of Mary and the former principal of Little Flower School, said the parish and school communities are delighted with Ledecky's and Bacon's Olympic journeys and their overall fantastic achievements in their sport.

"They got a lot of prayers. ... We are very proud of them. They are a credit to their families and a credit to Little Flower," she told the Catholic Standard, Washington's archdiocesan newspaper. "They are great role models and showed such good sportsmanship.. ... They are really good people."

Sister Rosemaron said she and the five other Immaculate Heart of Mary sisters who live in the Little Flower School convent were excited to tune in live to watch each swimming event and cheer for their former students, who years ago were "school buddies" at Little Flower and are now U.S. Olympic teammates.

Prior to the Olympics, Sister Rosemaron said she and the sisters had fun sorting through old photographs of the Olympians as elementary school kids to share with NBC for their Olympic television coverage of the athletes.

"It was a real family affair," said Sister Rosemaron, adding that she stayed in close touch with both families during their Olympics run.

Katie Ledecky reached out to her former principal via e-mail on Aug. 2 after the swimming events in Tokyo had concluded. Ledecky wrote to Sister Rosemaron that she hopes to visit the sisters as soon as she returns to Bethesda in the coming weeks. In previous Catholic Standard interviews, Ledecky spoke of her deep Catholic faith and how the Immaculate Heart of Mary sisters who taught her at Little Flower School are her role models in the faith.

"We are thrilled and pleased for both our daughters of the parish," said Msgr. Peter Vaghi, pastor of Little Flower Parish, where the Bacon and Ledecky families are parishioners. He said the young athletes' skill and dedication to their sport shone throughout the Olympic swimming events, but also in how they graciously and gracefully handled the media spotlight during world's largest sporting event.

Following her 800-meter gold-medal winning race, Ledecky told NBC she planned to compete in the Paris Olympics in 2024 and possibly four years later at the Los Angeles games in 2028. "That was not my last swim. I'm at least going to '24," she said.

The next day on Twitter, Ledecky said, "Thank you Tokyo, and thank you all for the tremendous support this week and over the years! I could hear you all! Bringing 2 Golds, 2 Silvers, and countless memories back to the USA."

In an Aug. 1 Instagram post, Bacon was thankful she was be able to compete in the Tokyo Olympics, and hinted too at what's in store for her in the future. "That's all folks! I am so grateful to have had the honor of representing my country in the Olympics! Onto the next! #teamUSA," she wrote.

"Katie and Phoebe are both true ambassadors of what it means to be a Stone Ridge student-athlete, and even more importantly a U.S. Olympic athlete," said Stone Ridge athletic director Andrew Maguire, describing the young ladies as role models for future U.S. swimmers.

"Katie and Phoebe have taken their humble and faith-based roots with them to this Olympic stage, and it has proven to serve them well," he said. "I could not be more proud of them, and we cannot wait to welcome them back to campus in the future to share stories of their Olympic experience with our current students... Both will always be Stone Ridge Gators!"

Start your day with us — receive the Daily Headlines email covering the top stories from a Catholic perspective.