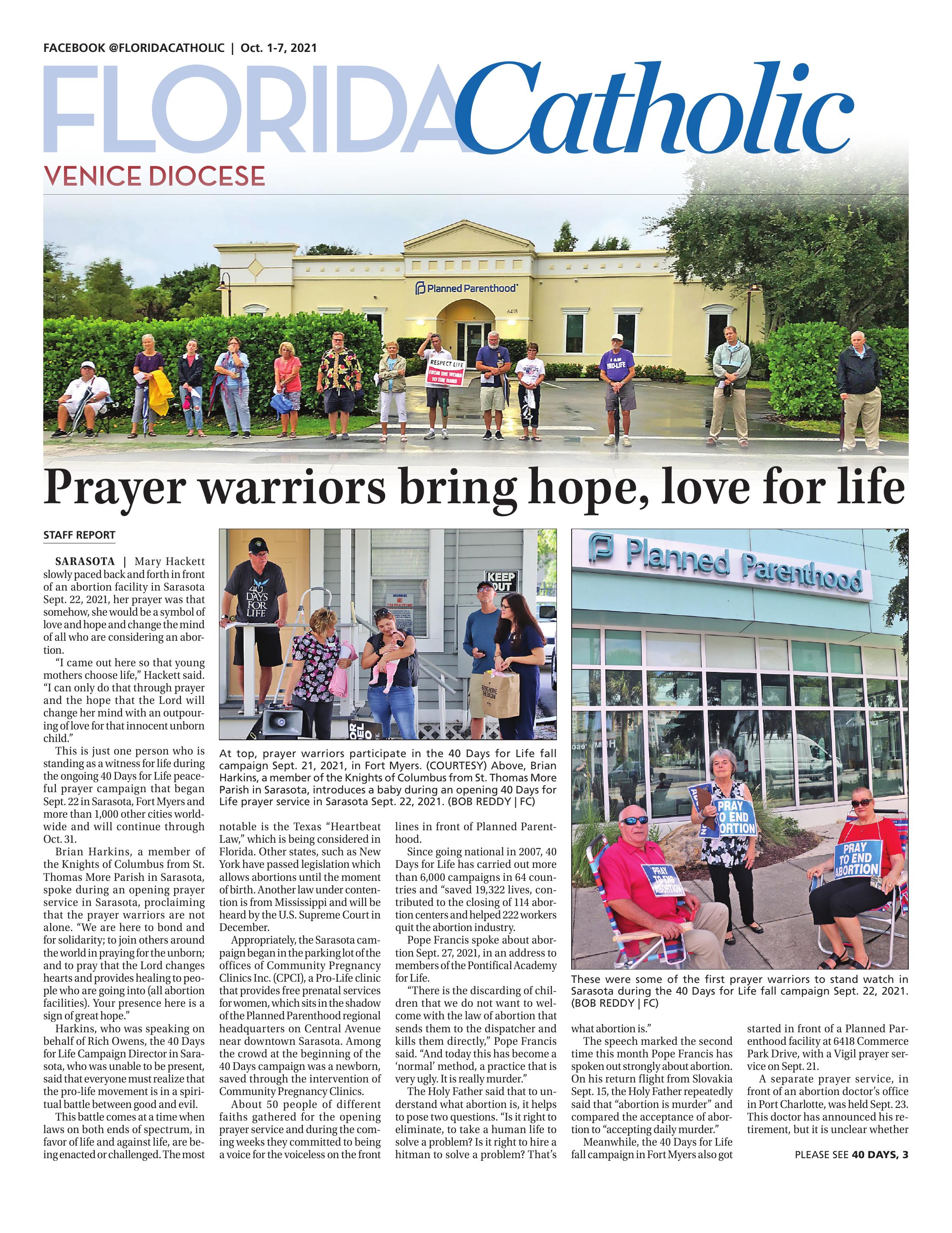 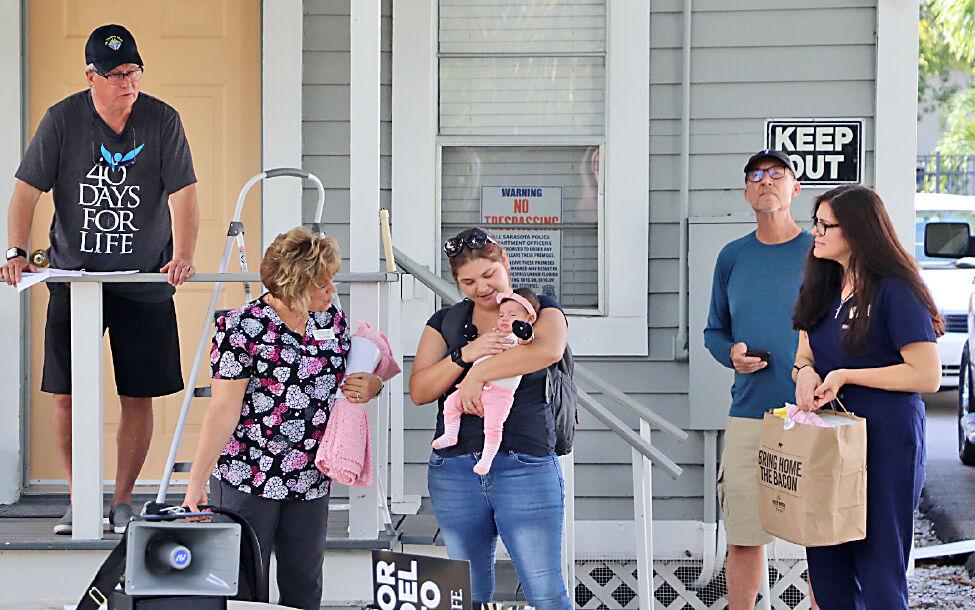 Brian Harkins, a member of the Knights of Columbus from St. Thomas More Parish in Sarasota, introduces a baby during an opening 40 Days for Life prayer service in Sarasota on Sept. 22, 2021.

Sarasota  |  Mary Hackett slowly paced back and forth in front of an abortion facility in Sarasota Sept. 22, 2021, her prayer was that somehow, she would be a symbol of love and hope and change the mind of all who are considering an abortion.

“I came out here so that young mothers choose life,” Hackett said. “I can only do that through prayer and the hope that the Lord will change her mind with an outpouring of love for that innocent unborn child.”

This is just one person who is standing as a witness for life during the ongoing 40 Days for Life peaceful prayer campaign that began Sept. 22 in Sarasota, Fort Myers and more than 1,000 other cities worldwide and will continue through Oct. 31.

Brian Harkins, a member of the Knights of Columbus from St. Thomas More Parish in Sarasota, spoke during an opening prayer service in Sarasota, proclaiming that the prayer warriors are not alone. “We are here to bond and for solidarity; to join others around the world in praying for the unborn; and to pray that the Lord changes hearts and provides healing to people who are going into (all abortion facilities). Your presence here is a sign of great hope.”

Harkins, who was speaking on behalf of Rich Owens, the 40 Days for Life Campaign Director in Sarasota, who was unable to be present, said that everyone must realize that the pro-life movement is in a spiritual battle between good and evil. 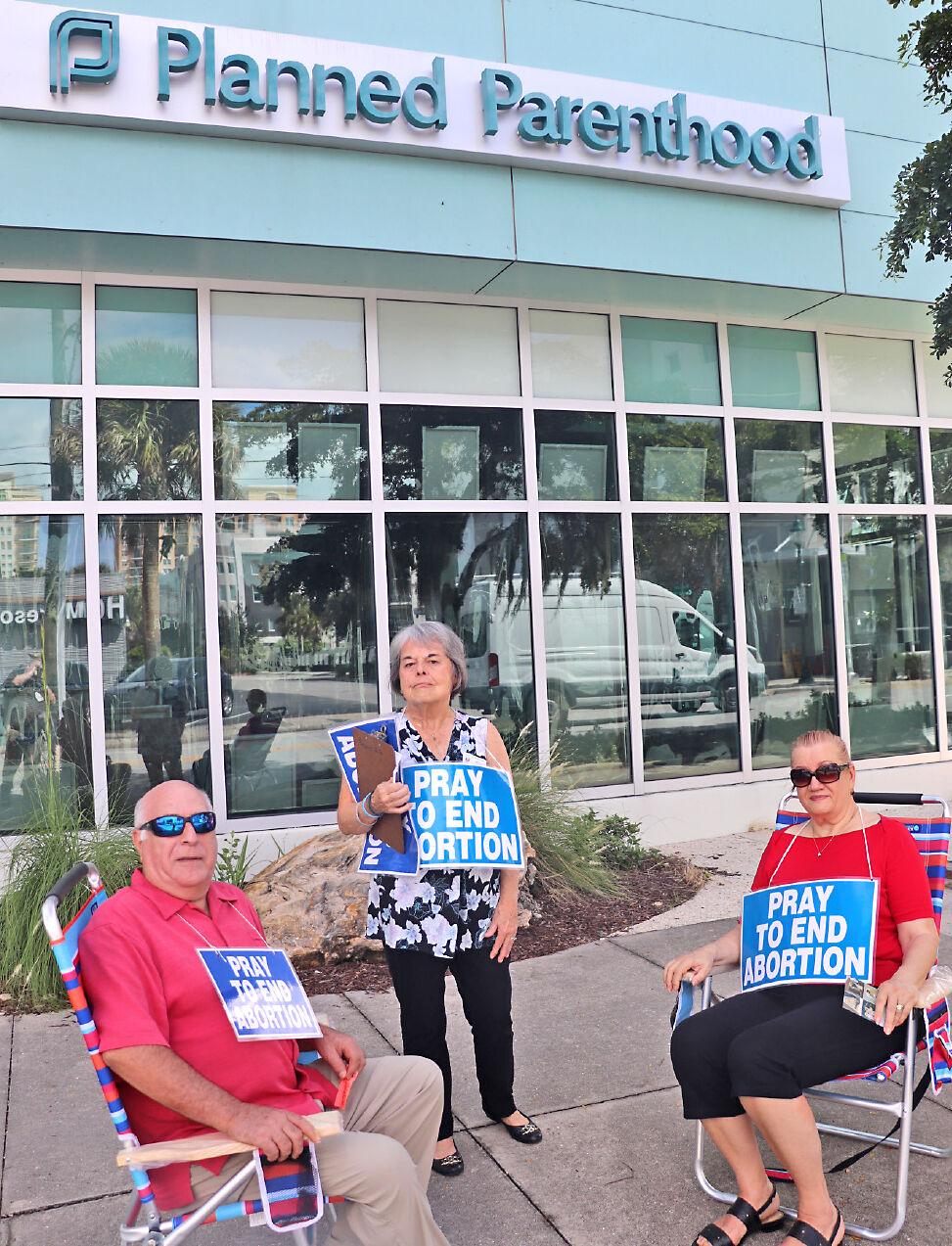 These were some of the first prayer warriors to stand watch in Sarasota during the 40 Days for Life fall campaign on Sept. 22, 2021.

This battle comes at a time when laws on both ends of spectrum, in favor of life and against life, are being enacted or challenged. The most notable is the Texas “Heartbeat Law,” which is being considered in Florida. Other states, such as New York have passed legislation which allows abortions until the moment of birth. Another law under contention is from Mississippi and will be heard by the U.S. Supreme Court in December.

Appropriately, the Sarasota campaign began in the parking lot of the offices of Community Pregnancy Clinics Inc. (CPCI), a Pro-Life clinic that provides free prenatal services for women, which sits in the shadow of the Planned Parenthood regional headquarters on Central Avenue near downtown Sarasota. Among the crowd at the beginning of the 40 Days campaign was a newborn, saved through the intervention of Community Pregnancy Clinics.

About 50 people of different faiths gathered for the opening prayer service and during the coming weeks they committed to being a voice for the voiceless on the front lines in front of Planned Parenthood.

Since going national in 2007, 40 Days for Life has carried out more than 6,000 campaigns in 64 countries and “saved 19,322 lives, contributed to the closing of 114 abortion centers and helped 222 workers quit the abortion industry.

Pope Francis spoke about abortion Sept. 27, 2021, in an address to members of the Pontifical Academy for Life.

“There is the discarding of children that we do not want to welcome with the law of abortion that sends them to the dispatcher and kills them directly,” Pope Francis said. “And today this has become a ‘normal’ method, a practice that is very ugly. It is really murder.”

The speech marked the second time this month Pope Francis has spoken out strongly about abortion. On his return flight from Slovakia Sept. 15, the Holy Father repeatedly said that “abortion is murder” and compared the acceptance of abortion to “accepting daily murder.”

Meanwhile, the 40 Days for Life fall campaign in Fort Myers also got started in front of a Planned Parenthood facility at 6418 Commerce Park Drive, with a Vigil prayer service on Sept. 21.

A separate prayer service, in front of an abortion doctor’s office in Port Charlotte, was held Sept. 23. This doctor has announced his retirement, but it is unclear whether abortions will continue to take place in Port Charlotte, so a few dozen prayer warriors held a peaceful prayer vigil.

Participants in the 40 Days for Life campaign will be joining other like-minded individuals. Some commit to taking part for a few minutes, an hour, or all day as they stand in the public right-of-way. Appropriate signs will be provided at both sites but are not needed to stand and pray. Check with your Parish to learn what hours they have committed to 40 Days for Life, as many often commit to several days of prayer on the front lines.

Those interested in taking part in a local prayer vigil are encouraged to sign up in advance at www.40daysforlife.com (search for Fort Myers or Sarasota). While registration is encouraged, all are welcome to come for any amount of time they can to help save a life.