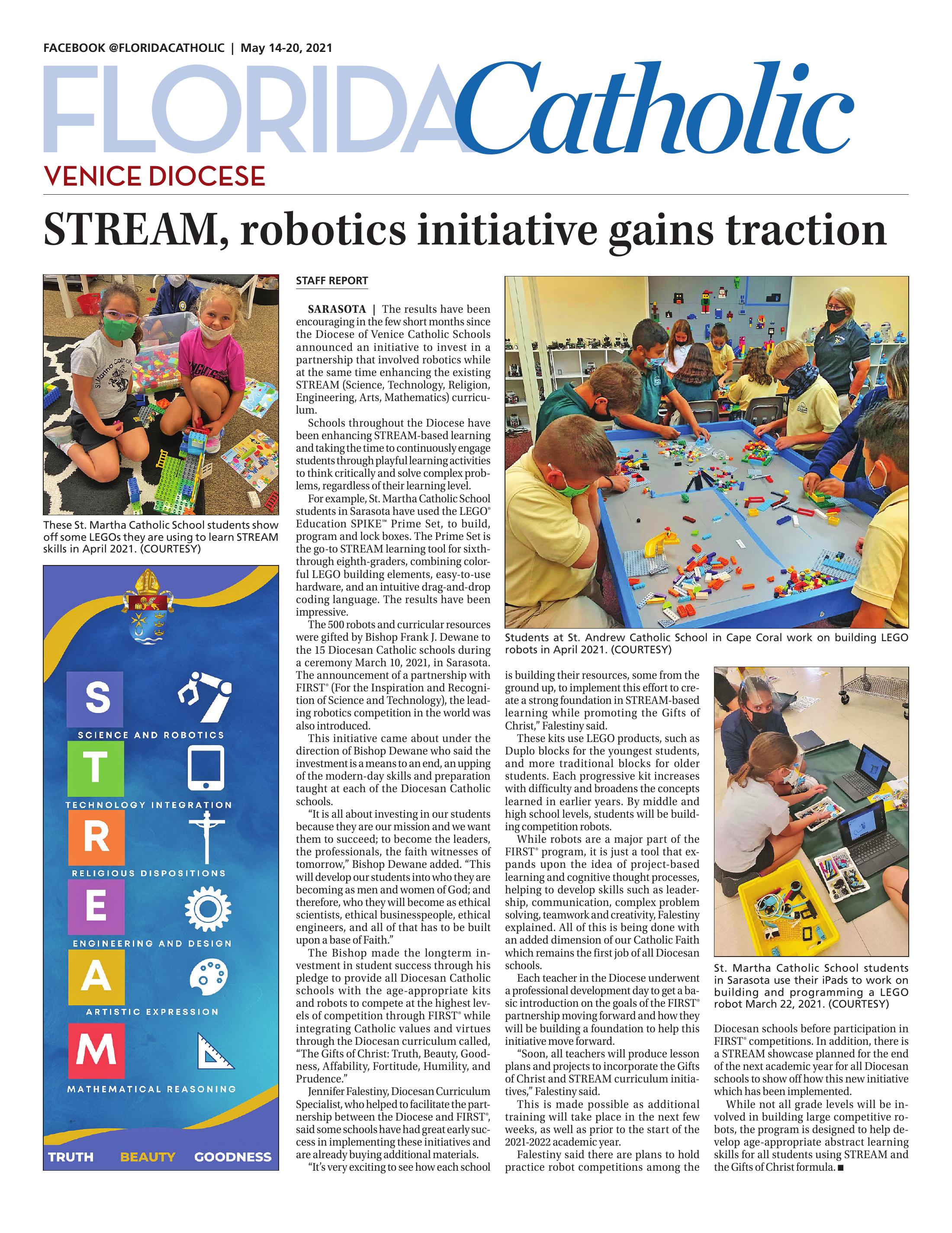 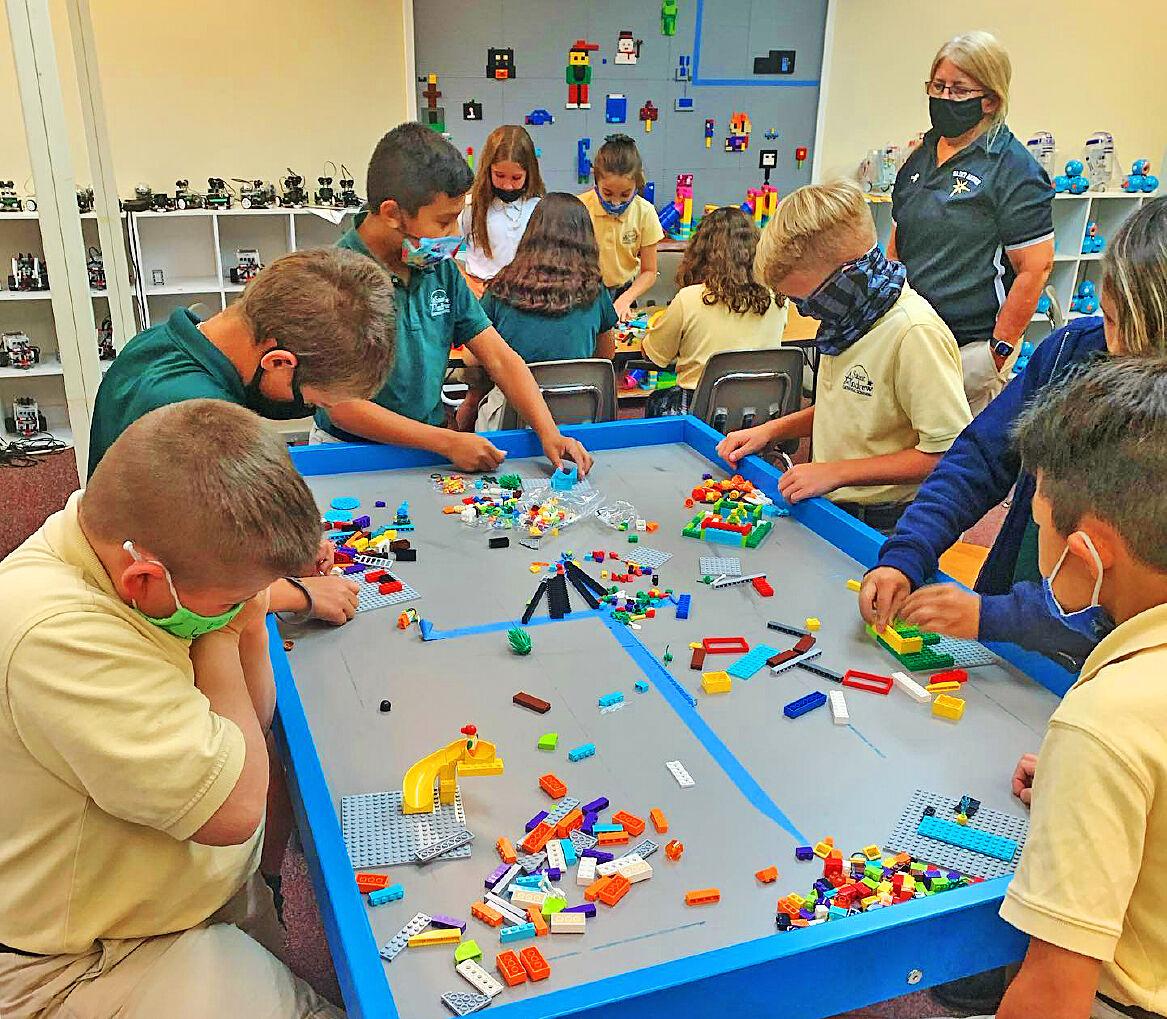 SARASOTA  |  The results have been encouraging in the few short months since the Diocese of Venice Catholic Schools announced an initiative to invest in a partnership that involved robotics while at the same time enhancing the existing STREAM (Science, Technology, Religion, Engineering, Arts, Mathematics) curriculum.

Schools throughout the Diocese have been enhancing STREAM-based learning and taking the time to continuously engage students through playful learning activities to think critically and solve complex problems, regardless of their learning level.

The 500 robots and curricular resources were gifted by Bishop Frank J. Dewane to the 15 Diocesan Catholic schools during a ceremony March 10, 2021, in Sarasota. The announcement of a partnership with FIRST® (For the Inspiration and Recognition of Science and Technology), the leading robotics competition in the world was also introduced.

This initiative came about under the direction of Bishop Dewane who said the investment is a means to an end, an upping of the modern-day skills and preparation taught at each of the Diocesan Catholic schools.

“It is all about investing in our students because they are our mission and we want them to succeed; to become the leaders, the professionals, the faith witnesses of tomorrow,” Bishop Dewane added. “This will develop our students into who they are becoming as men and women of God; and therefore, who they will become as ethical scientists, ethical businesspeople, ethical engineers, and all of that has to be built upon a base of Faith.”

The Bishop made the longterm investment in student success through his pledge to provide all Diocesan Catholic schools with the age-appropriate kits and robots to compete at the highest levels of competition through FIRST® while integrating Catholic values and virtues through the Diocesan curriculum called, “The Gifts of Christ: Truth, Beauty, Goodness, Affability, Fortitude, Humility, and Prudence.”

Jennifer Falestiny, Diocesan Curriculum Specialist, who helped to facilitate the partnership between the Diocese and FIRST®, said some schools have had great early success in implementing these initiatives and are already buying additional materials.

“It’s very exciting to see how each school is building their resources, some from the ground up, to implement this effort to create a strong foundation in STREAM-based learning while promoting the Gifts of Christ,” Falestiny said.

These kits use LEGO products, such as Duplo blocks for the youngest students, and more traditional blocks for older students. Each progressive kit increases with difficulty and broadens the concepts learned in earlier years. By middle and high school levels, students will be building competition robots.

While robots are a major part of the FIRST® program, it is just a tool that expands upon the idea of project-based learning and cognitive thought processes, helping to develop skills such as leadership, communication, complex problem solving, teamwork and creativity, Falestiny explained. All of this is being done with an added dimension of our Catholic Faith which remains the first job of all Diocesan schools.

Each teacher in the Diocese underwent a professional development day to get a basic introduction on the goals of the FIRST® partnership moving forward and how they will be building a foundation to help this initiative move forward.

“Soon, all teachers will produce lesson plans and projects to incorporate the Gifts of Christ and STREAM curriculum initiatives,” Falestiny said.

This is made possible as additional training will take place in the next few weeks, as well as prior to the start of the 2021-2022 academic year.

Falestiny said there are plans to hold practice robot competitions among the Diocesan schools before participation in FIRST® competitions. In addition, there is a STREAM showcase planned for the end of the next academic year for all Diocesan schools to show off how this new initiative which has been implemented.

While not all grade levels will be involved in building large competitive robots, the program is designed to help develop age-appropriate abstract learning skills for all students using STREAM and the Gifts of Christ formula.