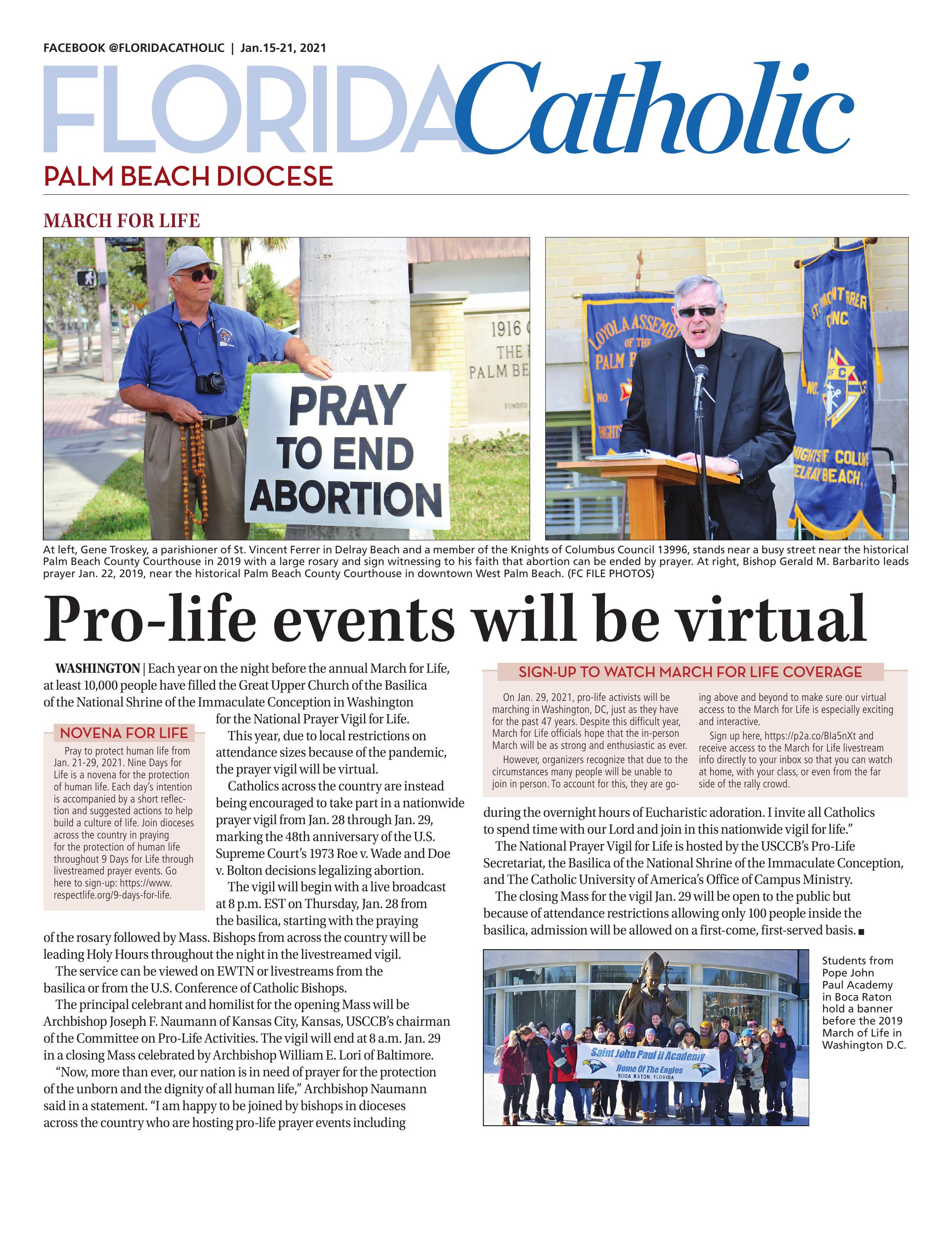 Palm-beach
Pro-life events will be virtual 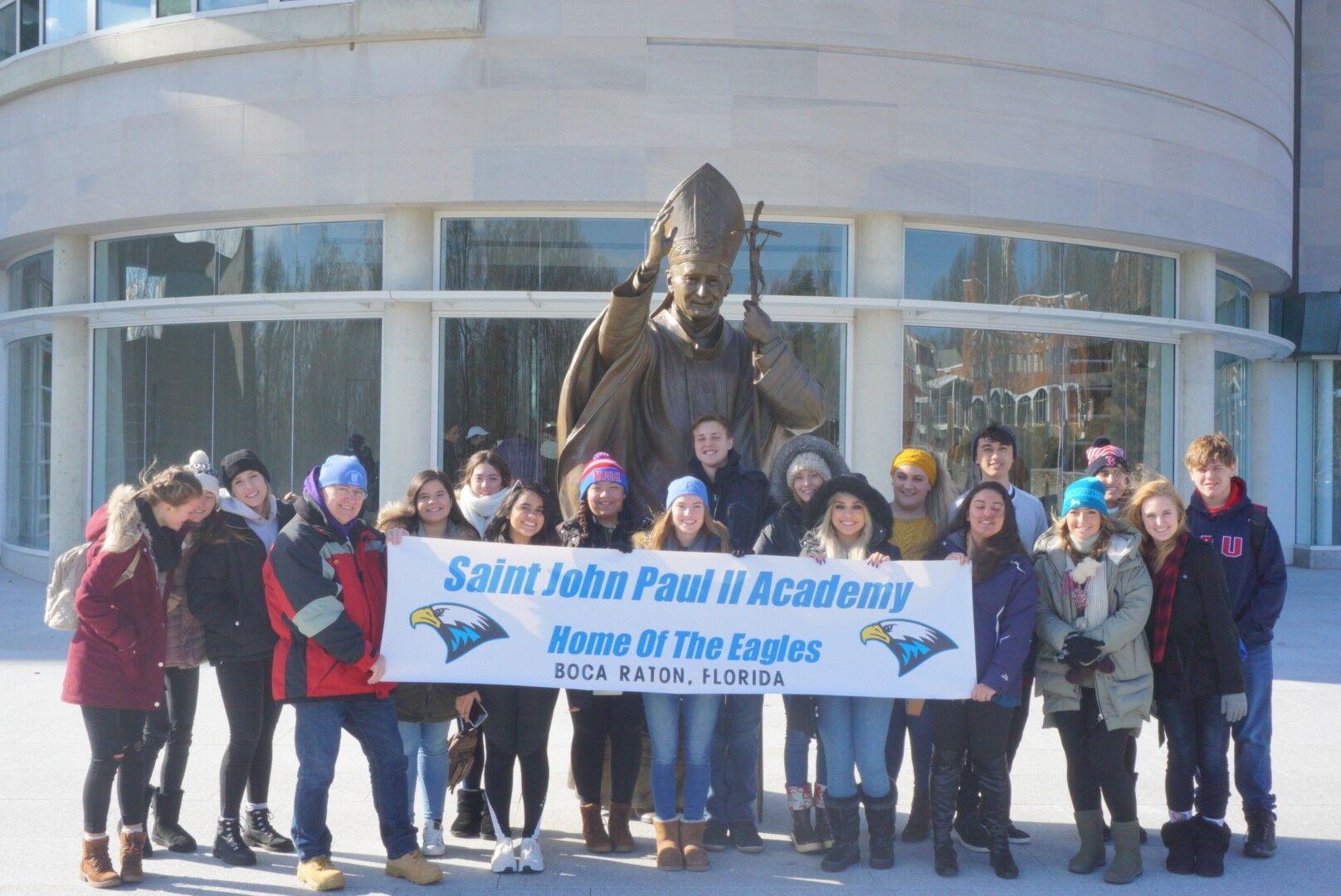 Pray to protect human life from Jan. 21-29, 2021. Nine Days for Life is a novena for the protection of human life. Each day’s intention is accompanied by a short reflection and suggested actions to help build a culture of life. Join dioceses across the country in praying for the protection of human life throughout 9 Days for Life through livestreamed prayer events. Go here to sign-up: https://www.respectlife.org/9-days-for-life.

WASHINGTON | On Jan. 29, 2021, pro-life activists will be marching in Washington, DC, just as they have for the past 47 years. Despite this difficult year, March for Life officials hope that the in-person March will be as strong and enthusiastic as ever.

Each year on the night before the annual March for Life, at least 10,000 people have filled the Great Upper Church of the Basilica of the National Shrine of the Immaculate Conception in Washington for the National Prayer Vigil for Life.

This year, due to local restrictions on attendance sizes because of the pandemic, the prayer vigil will be virtual.

Catholics across the country are instead being encouraged to take part in a nationwide prayer vigil from Jan. 28 through Jan. 29, marking the 48th anniversary of the U.S. Supreme Court’s 1973 Roe v. Wade and Doe v. Bolton decisions legalizing abortion.

The vigil will begin with a live broadcast at 8 p.m. EST on Thursday, Jan. 28 from the basilica, starting with the praying of the rosary followed by Mass. Bishops from across the country will be leading Holy Hours throughout the night in the livestreamed vigil.

The service can be viewed on EWTN or livestreams from the basilica or from the U.S. Conference of Catholic Bishops.

The principal celebrant and homilist for the opening Mass will be Archbishop Joseph F. Naumann of Kansas City, Kansas, USCCB’s chairman of the Committee on Pro-Life Activities. The vigil will end at 8 a.m. Jan. 29 in a closing Mass celebrated by Archbishop William E. Lori of Baltimore.

“Now, more than ever, our nation is in need of prayer for the protection of the unborn and the dignity of all human life,” Archbishop Naumann said in a statement. “I am happy to be joined by bishops in dioceses across the country who are hosting pro-life prayer events including during the overnight hours of Eucharistic adoration. I invite all Catholics to spend time with our Lord and join in this nationwide vigil for life.”

The National Prayer Vigil for Life is hosted by the USCCB’s Pro-Life Secretariat, the Basilica of the National Shrine of the Immaculate Conception, and The Catholic University of America’s Office of Campus Ministry.

The closing Mass for the vigil Jan. 29 will be open to the public but because of attendance restrictions allowing only 100 people inside the basilica, admission will be allowed on a first-come, first-served basis.