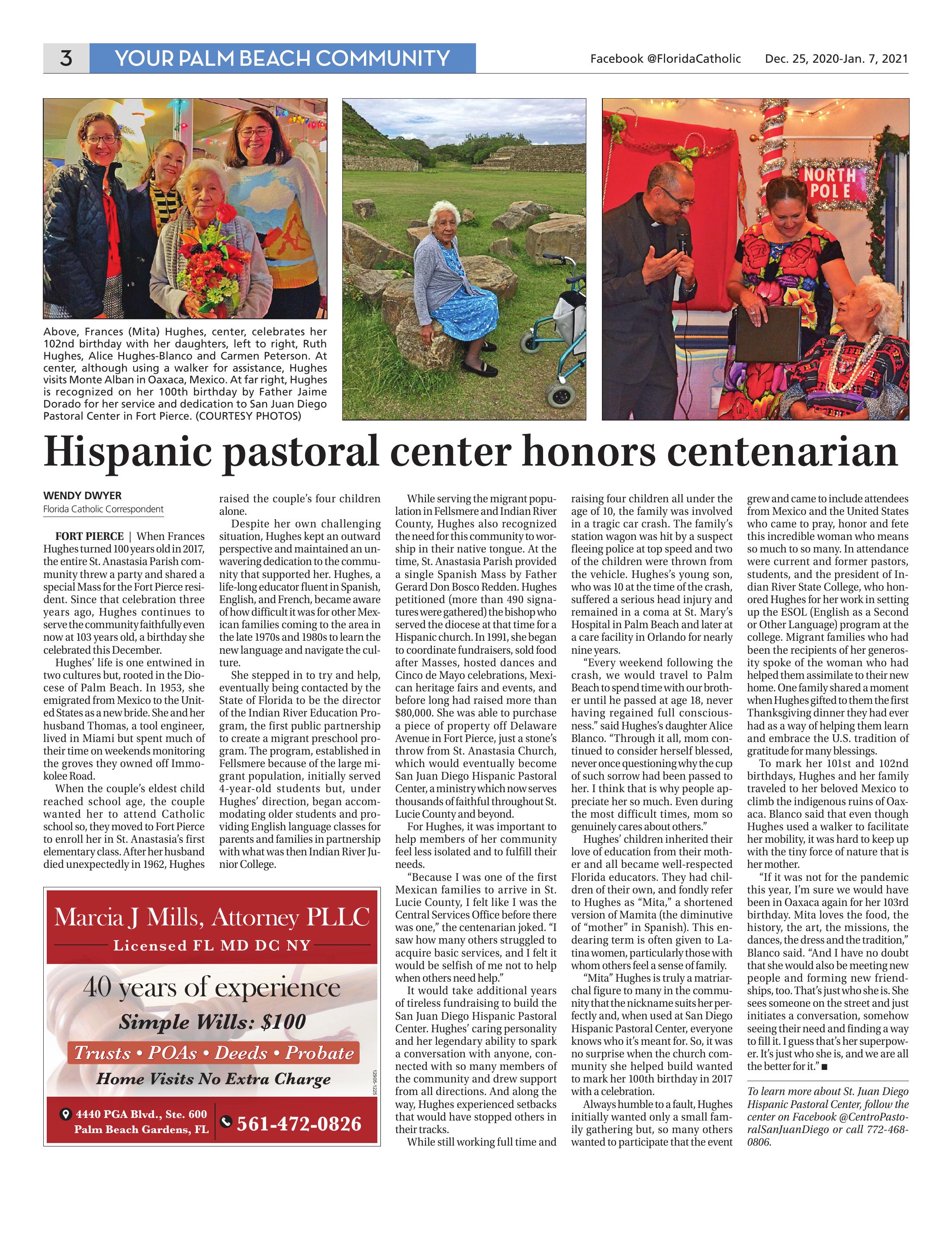 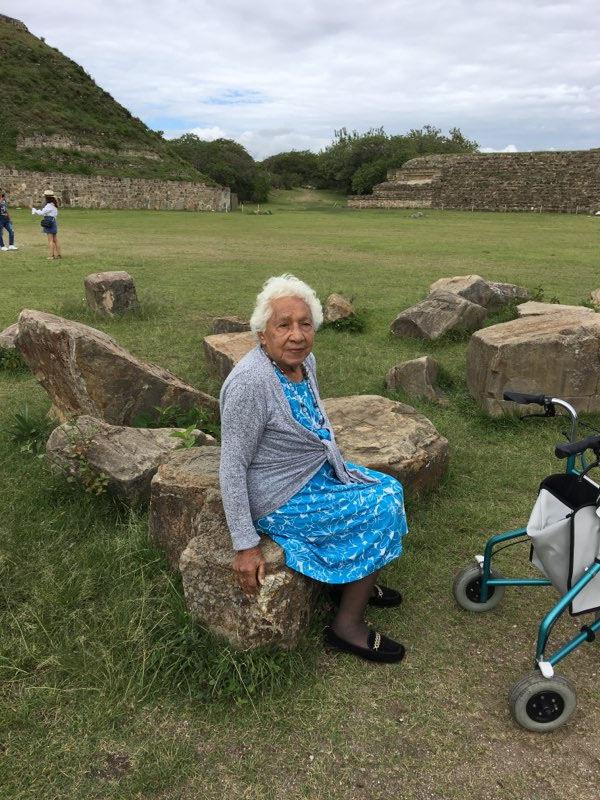 Although using a walker for assistance, Frances (Mita) Hughes visits Monte Alban in Oaxaca, Mexico with a youthful spirit and zest for life.

FORT PIERCE  |  When Frances Hughes turned 100 years old in 2017, the entire St. Anastasia Parish community threw a party and shared a special Mass for the Fort Pierce resident. Since that celebration three years ago, Hughes continues to serve the community faithfully even now at 103 years old, a birthday she celebrated this December.

Hughes’ life is one entwined in two cultures but, rooted in the Diocese of Palm Beach. In 1953, she emigrated from Mexico to the United States as a new bride. She and her husband Thomas, a tool engineer, lived in Miami but spent much of their time on weekends monitoring the groves they owned off Immokolee Road.

When the couple’s eldest child reached school age, the couple wanted her to attend Catholic school so, they moved to Fort Pierce to enroll her in St. Anastasia’s first elementary class. After her husband died unexpectedly in 1962, Hughes raised the couple’s four children alone.

Despite her own challenging situation, Hughes kept an outward perspective and maintained an unwavering dedication to the community that supported her. Hughes, a life-long educator fluent in Spanish, English, and French, became aware of how difficult it was for other Mexican families coming to the area in the late 1970s and 1980s to learn the new language and navigate the culture.

She stepped in to try and help, eventually being contacted by the State of Florida to be the director of the Indian River Education Program, the first public partnership to create a migrant preschool program. The program, established in Fellsmere because of the large migrant population, initially served 4-year-old students but, under Hughes’ direction, began accommodating older students and providing English language classes for parents and families in partnership with what was then Indian River Junior College. 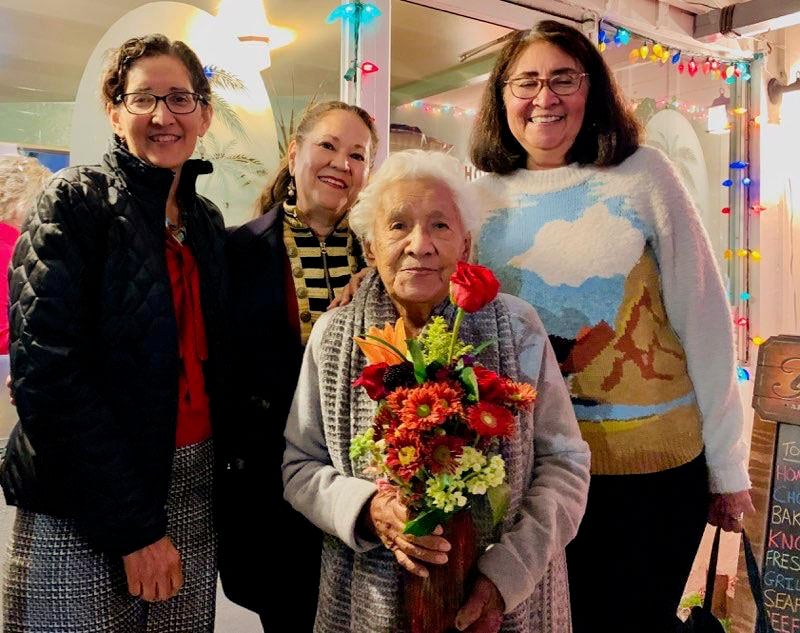 While serving the migrant population in Fellsmere and Indian River County, Hughes also recognized the need for this community to worship in their native tongue. At the time, St. Anastasia Parish provided a single Spanish Mass by Father Gerard Don Bosco Redden. Hughes petitioned (more than 490 signatures were gathered) the bishop who served the diocese at that time for a Hispanic church. In 1991, she began to coordinate fundraisers, sold food after Masses, hosted dances and Cinco de Mayo celebrations, Mexican heritage fairs and events, and before long had raised more than $80,000. She was able to purchase a piece of property off Delaware Avenue in Fort Pierce, just a stone’s throw from St. Anastasia Church, which would eventually become San Juan Diego Hispanic Pastoral Center, a ministry which now serves thousands of faithful throughout St. Lucie County and beyond.

For Hughes, it was important to help members of her community feel less isolated and to fulfill their needs.

“Because I was one of the first Mexican families to arrive in St. Lucie County, I felt like I was the Central Services Office before there was one,” the centenarian joked. “I saw how many others struggled to acquire basic services, and I felt it would be selfish of me not to help when others need help.”

It would take additional years of tireless fundraising to build the San Juan Diego Hispanic Pastoral Center. Hughes’ caring personality and her legendary ability to spark a conversation with anyone, connected with so many members of the community and drew support from all directions. And along the way, Hughes experienced setbacks that would have stopped others in their tracks.

While still working full time and raising four children all under the age of 10, the family was involved in a tragic car crash. The family’s station wagon was hit by a suspect fleeing police at top speed and two of the children were thrown from the vehicle. Hughes’s young son, who was 10 at the time of the crash, suffered a serious head injury and remained in a coma at St. Mary’s Hospital in Palm Beach and later at a care facility in Orlando for nearly nine years.

“Every weekend following the crash, we would travel to Palm Beach to spend time with our brother until he passed at age 18, never having regained full consciousness.” said Hughes’s daughter Alice Blanco. “Through it all, mom continued to consider herself blessed, never once questioning why the cup of such sorrow had been passed to her. I think that is why people appreciate her so much. Even during the most difficult times, mom so genuinely cares about others.”

Hughes’ children inherited their love of education from their mother and all became well-respected Florida educators. They had children of their own, and fondly refer to Hughes as “Mita,” a shortened version of Mamita (the diminutive of “mother” in Spanish). This endearing term is often given to Latina women, particularly those with whom others feel a sense of family.

“Mita” Hughes is truly a matriarchal figure to many in the community that the nickname suits her perfectly and, when used at San Diego Hispanic Pastoral Center, everyone knows who it’s meant for. So, it was no surprise when the church community she helped build wanted to mark her 100th birthday in 2017 with a celebration.

Always humble to a fault, Hughes initially wanted only a small family gathering but, so many others wanted to participate that the event grew and came to include attendees from Mexico and the United States who came to pray, honor and fete this incredible woman who means so much to so many. In attendance were current and former pastors, students, and the president of Indian River State College, who honored Hughes for her work in setting up the ESOL (English as a Second or Other Language) program at the college. Migrant families who had been the recipients of her generosity spoke of the woman who had helped them assimilate to their new home. One family shared a moment when Hughes gifted to them the first Thanksgiving dinner they had ever had as a way of helping them learn and embrace the U.S. tradition of gratitude for many blessings.

To mark her 101st and 102nd birthdays, Hughes and her family traveled to her beloved Mexico to climb the indigenous ruins of Oaxaca. Blanco said that even though Hughes used a walker to facilitate her mobility, it was hard to keep up with the tiny force of nature that is her mother.

“If it was not for the pandemic this year, I’m sure we would have been in Oaxaca again for her 103rd birthday. Mita loves the food, the history, the art, the missions, the dances, the dress and the tradition,” Blanco said. “And I have no doubt that she would also be meeting new people and forming new friendships, too. That’s just who she is. She sees someone on the street and just initiates a conversation, somehow seeing their need and finding a way to fill it. I guess that’s her superpower. It’s just who she is, and we are all the better for it.”