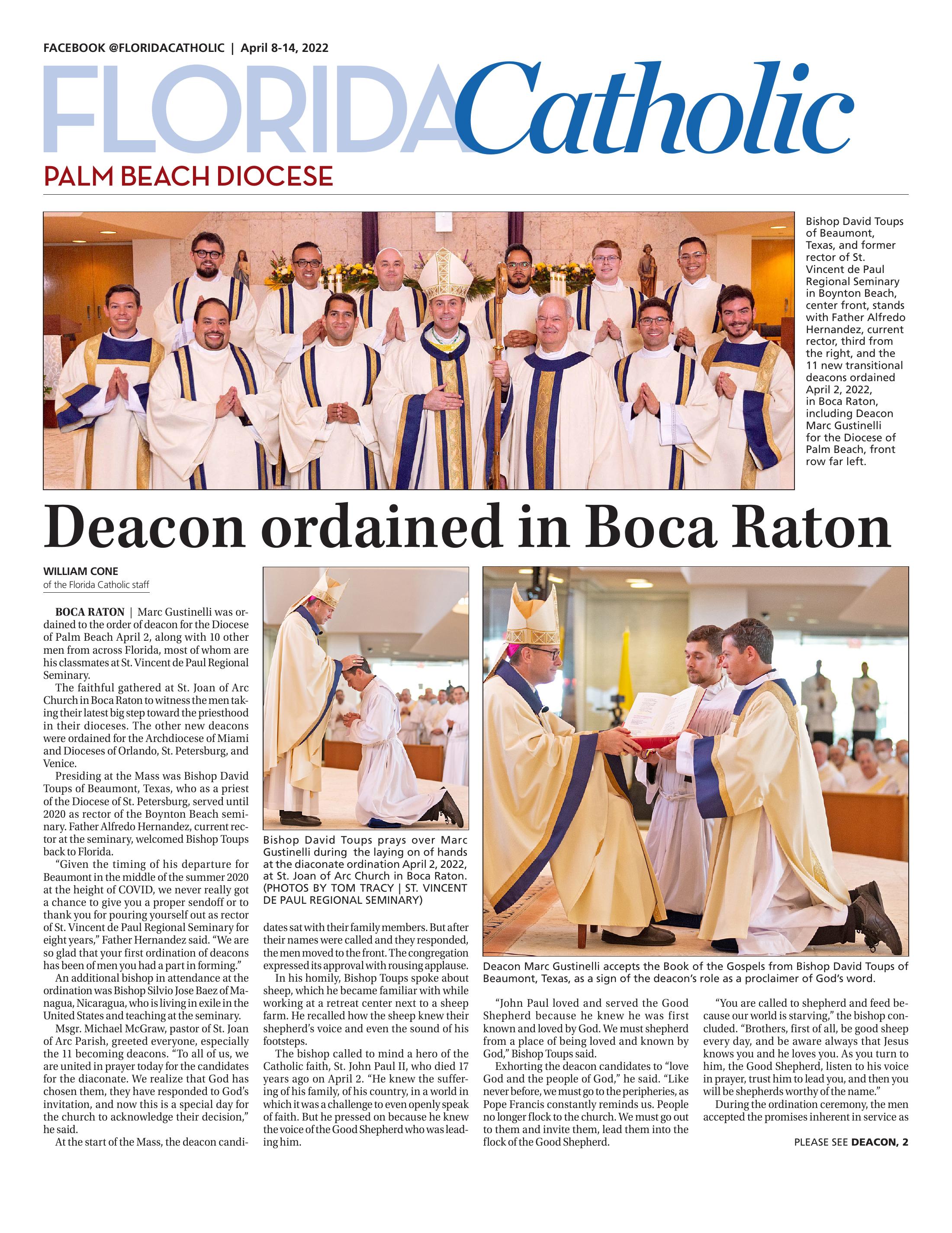 Seminarian Marc Gustinelli stands in the pews of St. Joan of Arc Parish in Boca Raton next to his mother, Lisa, and his father, Bruno, stands directly behind him along with other family members during his transitional diaconate ordination Mass.

BOCA RATON  |  Marc Gustinelli was ordained to the order of deacon for the Diocese of Palm Beach April 2, along with 10 other men from across Florida, most of whom are his classmates at St. Vincent de Paul Regional Seminary.

The faithful gathered at St. Joan of Arc Church in Boca Raton to witness the men taking their latest big step toward the priesthood in their dioceses. The other new deacons were ordained for the Archdiocese of Miami and Dioceses of Orlando, St. Petersburg, and Venice. 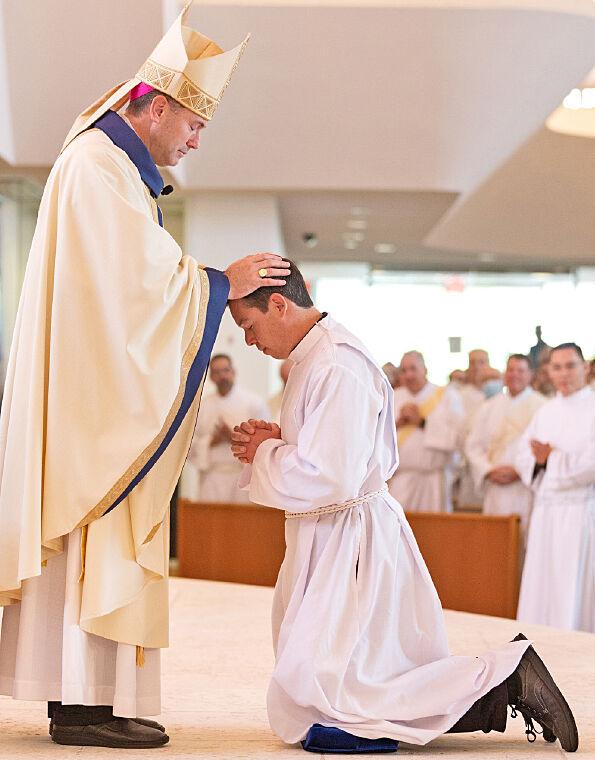 Bishop David Toups prays over Marc Gustinelli during the laying on of hands at the diaconate ordination April 2, 2022, at St. Joan of Arc Church in Boca Raton..

Presiding at the Mass was Bishop David Toups of Beaumont, Texas, who as a priest of the Diocese of St. Petersburg, served until 2020 as rector of the Boynton Beach seminary. Father Alfredo Hernandez, current rector at the seminary, welcomed Bishop Toups back to Florida.

“Given the timing of his departure for Beaumont in the middle of the summer 2020 at the height of COVID, we never really got a chance to give you a proper sendoff or to thank you for pouring yourself out as rector of St. Vincent de Paul Regional Seminary for eight years,” Father Hernandez said. “We are so glad that your first ordination of deacons has been of men you had a part in forming.”

An additional bishop in attendance at the ordination was Bishop Silvio Jose Baez of Managua, Nicaragua, who is living in exile in the United States and teaching at the seminary.

Msgr. Michael McGraw, pastor of St. Joan of Arc Parish, greeted everyone, especially the 11 becoming deacons. “To all of us, we are united in prayer today for the candidates for the diaconate. We realize that God has chosen them, they have responded to God’s invitation, and now this is a special day for the church to acknowledge their decision,” he said. 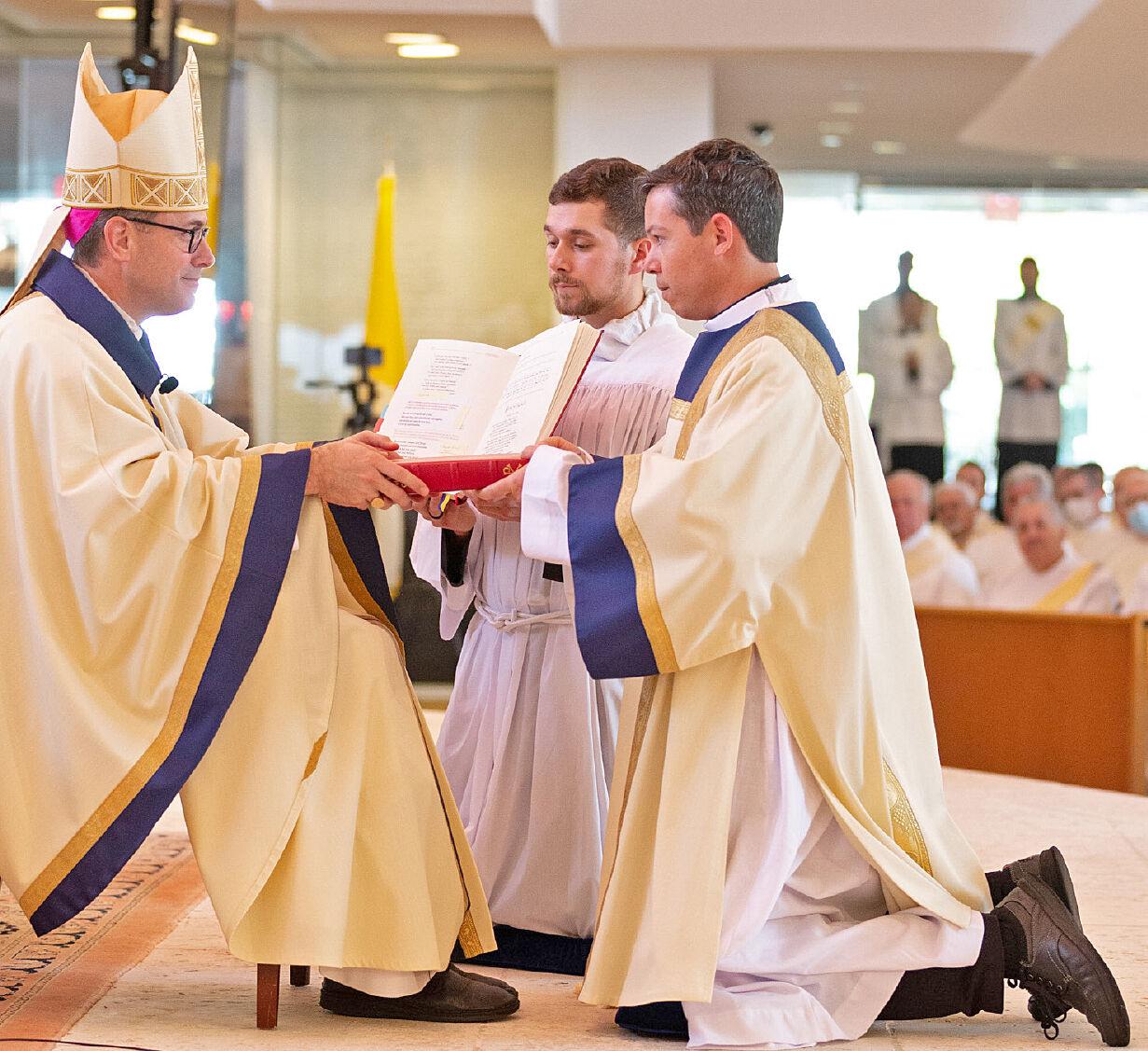 Newly ordained Deacon Marc Gustinelli accepts the Book of the Gospels from Bishop David Toups of Beaumont, Texas, as a sign of the deacon's role as a proclaimer of God's word.

At the start of the Mass, the deacon candidates sat with their family members. But after their names were called and they responded, the men moved to the front. The congregation expressed its approval with rousing applause.

In his homily, Bishop Toups spoke about sheep, which he became familiar with while working at a retreat center next to a sheep farm. He recalled how the sheep knew their shepherd’s voice and even the sound of his footsteps.

The bishop called to mind a hero of the Catholic faith, St. John Paul II, who died 17 years ago on April 2. “He knew the suffering of his family, of his country, in a world in which it was a challenge to even openly speak of faith. But he pressed on because he knew the voice of the Good Shepherd who was leading him.

“John Paul loved and served the Good Shepherd because he knew he was first known and loved by God. We must shepherd from a place of being loved and known by God,” Bishop Toups said.

Exhorting the deacon candidates to “love God and the people of God,” he said. “Like never before, we must go to the peripheries, as Pope Francis constantly reminds us. People no longer flock to the church. We must go out to them and invite them, lead them into the flock of the Good Shepherd.

“You are called to shepherd and feed because our world is starving,” the bishop concluded. “Brothers, first of all, be good sheep every day, and be aware always that Jesus knows you and he loves you. As you turn to him, the Good Shepherd, listen to his voice in prayer, trust him to lead you, and then you will be shepherds worthy of the name.”

During the ordination ceremony, the men accepted the promises inherent in service as deacons, such as obedience to their bishop, celibacy and selfless service to the church. While the faithful sang a litany to the saints, the deacon candidates lay prostrate on the floor as a sign of humility and deep prayer. A bit later, the new deacons donned the stole and dalmatic, vestments that symbolize diaconal ministry.

Early in the Mass, Deacon Daniel Donohue, who was ordained a deacon last year and is scheduled to be ordained a priest next month, was seated next to Bishop Toups and proclaimed the Gospel, as deacons typically do at liturgies. After the ordination rite, Deacon Gustinelli and another new deacon moved up to sit next to the bishop to assist him during the liturgy of the Eucharist.

Following the Mass, Deacon Gustinelli expressed gratitude for having his family in attendance as he moved closer to the priesthood. His mother, Lisa Gustinelli, talked about how hard he had worked.

“People don’t realize this is six years after he graduated from the university with a bachelor’s degree,” she said. “He’s put so much time and effort into it. Then I just remember back to all the Sundays going to Mass,” admitting to a few tears at the liturgy.

His father, Bruno Gustinelli, said he will continue to pray for his son as he moves toward ordination as a priest next year. “I’m happy that he’s a deacon. I love what happened. It’s a wonderful thing. And I’m so happy to have all of the family together.”

To learn more about priestly formation in the Diocese of Palm Beach, visit https://www.diocesepb.org/ministriesoffices/ministries/vocations/seminarians.html.