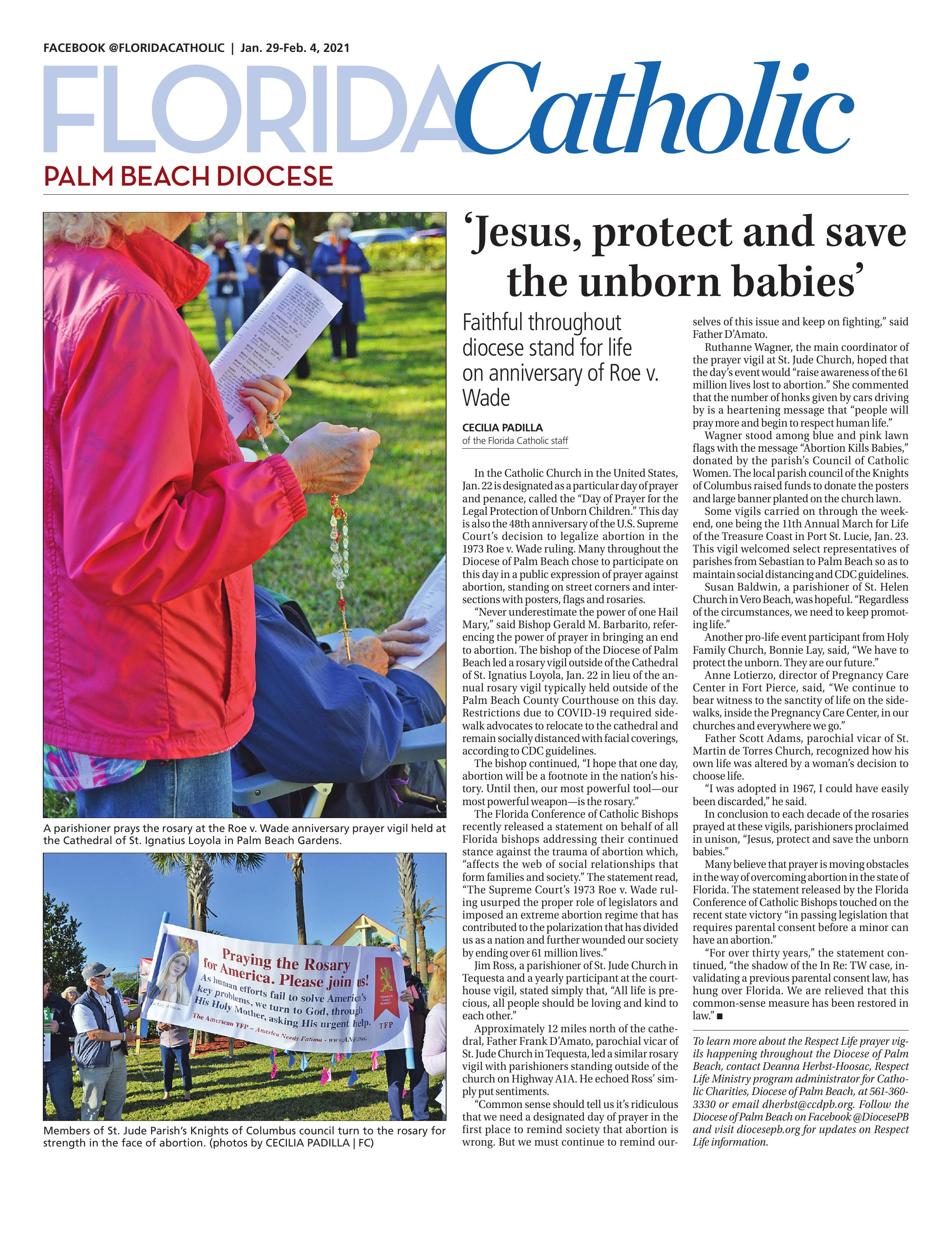 Palm-beach
“Jesus, Protect and Save the Unborn Babies” 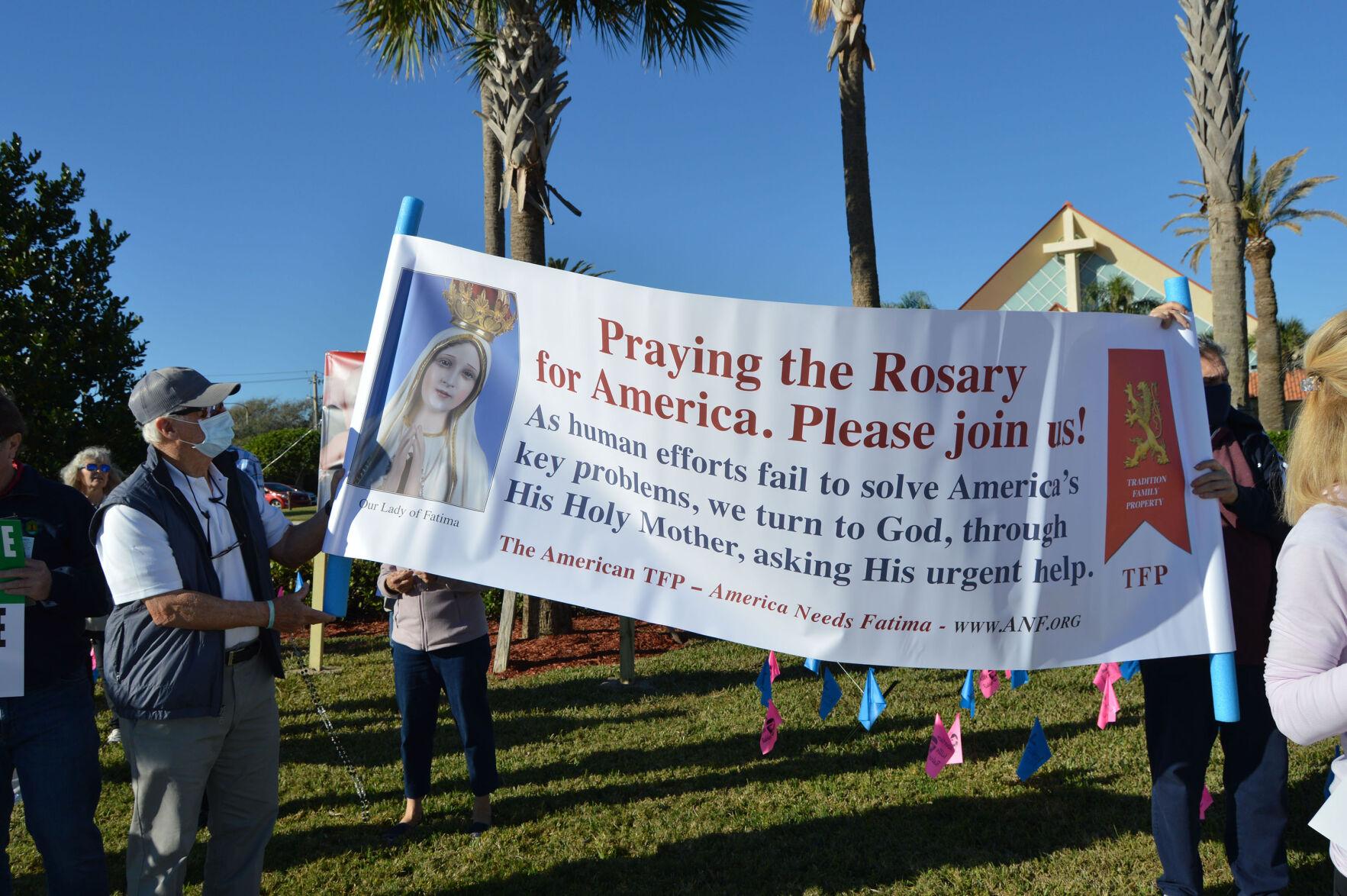 Members of St. Jude Parish's Knights of Columbus council turn to the rosary for strength in the face of abortion. (CECILIA PADILLA-FC)

In the Catholic Church in the United States, Jan. 22 is designated as a particular day of prayer and penance, called the “Day of Prayer for the Legal Protection of Unborn Children.” This day is also the 48th anniversary of the U.S. Supreme Court’s decision to legalize abortion in the 1973 Roe v. Wade ruling. Many throughout the Diocese of Palm Beach chose to participate on this day in a public expression of prayer against abortion, standing on street corners and intersections with posters, flags and rosaries.

“Never underestimate the power of one Hail Mary,” said Bishop Gerald M. Barbarito, referencing the power of prayer in bringing an end to abortion. The bishop of the Diocese of Palm Beach led a rosary vigil outside of the Cathedral of St. Ignatius Loyola, Jan. 22 in lieu of the annual rosary vigil typically held outside of the Palm Beach County Courthouse on this day. Restrictions due to COVID-19 required sidewalk advocates to relocate to the cathedral and remain socially distanced with facial coverings, according to CDC guidelines.

The Florida Conference of Catholic Bishops recently released a statement on behalf of all Florida bishops addressing their continued stance against the trauma of abortion which, “affects the web of social relationships that form families and society.” The statement read, “The Supreme Court’s 1973 Roe v. Wade ruling usurped the proper role of legislators and imposed an extreme abortion regime that has contributed to the polarization that has divided us as a nation and further wounded our society by ending over 61 million lives.”

Jim Ross, a parishioner of St. Jude Church in Tequesta and a yearly participant at the courthouse vigil, stated simply that, “All life is precious, all people should be loving and kind to each other.”

“Common sense should tell us it’s ridiculous that we need a designated day of prayer in the first place to remind society that abortion is wrong. But we must continue to remind ourselves of this issue and keep on fighting,” said Father D’Amato.

Ruthanne Wagner, the main coordinator of the prayer vigil at St. Jude Church, hoped that the day’s event would “raise awareness of the 61 million lives lost to abortion.” She commented that the number of honks given by cars driving by is a heartening message that “people will pray more and begin to respect human life.”

Wagner stood among blue and pink lawn flags with the message “Abortion Kills Babies,” donated by the parish’s Council of Catholic Women. The local parish council of the Knights of Columbus raised funds to donate the posters and large banner planted on the church lawn.

Some vigils carried on through the weekend, one being the 11th Annual March for Life of the Treasure Coast in Port St. Lucie, Jan. 23. This vigil welcomed select representatives of parishes from Sebastian to Palm Beach so as to maintain social distancing and CDC guidelines.

Susan Baldwin, a parishioner of St. Helen Church in Vero Beach, was hopeful. “Regardless of the circumstances, we need to keep promoting life.”

Another pro-life event participant from Holy Family Church, Bonnie Lay, said, “We have to protect the unborn. They are our future.”

Father Scott Adams, parochial vicar of St. Martin de Torres Church, recognized how his own life was altered by a woman’s decision to choose life.

In conclusion to each decade of the rosaries prayed at these vigils, parishioners proclaimed in unison, “Jesus, protect and save the unborn babies.”

Many believe that prayer is moving obstacles in the way of overcoming abortion in the state of Florida. The statement released by the Florida Conference of Catholic Bishops touched on the recent state victory “in passing legislation that requires parental consent before a minor can have an abortion.”

“For over thirty years,” the statement continued, “the shadow of the In Re: TW case, invalidating a previous parental consent law, has hung over Florida. We are relieved that this common-sense measure has been restored in law.”