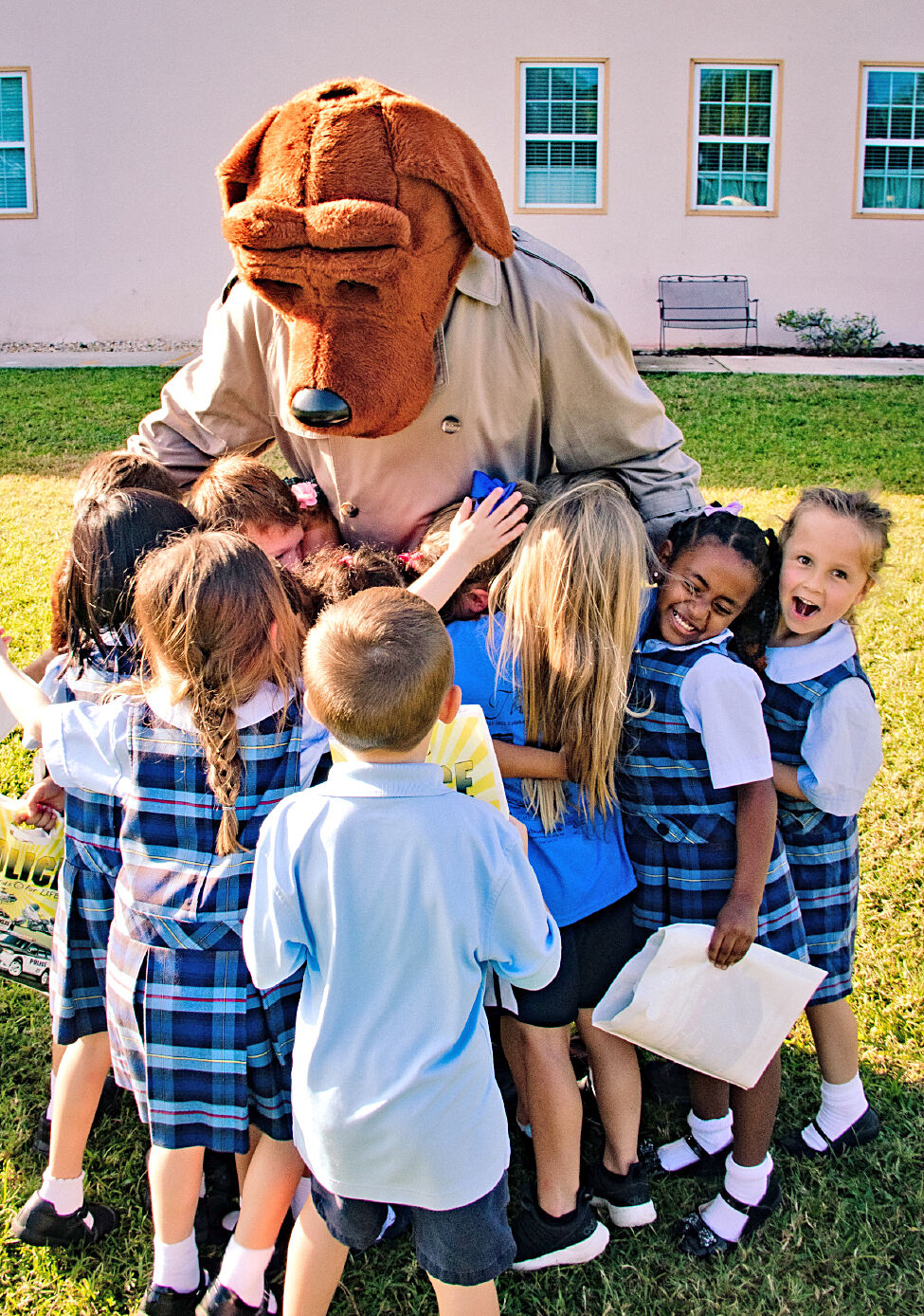 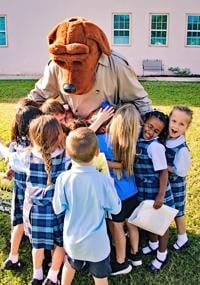 Students from Epiphany Cathedral Catholic School in Venice McGruff the Crime Dog during a visit by the Venice Police Department on Oct. 7, 2021 as part of Faith and Blue Weekend. 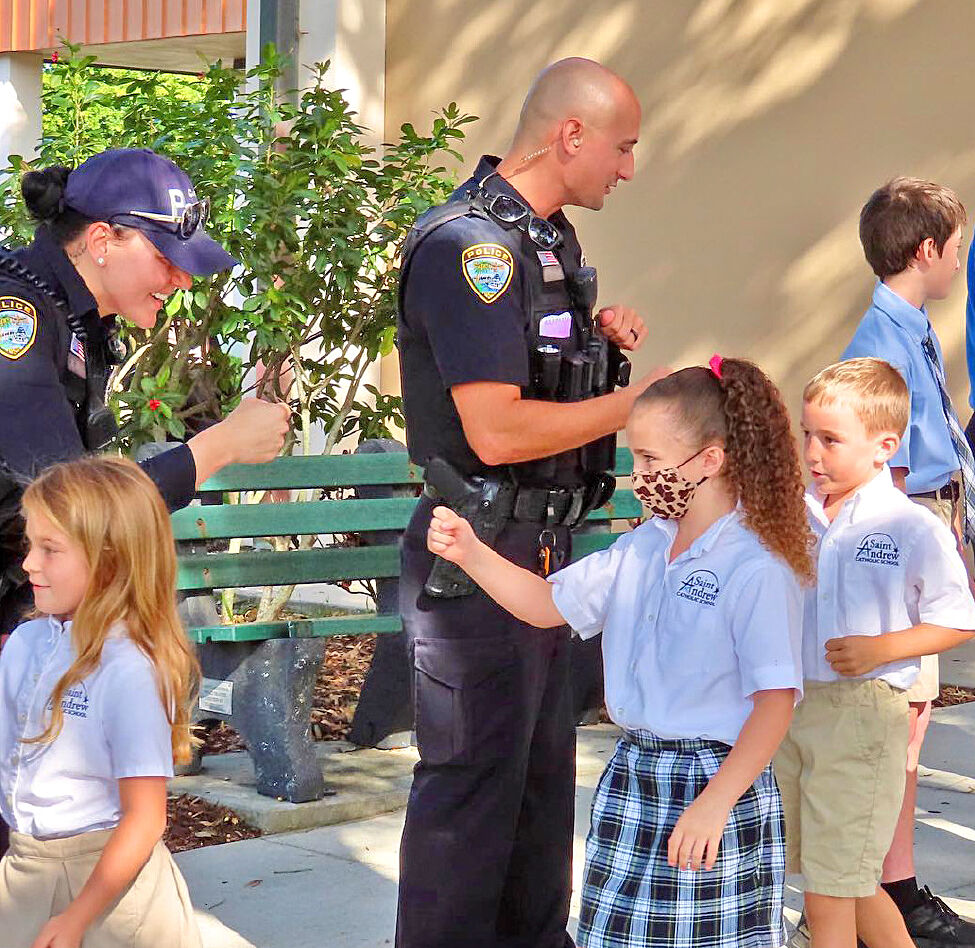 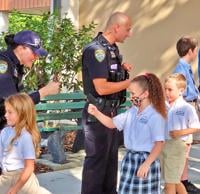 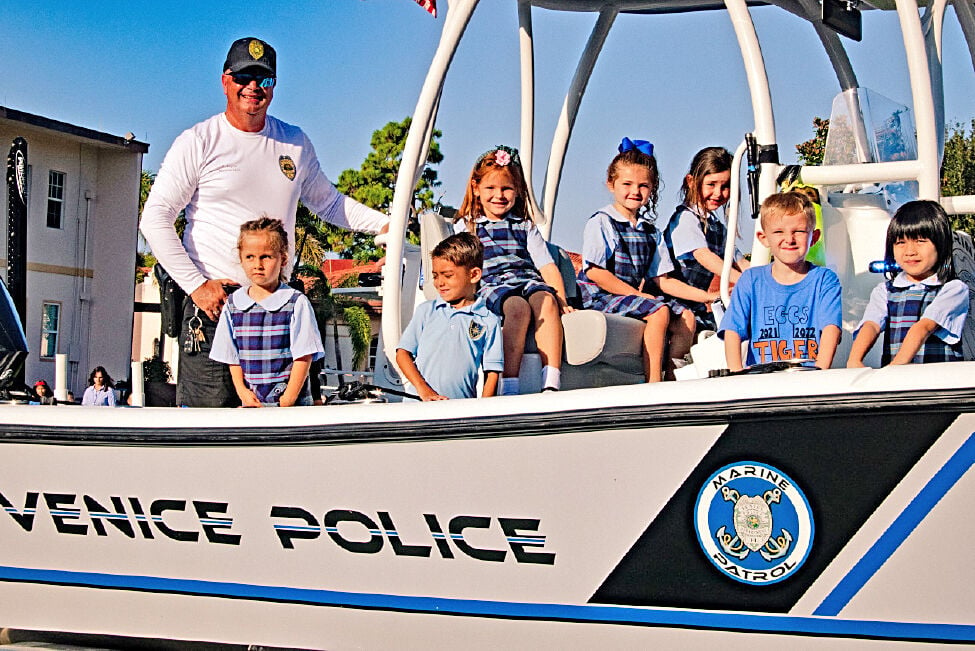 Students from Epiphany Cathedral Catholic School in Venice enjoy the Venice Police Department boat during a visit on Oct. 7, 2021 as part of Faith and Blue Weekend. 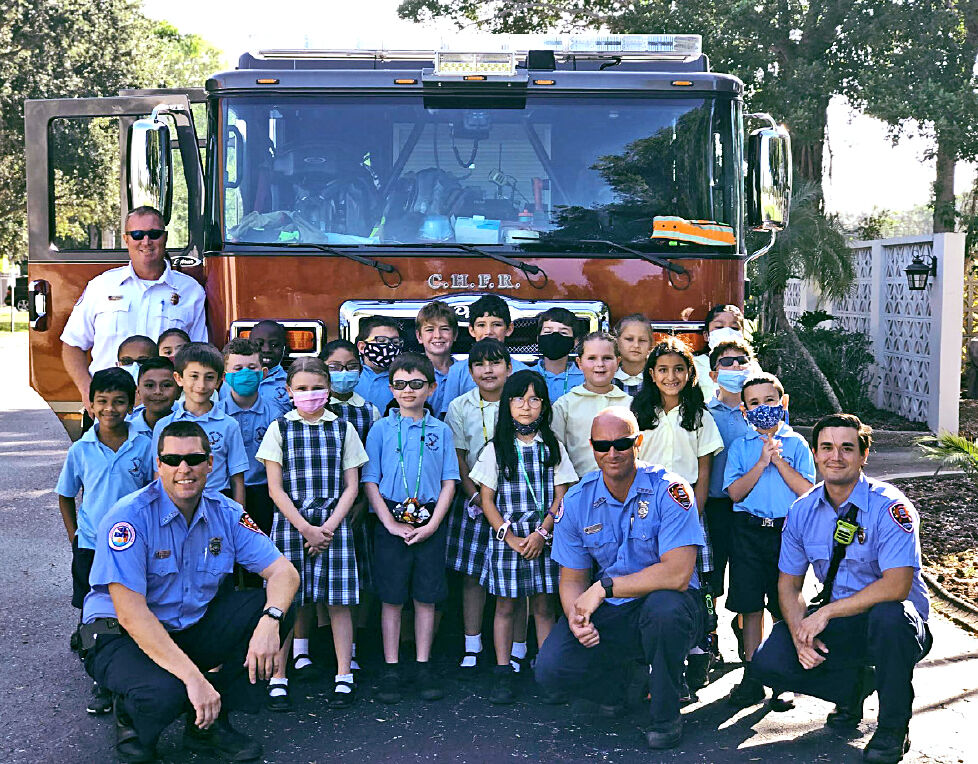 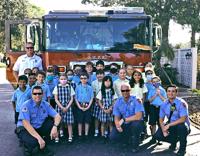 Members of the Cedar Hammock Fire Rescue in Bradenton visit St. Joseph Catholic School as part of Faith and Blue Weekend on Oct. 7, 2021.

Students from Epiphany Cathedral Catholic School in Venice enjoy the Venice Police Department boat during a visit on Oct. 7, 2021 as part of Faith and Blue Weekend.

Members of the Cedar Hammock Fire Rescue in Bradenton visit St. Joseph Catholic School as part of Faith and Blue Weekend on Oct. 7, 2021.

VENICE  |  The words resonated across the Epiphany Cathedral Catholic School’s recreation field as hundreds of students, faculty, and their guests in dark blue uniforms recited the prayer to St. Michael:

St. Michael the Archangel, defend us in battle. Be our defense against the wickedness and snares of the Devill. May God rebuke him, we humbly pray, and do thou, O Prince of the heavenly hosts, by the power of God, thrust into hell Satan, and all the evil spirits, who prowl about the world seeking the ruin of souls. Amen.

The prayer concluded the opening ceremony for Epiphany Cathedral School’s celebration of National Faith and Blue Weekend Oct. 7, 2021, on its campus in Venice. The event recognized Faith and Blue’s campaign to develop safer and stronger communities across the nation by unifying law enforcement professionals with their local faith-based organizations.

“Faith and Blue helps the Venice community understand that the values of its police officers are aligned with the people they have sworn to serve and protect,” said Lt. Andy Leisenring, director of the Venice Police Department’s special operations bureau. “The department is grateful for the opportunity to visit Epiphany Cathedral School and celebrate a common culture of service and respect.”

Organized by Erin Phillips, third-grade teacher, in conjunction with the Venice and North Port police departments, the event showcased a myriad of crime fighting tools, gadgets, vehicles and equipment. The officers invited every student to sit in a police car, climb aboard a patrol boat, and activate their sirens. The students also learned about crime scene investigation and met one of Venice PD’s K9s and McGruff the Crime Dog.

“Giving children a hands-on experience is the best way to show that (we) are here for their safety,” said Sgt. Scott Smith with the North Port Police Department. “It’s important to show them firsthand that we do a lot more than what they see in the media.”

Smith, whose daughter, Reagan, entered her fourth year at Epiphany, believes the connection between the school and the Venice law enforcement community is made stronger by their shared values and beliefs.

“Both the Epiphany Cathedral School and the local law enforcement community build stronger relationships by striving to do what’s right,” said Smith, a 25-year veteran of the North Port and Bradenton police departments. “We share God’s word through good deeds that promote peace and respect. ECS infuses these values in its curriculum. That’s why I enrolled Reagan here. … So that she may excel academically and grow in the Catholic faith.”

“This event shows students that service and our Catholic identity extends beyond the campus,” she said. “Epiphany Cathedral School is part of a larger community that supports and safeguards them. One day this same community will look to these same students for their service and leadership as Disciples of Christ.”

Students gave handwritten thank-you cards to everyone wearing a badge that day, whose usually stoic faces gave way to smiles as the officers opened and read the cards aloud to one another.

“That’s how Epiphany Cathedral School and the Diocese of Venice cares for those who care for the community,” Loseto said. “Faith and Blue Weekend is just one example of how service is rooted in the teachings and traditions of the Catholic Church and its schools.”

Many Diocesan Catholic Schools and Parishes celebrated National Faith and Blue Weekend from Oct. 7-10, through prayers and formal ceremonies for those who are dedicated to protecting and serving the community. St. Andrew Catholic School in Cape Coral hosted a ceremony honoring local members of law enforcement. Students gave each guest a St. Michael the Archangel pin and greeted them with fist bumps and “thank you’s!”

St. Joseph Catholic School in Bradenton had a visit from the Cedar Hammock Fire Rescue. The students shared the tradition at the school of praying for first responders, and when they hear a siren, they stop what they are doing and immediately pray for the victims and the first responders. The firefighters were very touched to learn that the students remember them in prayer.

John Carkeet is the marketing coordinator for the Diocese of Venice Office of Catholic Education. He can be reached at carkeet@dioceseofvenice.org.