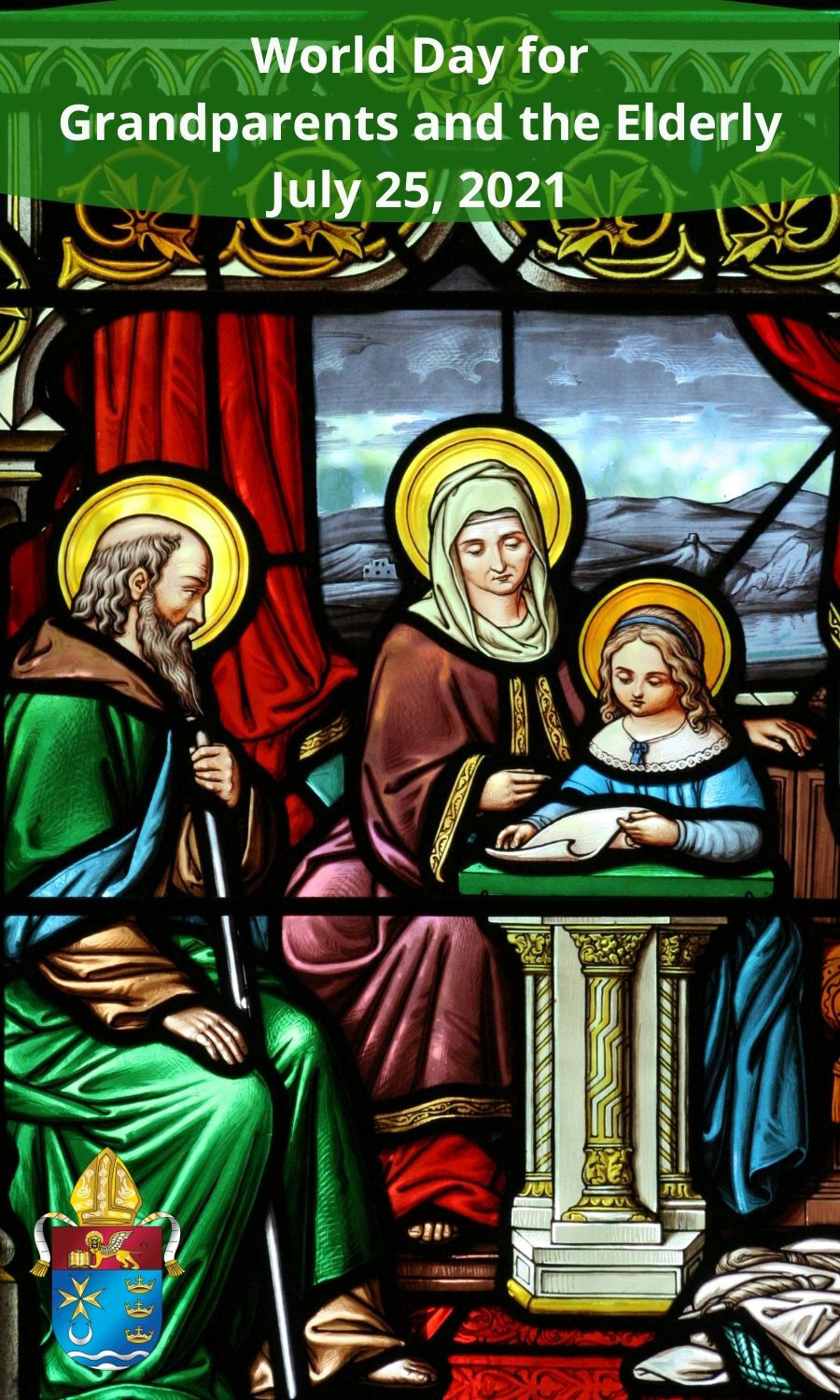 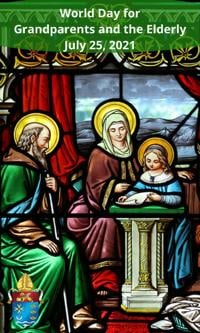 This image is of Saints Anne, Joachim and Mary, the Grandparents and Mother of Jesus and adorned the cover of a prayer card created for the World Day for Grandparents and the Elderly July 25, 2021. 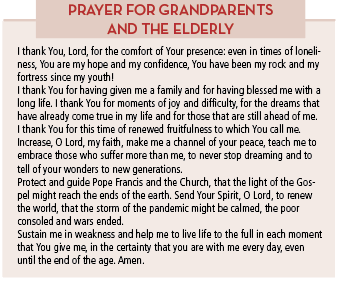 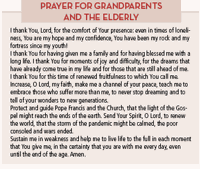 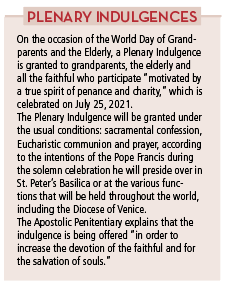 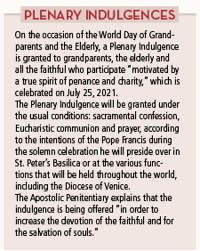 VENICE  |  On March 19, 2021, Pope Francis inaugurated the Year of Amoris Laetitia Family, an initiative that offers the Church an opportunity to celebrate and reflect on the central role the family plays in transmitting the Gospel and shaping society.

In conjunction with this yearlong initiative and recognizing the key role grandparents play in the family, this past January Pope Francis established the World Day for Grandparents and the Elderly, to take place annually on the fourth Sunday of July, close to the feast of the grandparents of Jesus, Sts. Anne and Joachim. The theme for this first celebration occurring on July 25 is “I am with you always” (Mt 28:20).

In Amoris Laetitia, the document issued to address the complex situations the family faces today, the Holy Father reminds us that, “we must reawaken the collective sense of gratitude, of appreciation, of hospitality, which makes the elderly feel like a living part of the community” (AL 191).  They still have important work to do in building up the body of Christ as they comprise a significant part of Catholic laity. This celebration is established to treasure the elderly and cherish the gifts they bring.

Modern society advances concepts disregarding human life; through abortion and euthanasia — throw away concepts for those deemed not productive to society rather than reawakening this sense of gratitude and appreciation for all life.  Yet the Church reminds all are called to overcome this “throw-away” culture and societal indifference by witnessing the love of Christ to people in all stages of life.  Our grandparents and elderly must not be neglected, isolated, or disregarded.

The hearts of seniors feel the pain of their beloved family members falling away from the faith. The concerning statistics are well known, particularly to grandparents — declining Mass attendance, declining belief in the True Presence of Christ in the Eucharist, and young people leaving the Faith shortly after being confirmed.  Through their witness and prayers, grandparents play a crucial role towards reversing these trends.  In his message to grandparents and the elderly, Pope Francis reminds the faithful that, “there is no retirement age from the work of proclaiming the Gospel and handing down traditions to grandchildren.”

Generations of seniors provide an invaluable resource to society and following generations. Their words and example can foster a rich awareness in children. That “history did not begin with them, that they are now part of an age-old pilgrimage and that they need to respect all that came before them” (AL 192). Grandparents give a tie to the past, ensuring the most important values are transmitted.

I recall fondly my own grandmother and the encouragement in faith she provided.  It was the simple things that left such an impact which remain embedded in memories. Through summers spent attending daily morning Mass with her, always stopping after lunch to pray the Angelus, reading Bible stories on the couch, and hearing instruction on the lives of the saints, she helped shaped the Catholic woman I am today.

In addition to sharing their faith, grandparents are in a privileged place to be a powerful intercessor for the young people. Pope Emeritus Benedict XVI called attention to the gift of prayers the elderly provide. Their prayers “can protect the world, helping it perhaps more effectively than the frenetic activity of many others” (Visit to the Group Home, “Viva gli Anziani”, Nov. 2, 2012.).

On this World Day for Grandparents, let us join Pope Francis and the entire Church in celebrating all grandparents by a gift of presence, tenderness, and a renewed appreciation for them.  Now is the time to pick up the phone, go visit, bring them their favorite candy—something to show them you care.

The Vatican has granted a Plenary Indulgence to all elderly who participate in one of the Masses celebrated for this occasion. In addition, all the faithful who perform the Corporal Work of Mercy on of visiting an elderly person who is alone on July 25 will also obtain a Plenary Indulgence (the usual requirements for obtaining a plenary indulgence apply).

During the coming months, this column will periodically feature the ongoing efforts in promotion of this Year of Amoris Laetitia Family, and related Diocesan efforts (conferences, workshops and access to resources resources), while also inviting participation as we journey together to rediscover the family as a gift — a gift from God.

Carrie Harkey is the Diocese of Venice Family Life Coordinator and can be reached at 941-484-9543 or harkey@dioceseofvenice.org.