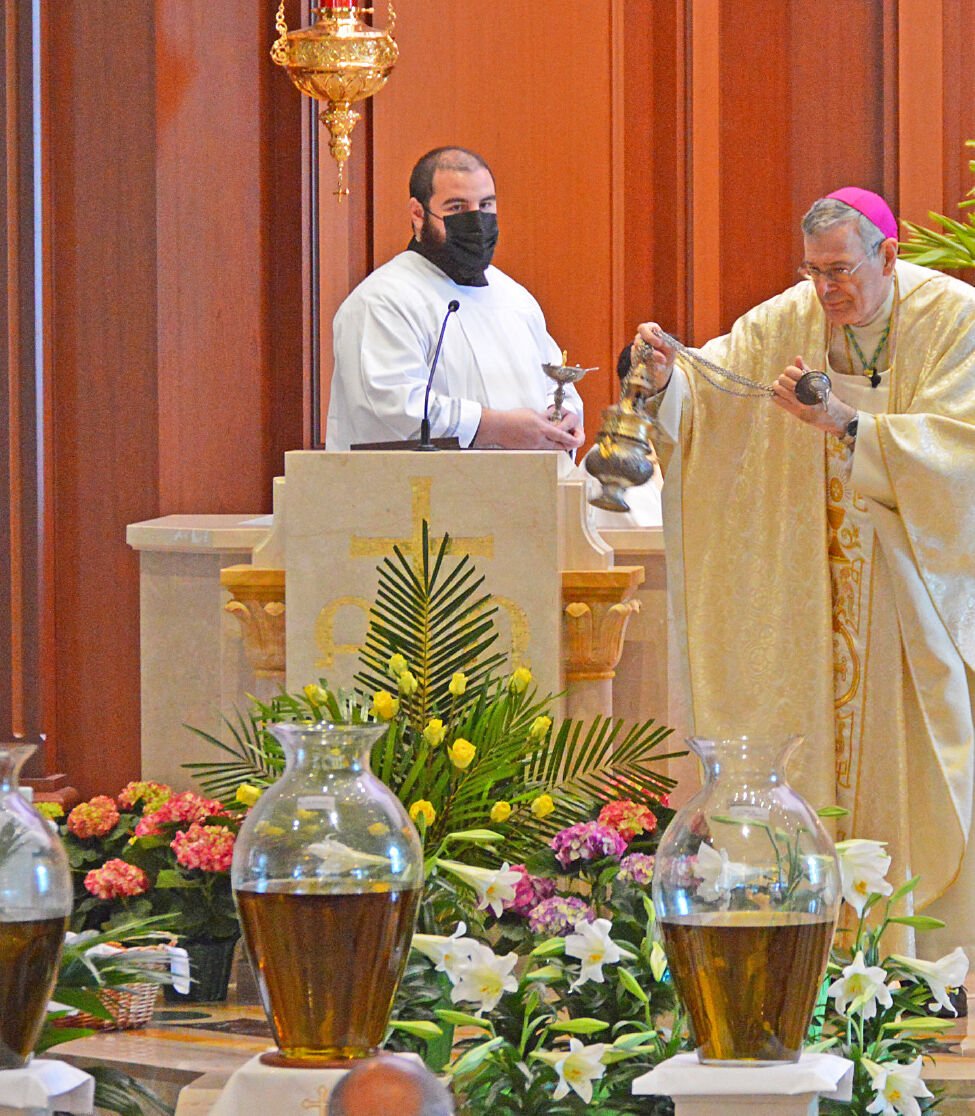 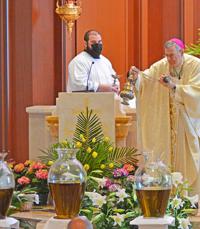 Bishop Barbarito celebrated the Chrism Mass with his brother priests, clergy and religious at the Cathedral of St. Ignatius Loyola, March 30, 2021. The Chrism Mass is a significant one for all of us: priests, deacons, women and men in consecrated life and all of the lay faithful. Through the Consecration of Chrism and the Blessing of Oils we are reminded of the call that each of us possesses to a personal relationship with God. This relationship is encountered and nurtured through the sacramental life of the Church in which the chrism and oils have a significant role. Today we celebrate that we are all one people of God who support each other in our relationship with the Lord. That relationship comes to fruition in the life of the Church from our anointing at Baptism until our final anointing before entrance into the fullness of God’s Kingdom.

The Chrism Mass has a particular significance for the priest as he is the usual minister of the Chrism and Oils used in the Sacraments. Their consecration and blessing confirm his identity, both as a member of God’s people and as the one who ministers to God’s people in the Person of Jesus Christ. That is why, at this Mass, our dedicated and wonderful priests affirm their identities as priests through their public commitment of the renewal of their priestly promises in service to all of us.

How good it is for all of us to be here today, both those physically present and those joining us by means of livestream. Last year’s Chrism Mass occurred almost at the beginning of the time when our churches were closed for public worship. The Mass was celebrated with a very small portion of the Presbyterate able to be present for it. While we are still under limited attendance this year, those present here this morning signify the progress we have made in combating the pandemic as well as the continued need for the vigilance we have to follow. I thank all of you for your cooperation in making public worship at a Catholic church one of the safest places to be. I especially thank our priests for the not so easy task of putting safety measures into practice in their parishes especially at a time when opinion has varied as to what is best and frustration has sometimes strongly exhibited itself.

As we celebrate this Chrism Mass, we do so during the Year of St. Joseph initiated in the life of the Church by Pope Francis. St. Joseph is someone who is a model for each and every one of us, no matter to what state of life God has called us. In his Apostolic Letter on St. Joseph, With a Father’s Heart, Pope Francis expressed that St. Joseph is “so close to our own human experience.” However, as he expounded upon the Saint, he did so with the emphasis on St. Joseph having the heart of a father. In this context, I would like to reflect upon St. Joseph as a particular model for priests.

A priest is primarily known as “Father” and being a father with the heart of a father is at the core of a priest’s ministry. Less than two weeks ago, immediately before the Feast of St. Joseph, Pope Francis spoke to a group of priests and seminarians at the Belgian Pontifical College in Rome. He reflected upon St. Joseph as a model for the priests emphasizing the Saint’s role as a “welcoming father.”

As priests, we look to St. Joseph, seeing in him what must be primary in our ministry - prayer. St. Joseph, above all, was a man of prayer and deep union with God. His contemplative attitude did not detract from his role as a father, but deepened it. Being a father and being in union with the Lord are inseparable. When a father loses his sense of identity with his wife and children, his role as a father is in jeopardy. When a priest loses his sense of identity as being primarily in union with the Lord through the Eucharist, in the sacraments and in contemplation, his role as father is likewise compromised.

A priest is ordained to lead others to Christ, and when his fatherhood in prayer takes a secondary role to being an administrator, a public figure, an enabler of others, as important as these may be, he is no longer carrying out his fundamental role and will be also ineffective in the others. St. Joseph was a man of few words, none of which are even spoken in the Gospels, as his heart was with God. This is what energized his fatherhood and relationship with Mary and Jesus.

St. Joseph was a man of deep humility. He did not put himself first, but always first for him were Jesus and Mary. He never expected the role to which God had called him, but accepted it in trust and confidence in God’s grace. St. Joseph’s humility was the key to his loving authority in his relationship with Jesus and Mary who were sinless. He was humbled to support them with a father’s heart and to be a source of example to them in prayer when he knew he was far from their union with God. How often, we as priests realize this reality in our relationship with the people that we serve who so many times lead extraordinary lives of holiness. We are rightly humbled by them. Nevertheless, the people come to us for advice, prayer, and support. Our humility must recognize that they do because God has given the role of father to us, as imperfect as we may be and as far from the people’s holiness as we may be. His grace will not let us down and the recognition of our inadequacies with humility will enable us to minister with the father’s heart as did St. Joseph.

St. Joseph was a working father. He was known as a carpenter and many images portray Jesus learning from him the ability of working with wood. We, as priests, carry out a loving labor and service to our people, day in and day out. As with a father, there are no set hours to our day and no limits to what we are called upon to do. We face new challenges each day and sometimes have to work with broken and limited tools. While we rightly learn that we cannot do everything, we also learn that we just cannot do nothing. We are able to carry out our labor because our primary labor is our prayer. While people rightly look to us for many things, they primarily look to us for prayer and for example in prayer.

St. Joseph was a courageous father. While unspoken and not dominating, he showed great strength of courage. We, as priests, especially today, need courage to proclaim a message that is often disapproved of in so many ways. From proclaiming the dignity of life at every stage, the sanctity of marriage as a union between a man and a woman, the dignity of the human person made in the image and likeness of God with a God given identity, to the outreach to the poor, the needy, and the immigrant, the priest must have the courage to proclaim the truth but always in love with a father’s heart.

My brother priests I thank you for all you do in so many ways and for your having a father’s heart for the people that you serve, for each other as well as for me. As we now renew our priestly commitment, may St. Joseph be a special model and intercessor for all of us as we continue to face and take up new challenges in our ministry. They may sometimes seem impossible, but we face them always realizing that union with the Lord, especially in the Eucharist, is the core of our fatherhood and priestly heart.  My brother priests, I assure you of my support, love, and respect.

I conclude with a prayer, taken from a 19th century prayer book, that has been recited by Pope Francis for more than 40 years:

Glorious Patriarch St. Joseph, whose power makes the impossible possible, come to my aid in these times of anguish and difficulty.

Take under your protection the serious and troubling situations that I commend to you, that they may have a happy outcome.

My beloved father, all my trust is in you. Let it not be said that I invoked you in vain, and since you can do everything with Jesus and Mary, show me that your goodness is as great as your power. Amen.