Miami Archbishop Thomas Wenski and Father Alfredo I. Hernández, left, rector of St. Vincent de Paul Regional Seminary in Boynton Beach, pose with the recipient of the 2021 St. Vincent de Paul Award, Msgr. Jose Luis Hernando, a retired Archdiocese of Miami priest and one of the members of OCSHA, a group of priests recruited from their native Spain to serve as missionaries and evangelizers in priest-poor Latin America and parts of the U.S. 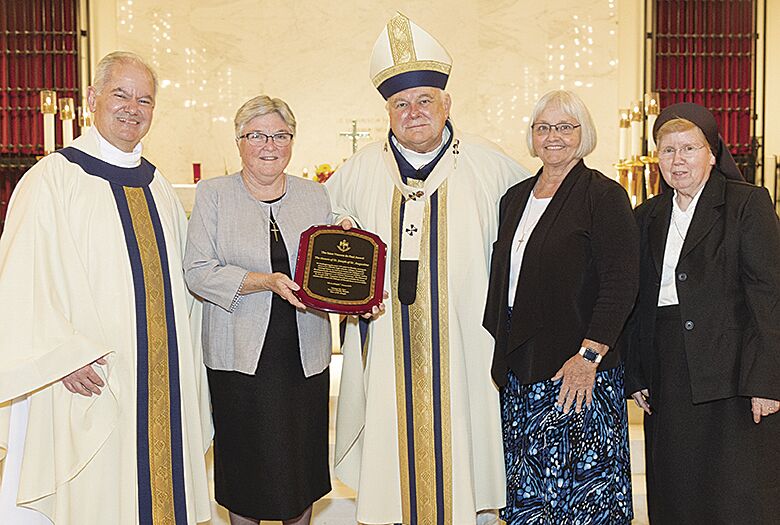 Miami Archbishop Thomas Wenski and Father Alfredo I. Hernández, left, rector of St. Vincent de Paul Regional Seminary in Boynton Beach, pose with the recipient of the 2021 St. Vincent de Paul Award, Msgr. Jose Luis Hernando, a retired Archdiocese of Miami priest and one of the members of OCSHA, a group of priests recruited from their native Spain to serve as missionaries and evangelizers in priest-poor Latin America and parts of the U.S.

Msgr. José Luis Hernando, whose last parochial assignment before retiring was as pastor of St. Agnes Church in Key Biscayne, received the award on behalf of the Obra de Cooperación Sacerdotal Hispanoamericana.

Founded in Spain in 1949, OCSHA recruited priests, which abounded then in Spain, to serve as missionaries in priest-poor dioceses throughout the Americas, including in Florida, where they served an ever-increasing Spanish-speaking population. OCSHA priests worked mainly helping poor migrant workers, catechizing, teaching English to the children and offering Masses in Spanish.

Msgr. Hernando was one of those priests, many of whom wound up working for the Archdiocese of Miami. He came to south Florida in 1964 and served at a number of south Florida parishes, from Homestead to Miami Lakes and Belle Glade (when it was part of the archdiocese). He also taught at St. John Vianney College Seminary in Miami, served as director of the Permanent Diaconate Office and Spanish-speaking Cursillo movement, and as president of Pax Catholic Communications (Radio Paz 830 AM/99.1 FM).

The other group honored for the “untold, immeasurable impact they have had on the Church in Florida” were the Sisters of St. Joseph of St. Augustine. Their story began in September 1866, when eight sisters arrived from France and settled in St. Johns County, near St. Augustine. The community’s historian wrote that they were “just ordinary women with a very great love of God, of the ‘dear neighbor’ and of the congregation. They were in their twenties, several newly professed, docile, and with a freedom to answer whatever they were called to do. Much like St. Joseph, their patron saint…listening, obedient and strong.”

Bishop Augustin Verot, then bishop of the Diocese of Savannah and vicar apostolic of Florida, had invited them here and asked them to educate and evangelize the freed slaves. The sisters learned English and began by first teaching the children of those freed slaves and, in night school, the adults. They supported themselves through the sales of handmade lace, private French lessons, music and art, and by boarding invalids. In 1874, they opened St. Joseph Academy and later similar academies in Jacksonville, Mandarin and other parts of the state. By the turn of the 20th century, the work the congregation and others had done throughout Florida enabled more than 50% of the African American population to be able to read.

Since that time, the community’s ministry expanded to various unique missions throughout the state, including elementary schools, high schools, colleges, hospitals, homes for children, nursing homes, homes for developmentally disabled adults and a home for unwed mothers.

Receiving the award on behalf of the Sisters of St. Joseph were Sister Kathleen Carr, general superior, and Sister Stephanie Flynn, canonical treasurer and councilor for congregation, both of whom served until recently as administrators of St. James and Holy Family Schools in north Miami; and Sister Elizabeth Worley, chancellor for administration in the Archdiocese of Miami.

A statement posted on St. Vincent de Paul Seminary’s website read: “We thank God for the missionary zeal of both groups we are honoring. Together they have labored for the good of the Church, helping thousands of people in countless ways, building up the faith in Florida.”