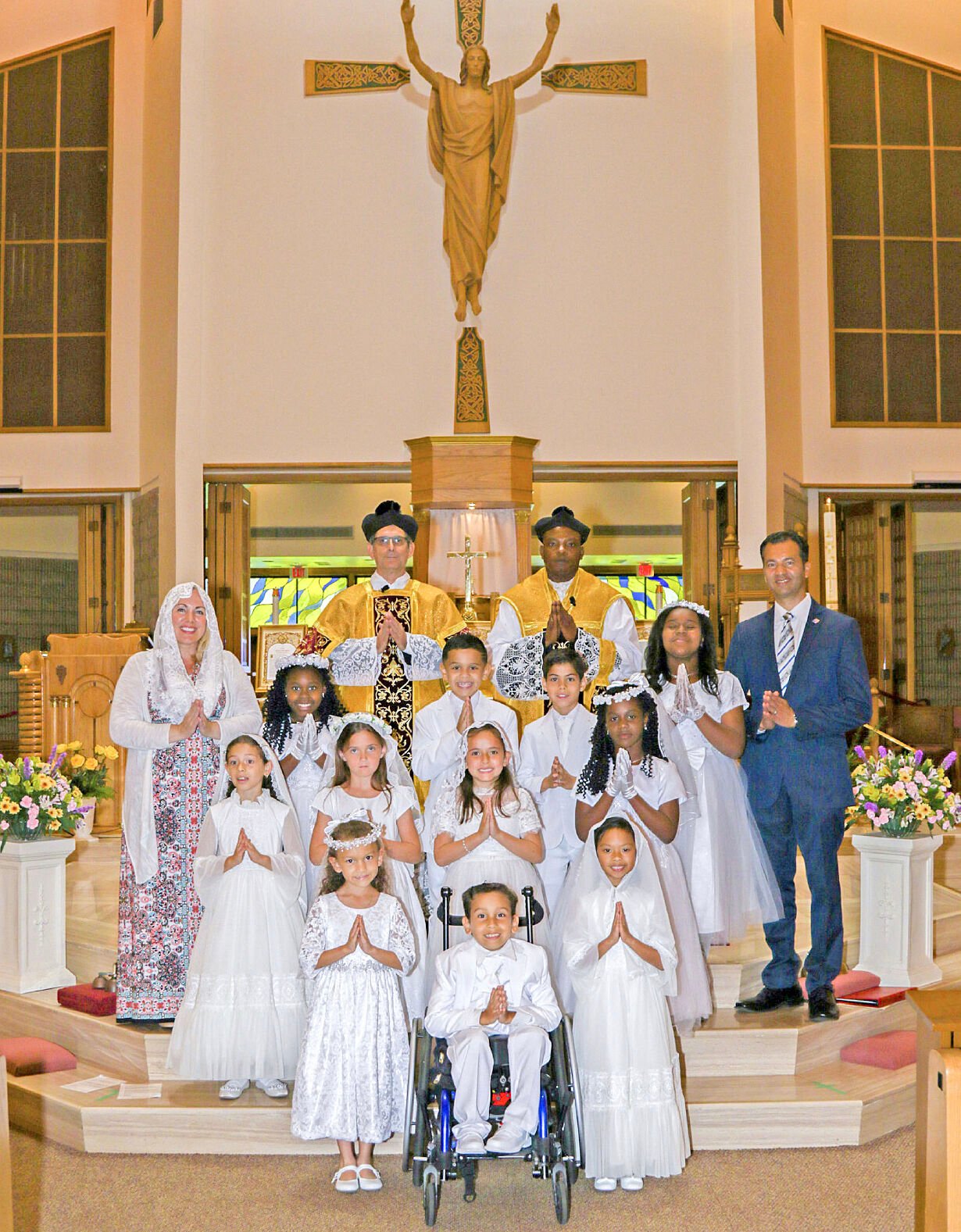 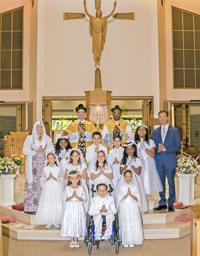 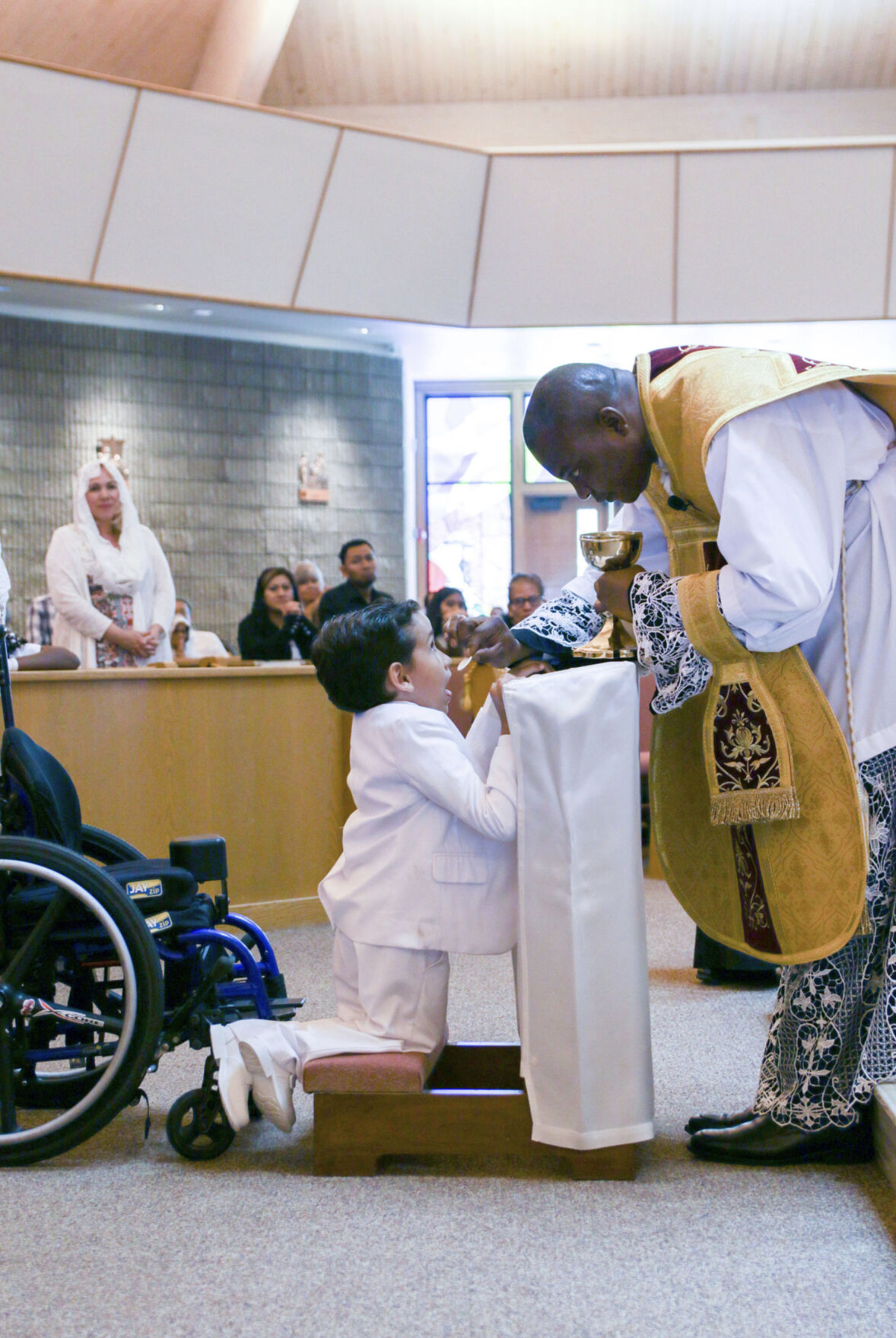 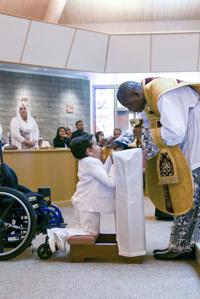 LANTANA  |  For Darren Matias, the Traditional Latin Mass offered at Holy Spirit Church in Lantana is “filling a pastoral need for a reverent connection to a style of worship that has been around for more than a thousand years.”

The music director of Holy Spirit Church stated, “Those who are seeking the beauty of the Latin Mass are finding it here and the congregation grows more each week.”

Carson Wilkie, the master of ceremonies for the Latin Mass, affirmed this fact by sharing that Mass attendance has grown from approximately 50 people a week to 250 over the last year.

“And this during pandemic times is a huge testament to the drawing power of the Extraordinary Form,” said Wilkie, who drives from Parkland to volunteer for one of the few Latin Masses offered in the Diocese of Palm Beach.

Similarly, Hernan Bermudez drives from Pompano Beach with his family to attend the Latin Mass.

“When I first stepped foot in the Latin Mass offered by Father Eli St. Fort, I experienced a solemnity so profound. I knew I was home. I felt called to make this a regular practice for me and my family,” he said.

Bermudez recently coordinated the faith formation of 11 first communicants in the Latin Rite at Holy Spirit Church, an indication that young families make up a considerable portion of the congregation for the Latin Mass.

Two of the students who made their First Holy communion in the Latin Rite, May 9, 2021 were two of Bermudez’s own children.

“In preparing these students for their first communion in the Latin Rite, I saw the light bulb go off for many of them as we drew connections to the fact that saints and popes from long ago celebrated Mass the same way they would be. It was a chance to go deeper into the Mass, learning the richness of the treasure that is our faith,” said Bermudez.

Some might find it surprising that young people gravitate towards this form of the Mass since the Latin text of the Mass is printed according to the 1962 Typical Edition of the Missale Romanum (Roman Missal). This is the Mass that was offered in every Catholic Church around the world until after Vatican Council II. According to the Latin-English Booklet Missal (Fourth Edition, 2013), Pope Benedict XVI explained there are two forms of the Roman Rite of the Mass. The Roman Missal of 1970 (after Vatican Council II), issued by Pope Paul VI, is the Ordinary Form. The Missal of 1962 codified by Pope St. Pius V is the Extraordinary Form. When the Missal of Pope Paul VI took effect in 1970, it was widely and falsely believed that the Traditional Latin Mass (the 1962 Missal) had been abrogated and suspended. Despite this erroneous belief, interest in the old Form of the Mass persisted.

Some Vatican leaders and religious scholars debate the Latin Mass’s relevancy to the modern world and its nostalgic claim of a bygone era of Catholicism. Sentiments surrounding the practice of the Latin Mass are that it negates the efforts of the Church to modernize its aesthetic appeal, liturgical structure and approach to engaging younger generations previously set forth at Vatican Council II.

Yet, Matias finds that the chanted structure of the Latin Mass draws a diverse age group: the Holy Spirit Church choir for the Latin Mass spans multiple generations.

“We have eight singers in the Latin Mass choir; one a college student and three others a daughter of eight years old, her young mother and her grandmother who has attended the Latin Mass since she herself was a young girl,” said Matias. “I think it’s a matter of intrigue for these young parishioners. The Latin language is fascinating and when chanted it’s like sight reading an endless melody of glory to God.”

He continued, “In the Catholic Church, we use the word mystical to describe many things. I think the Latin Mass has that sense of mysticism that brings people closer to God just through what your senses take in during the Extraordinary Form.”

A year ago, Holy Spirit Church offered a Low Mass where nothing was sung. Today, it welcomes a culturally diverse congregation to the misa cantata, or sung Mass, also known as a High Mass.

Matias explained that everything is stylized, from the Scripture chants to the hymns sung in Latin, and the “coloring of the music changes from season to season.”

“Choir rehearsal often turns into a liturgical study session because it’s important for the singers to know why the modes and harmonies change throughout the year. For example, during Lent the tones become darker and they grow lighter—brighter in sound—as we move towards Easter.”

A High Mass brings more responsibility for the master of ceremonies, who manages everything from the number of altar servers required to the bells used to the movements throughout the sanctuary. Wilke noted that although he leads the process of preparing for the Latin Mass, “it is a collaborative effort that requires rehearsal and participation from many moving parts.”

With so much having happened since the start of the COVID-19 pandemic, Matias, Wilkie and Bermudez all agree that participating in the Latin Mass has served as a rock of stability in a sea of uncertainty.

Bermudez said, “The Church has survived so much and the Latin Mass is a testament to the unchangeable truth of our faith.”

In the Diocese of Palm Beach, the Extraordinary Form of the Mass is celebrated at Holy Spirit Catholic Church on Sunday at 2 p.m. and St. John of the Cross Parish Sundays at 1 p.m. For those who have not attended a Latin Mass before, visit pblatinmass.com to learn about the structure and what to expect at a Latin Mass.

To learn more about Holy Spirit Church in Lantana, visit holyspiritlantana.com and follow the parish on Facebook @HolySpiritLantana.