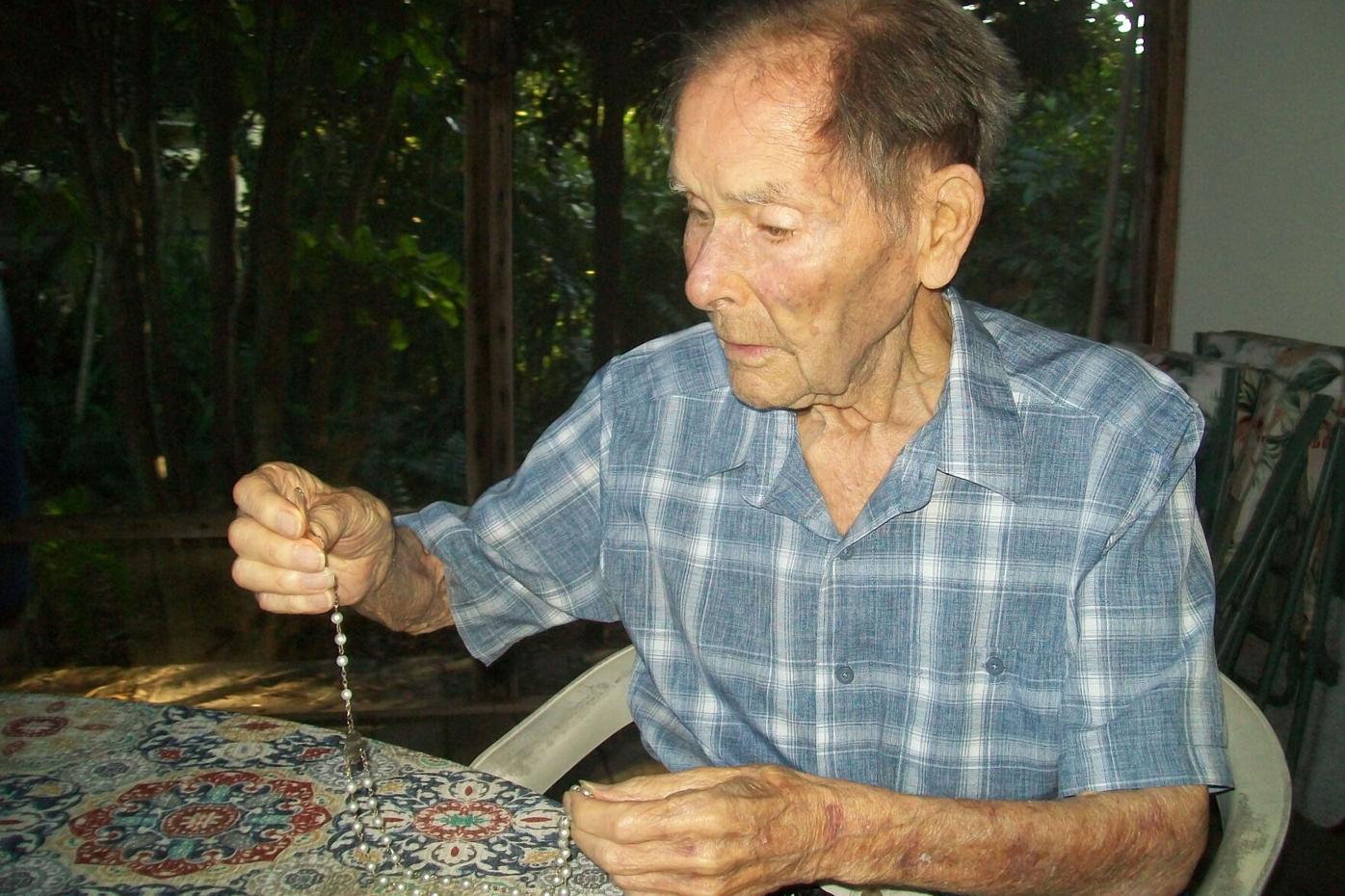 Nazi labor camp survivor, Dr. Johannes (John) Brolmann of Fort Pierce, shows a rosary he keeps in his pants pocket. His faith carried him through the dark days of WWII. 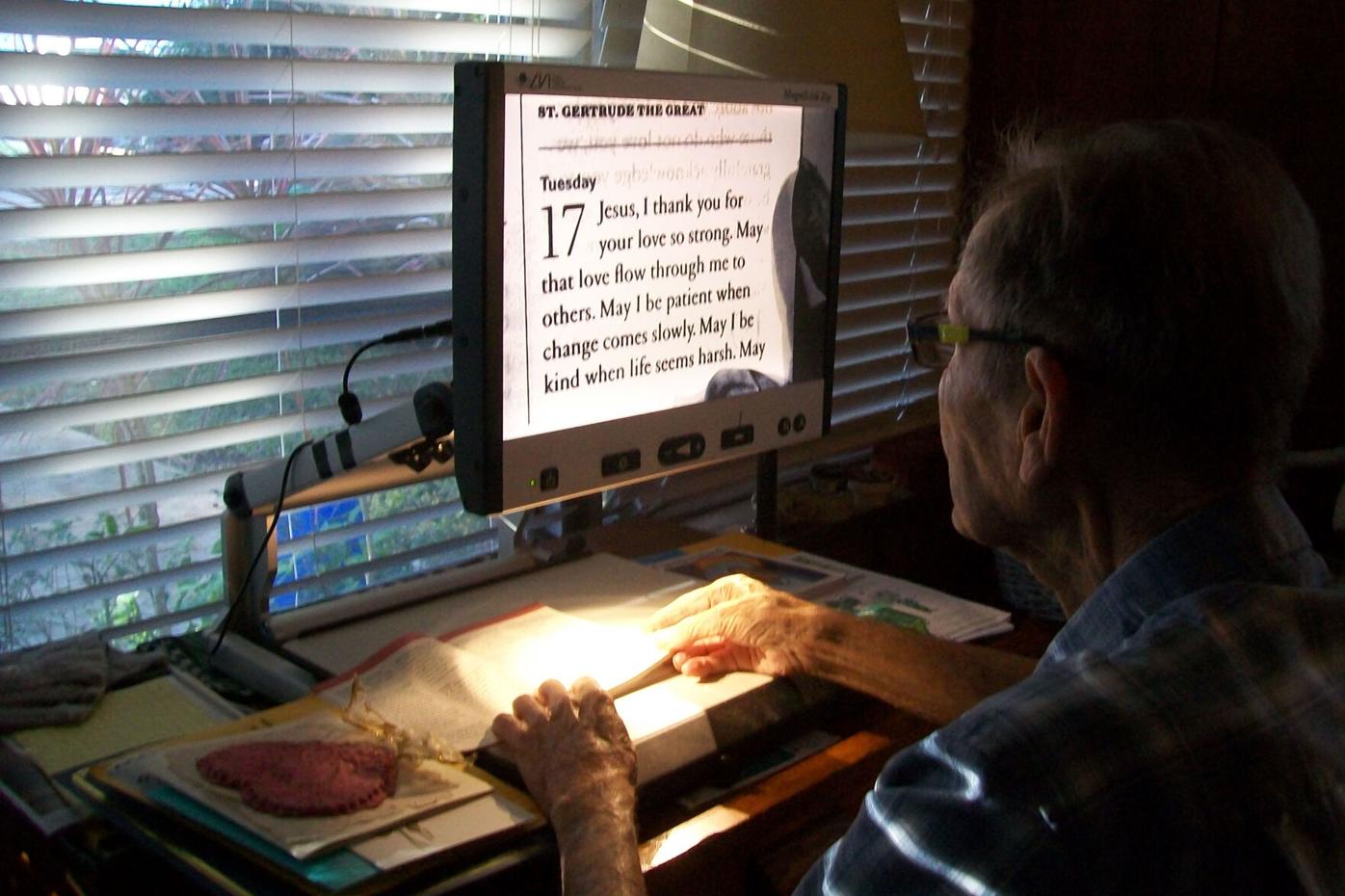 Dr. Brolmann reads his daily devotional with the use of a specialized magnifier. 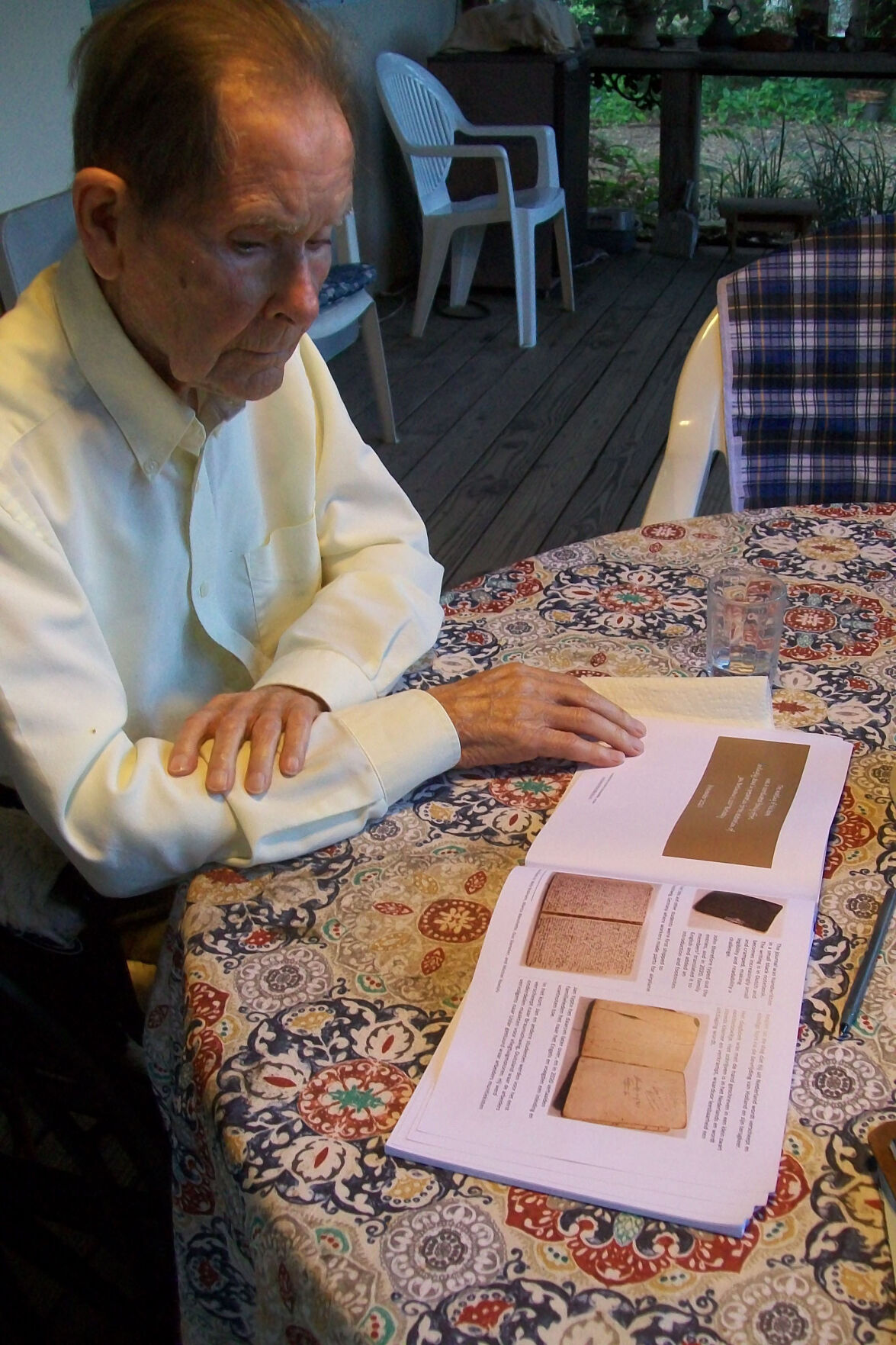 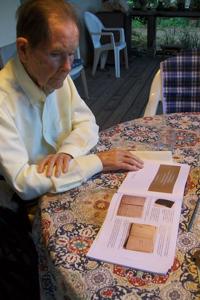 Dr. Brolmann received a published copy of his journal entries, translated from Dutch, which chronicled the events of his time working in Nazi labor camps during WWII.

Nazi labor camp survivor, Dr. Johannes (John) Brolmann of Fort Pierce, shows a rosary he keeps in his pants pocket. His faith carried him through the dark days of WWII.

Dr. Brolmann reads his daily devotional with the use of a specialized magnifier.

Dr. Brolmann received a published copy of his journal entries, translated from Dutch, which chronicled the events of his time working in Nazi labor camps during WWII.

The story of how Dr. Johannes Brolmann, a native of Holland, came to live in Fort Pierce is a long and varied tale that is nothing short of an incredible witness of faith.

A long-time parishioner of St. Mark the Evangelist Parish in Fort Pierce, Brolmann has spent the later part of his 100 years—which he celebrated Nov. 20, 2020—serving the Diocese of Palm Beach as a man dedicated to his Catholic faith. The Florida Catholic Media recently interviewed Brolmann to honor his 100 years of life and faith, which led him through World War II.

Brolmann was the fifth of 10 children (six girls and four boys) born in Hilversum, Holland, Nov. 20, 1920. His parents, Joseph and Mary Brolmann, were devout Catholics who raised their children among many Catholic influences. Extended family lived nearby, and some were members of religious orders and missionaries. Life in this large family meant chores, dedication to church teachings and actively living Catholic virtues. In a thick Dutch accent, Brolmann added that he was an altar boy at his parish and sang in the choir.

In high school, Brolmann worked for his father, a merchant who imported footwear from England. At age 19, he applied to the Wageningen University where he fostered a penchant for plant structure and microscopes.

“I was always interested in plants. I have drawers full of seeds,” he said.

As World War II loomed and the Nazi occupation of the Netherlands became a reality, Brolmann’s faith was tested daily. Adolf Hitler’s persecution of Catholics was a major cause for alarm for the people of Holland, whose history of Catholic persecution harkens back to the days of the Reformation. In his famous painting, Allegory of the Catholic Faith, Johannes Vermeer alluded to Catholic anguish and secrecy during the Protestant Dutch Republic when public celebration of the Mass was illegal. Catholics were so vilified, that it is estimated over 90% of religious art was destroyed in Holland in the 1500s.

Despite declared neutrality, the country was placed under German control. Major cities like Rotterdam were aerial bombarded by the Luftwaffe in May of 1940.

“We listened to speeches on the radio given by Hitler,” said Brolmann. “My father knew it wasn’t good.”

Brolmann explained that in 1943, Arthur Seyss-Inquart, who reported directly to Hitler, was appointed Reich commissioner of the occupied Netherlands. He promulgated a reign of terror, subjecting Dutch civilians to forced labor. He introduced measures to combat resistance from the Dutch, and when there was a widespread strike in Amsterdam, Arnhem and Hilversum in May 1943, special court-martial procedures were imposed.

One such measure stated that young men could remain at the university if they signed a compact with the Nazis to support their ideals and efforts.

“There was no way I could sign it,” Brolmann explained. “We just couldn’t do it. Hardly anyone went along with the Nazis.”

So, began two years of near-starvation and deplorable health conditions in unregulated factory jobs for Brolmann.

At the orders of German officials, Brolmann’s family brought him to the railroad station in May 1942.  Brolmann recalled that his father started to cry when he left him because of news about the implementation of gas chambers. The young man was sent on railcars to Braunschweig, Germany where production lines produced metal boxes to store guns. It was monotonous work, stamping dates and installing handles.

When supplies ran out or labor was needed elsewhere, Brolmann was sent on to a new factory location. His next station was Uslar, Germany, where ammunition boxes were assembled. Here, the labor teams attempted to sabotage the production by slowing down work. While there, Brolmann saw people being taken to concentration camps. They wore a tag on their jackets.

“We didn’t know they were going to be killed. What could you do? Nobody told us. We saw them going away with police,” he added.

Throughout all of these trials, faith was always a priority for Brolmann.

“We didn’t ignore our religion,” he said. “If there was a church, we would go on Sunday. I could recite the Mass in Latin because of being an altar boy, so I recited special prayers at Easter and by myself every day. I could also say it in French. We students prayed together.”

Early on in the war, labor camps had some liberties where workers received payment in a currency that could only be spent locally or to make purchases on site.

“We received packages from home. I had a pen and a few small journals,” he said. They are among the keepsakes that chronicled daily life, writing ever so small as to condense space so the pages would not run out, and a photo ID that was used at one of the work camps.

He kept a journal from May 1942 to 1944, the year when he was eventually sent home. At one point he wrote that he carried a heavy suitcase from the train station through woods to a settlement at the first labor camp. A common sentiment rang among the journal entries: “We will return home.”

Another assignment brought Brolmann to a factory assembling airplane motors. This was the most trying, he said, because it was a dirty factory – thick with toxic air from cooling hot metals in oil.

“The air was awful with smoke. Some days we worked 12 hours with no days off. We worked on big engines; it smelled terrible,” he said.

The last location he worked at was a bomb factory in Holland at Herzberg am Harz. Toxins permeated the air and the work was dangerous.

“Our lips and hair turned blue,” he stated. A new factory roof was needed, so gravel, coated in hot tar and placed in heavily laden buckets, was hauled up three stories on ladders. “Hot tar would spill and burn the workers below,” he said.

While there, the Allied Powers bombed the factory at night, causing their quarters to collapse. Amid the chaos, some workers ran into the woods which were on fire. Brolmann remembers being sent to clean up bodies in the rubble. The attack was the beginning of the end of the war.

After a grueling journey home at war’s end, Brolmann returned to Hilversum. There he continued his degree in botany. In 1952, he met his wife, Antoinette who lived nearby. They were married in the same church of their baptisms and confirmations, St. Vitus Catholic Church. With a doctoral degree and a command of the French language, John and “Nettie” settled in Arles, France, where three of their four sons were born. Brolmann finally had the chance to do the work he loved – breeding plants in the very wheat fields once captured by Vincent van Gogh on canvas.

In the 1960s, the family immigrated to the United States, and Brolmann spent days at the local library researching major corporations that might need his expertise in the field of plant propagation. He soon discovered that his Ph.D. was not applicable in the United States and he needed to begin anew. He enrolled at the University of Florida in Gainesville and worked in the Agronomy Department while earning a doctorate in botany. The couple welcomed a fourth son here.

A new project established in 1968 at the Fort Pierce Agricultural Research and Education Center gave Brolmann the opportunity to flourish in his botany career. The project was to expand the growth of citrus to Florida’s interior land, which was a challenge due to the state’s sandy soil. Brolmann took the job and he and his family moved to Fort Pierce, where they attended St. Anastasia Parish and School.

As a university employee, Brolmann traveled to places like Australia and countries in Central America with similar soil, conducting field research and discovering new plants. He focused on many types of native legumes, promoting high-yield seeds for use in cattle feed. He received special recognition for developing Savanna Stylo as a nutritional stockpile. After officially retiring in 2000, Brolmann continued to work part time for the university.

Brolmann and his wife Antoinette, who passed away in 2017, were vibrant members of the diocese’s northern deanery community, volunteering extensively. They supported the Haitian ministry at Notre Dame Catholic Mission in Fort Pierce, donating a set of the Stations of the Cross for the mission in the mid-1990s.

The Brolmanns would often donate fruit to the mission, help with the homeless and assist in whatever the couple could do for the mission financially. Brolmann’s son Wally shared that his father would drive to Delaware Avenue in Fort Pierce to pray the rosary at the abortion clinic there every week.

Today, Brolmann spends his days reading a daily devotional and watching the buntings and hummingbirds visiting the feeders near his back patio. His sons take turns spending quality time with him, enjoying the lush, tropical landscape in the backyard. The centenarian diligently attends St. Mark the Evangelist Parish where he continues to be a vital member of the faith community. For his centennial birthday celebration, Brolmann was treated royally by his family and received phone calls from local dignitaries along with a special letter and certificate from Bishop Gerald M. Barbarito of the Diocese of Palm Beach.

The letter read, “As your faith sustained you through horrific events, your presence here in our diocese at St. Mark’s has sustained many because of your dedication and example of Christian living.”

Despite his difficult past, Brolmann maintains a sunny and welcoming disposition to all who enter his home, “May peace be upon you and upon the world.”