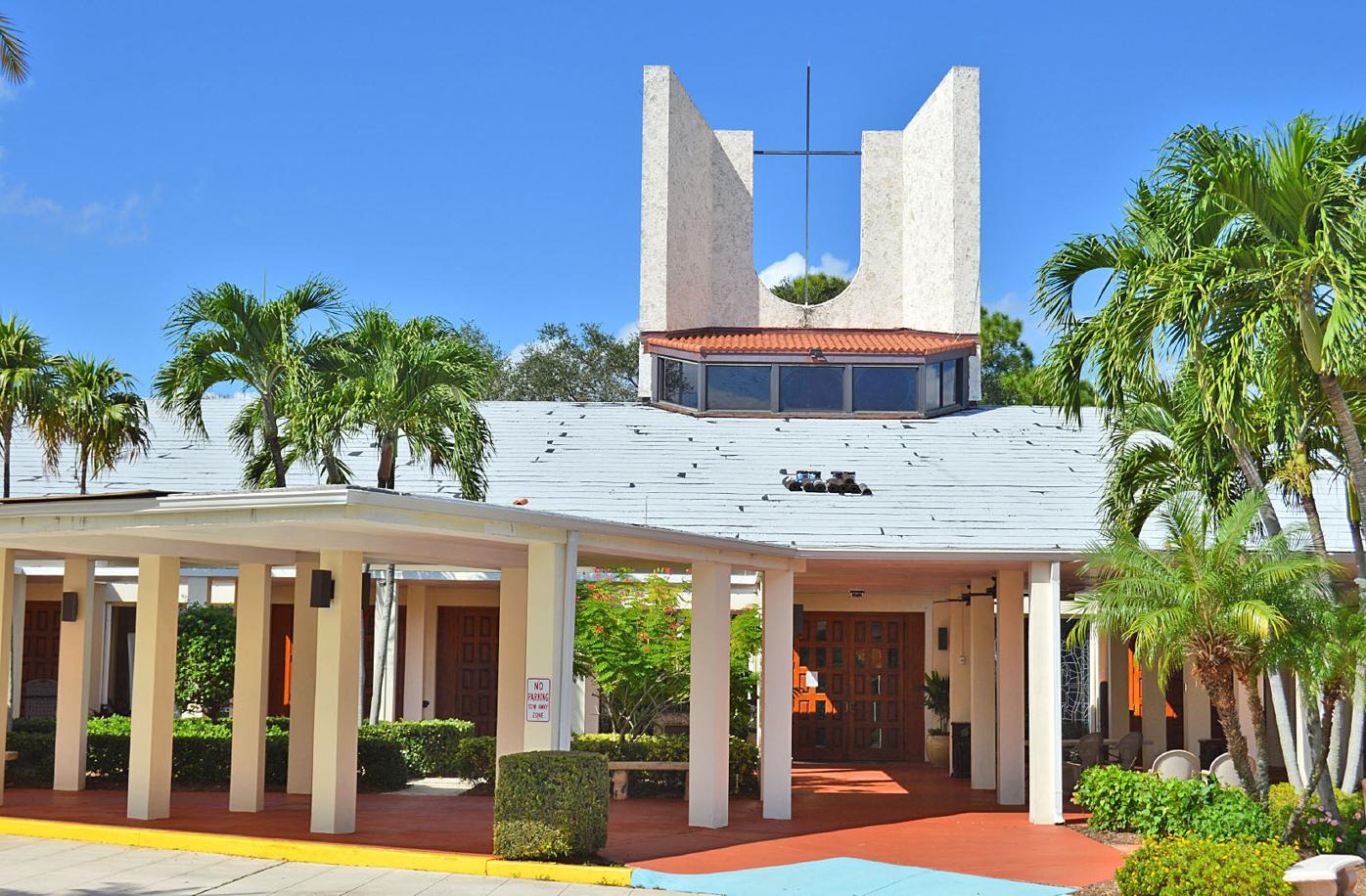 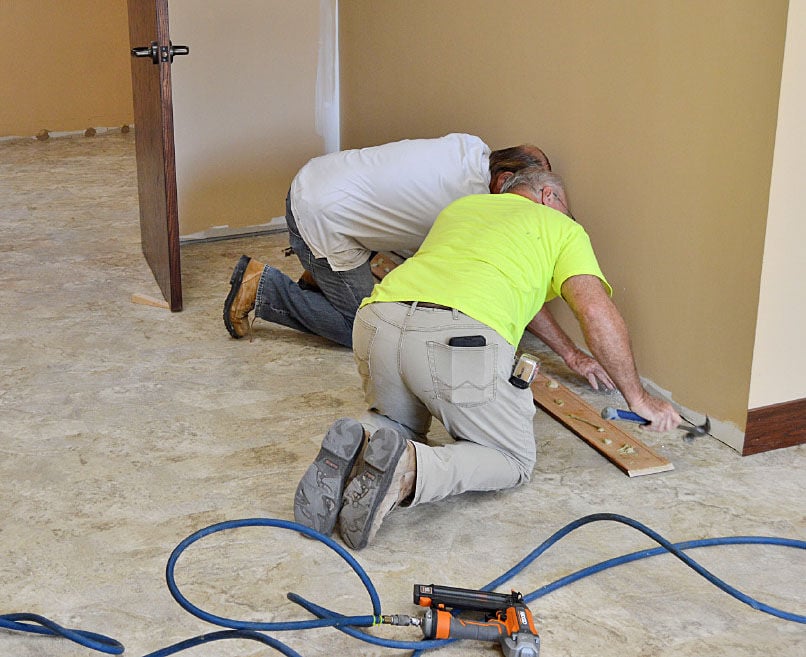 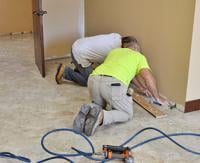 Workers add moulding Oct. 20 after a new floor was installed in the sacristies at the Cathedral of St. Ignatius Loyola in Palm Beach Gardens. The bulk of the renovation project is due to be completed by the end of October.

PALM BEACH GARDENS  |  Over the last five months, the Cathedral of St. Ignatius Loyola has looked a bit like a construction zone, with jackhammers going full blast, construction workers walking in and out, and portable toilets in the outdoor patio.

Well, that’s about to change.

Major renovations on the cathedral, at 9999 N. Military Trail, were begun in June and July to repair and improve some areas of the building that needed attention.

Father Gavin Badway, cathedral rector, said the 37-year-old cathedral that needed work because of age and heavy usage that were also affected by environmental factors like sunlight and heat.

• A new roof, to stop leaks that have gotten more prevalent through the years, said Father Badway, who has been the rector for nearly 16 months.

• Refinish the original pews, removing the fabric seats, which had endured many tears and stains. The large stained-glass window on the east side of the building let in so much heat and light that the carpeting, kneelers and upholstered pews had faded, and the seat fabric became brittle and torn.

The cost to clean the fabric was about $5,000 each year, Father Badway said, and reupholstering the seats costs $70,000. But new solid-wood pews would cost $140,000, so the choice was clear: “It’s not worth it to spend that money foolishly to reupholster them, especially since it would have to be redone every so many years, and the new pews have seats made of solid wood, which won’t break over time like the upholstered ones do,” he said.

• Replace the Spanish tiles in the narthex, or entrance area, to the cathedral.

Father Badway said the wood on the sanctuary wall (“reredos” in church lingo) was added in 2007, but the upholstered pews were left as is, along with pink carpeting and tile at the entrances. He said those older items didn’t quite match the new look.

“The narthex wasn’t good because Spanish tile is beautiful when it’s in a nice, old house or building. But when the whole church is new and looks kind of more Italian-like, and then you have that one old floor in the back, it looks out of place,” he said.

“Plus, it was noisy. People with walkers couldn’t even walk on the floor. They kept having to pick up their walkers because it was so uneven. So, we had that whole floor redone just a couple of weeks ago.”

The new floor looks like marble that matches the sanctuary, Father Badway said. “It’s totally flat so people can walk with their walkers unhindered.”

New flooring was put in under the pews that will be easy to clean, he said. Some carpeting was installed in pieces, 2 feet by 1 foot, so that small sections can be replaced when stains occur.

• Install a new sound system. The speakers are smaller than the old ones, with a better directional range of sound, Father Badway said. “But because the cathedral now has wooden pews, they don’t absorb all that sound, so it echoes more like a cathedral.”

The new sound system allows hearing-impaired people to plug in with Bluetooth to their hearing aids or cellphones using earbuds.

“We fixed the echo a lot, but for that little reverb that’s still there for some people who have a problem hearing, they can listen with the new sound system,” he said.

The old speakers that were hanging from the ceiling were removed, and new light-colored material was added to blend in with the ceiling on the alcove that hides speakers high above the congregation.

The organ pit was filled in because it had a flooding problem, which is why the organ was moved out, Father Badway said. Three new pews were added in its place.

Previously, there were wires throughout the music section, he said. “We constructed a wall on that side. All the wires now go in the wall, so they’re all hidden, looks nice and clean. The drums and the keyboard are behind that wall, as well as the microphones that pop up and down.”

Wood that matched the reredos was added to the music section wall and the ambry, which holds the sacred oils, Father Badway said.

• New fixed-placement video cameras were purchased. When he became the rector, they were streaming the Mass using a small camera on a tripod, he said. They now have cameras above the seating area and on the east side near the statue of Mary. “So, when we stream Mass, as well as funerals and weddings, which are just as important, we get a back view and a side view.”

The cry room now has an area for a video production person to direct online streaming and switch the slides that are projected on the walls during Mass.

• New statue of St. Ignatius Loyola. Statues of Mary, Jesus and Joseph were moved to the sanctuary, freeing up space for a new marble likeness of St. Ignatius, which should be installed in January, Father Badway said.

“St. Ignatius Loyola will be prominent where he belongs in the cathedral for us to see,” he said. “And we did it in the marble to match the statue of Mary because she is the patroness of our diocese and he’s the patron of the cathedral.”

• New restrooms and sacristies. Father Badway said the men’s room was too small and not handicap-accessible. Using space from other areas, the men’s and women’s restrooms are now larger and accessible for those with disabilities. They took an usher’s closet and made it into a separate family restroom, he said. And they added another restroom in case it’s needed that’s close to the sacristy.

“Cabinets in the main sacristy, which were water damaged because they were made with cheap materials, are being replaced,” Father Badway said. There were a lot of issues with old hardware in the room, and the carpeting was replaced with the same flooring used in the narthex.

“It’s a full sacristy that is now functional, as well as the regular sacristy, which is more functional now as well,” Father Badway said.

“So those are the four projects: the sacristies, the bathrooms, the roof and the main worship space in the cathedral. It will all be finished by the end of October,” he said.

The only parts of the renovation that remain are the installation of a new stained-glass window and getting the cathedral chapel back in working order. It will be painted, get new flooring and part of the ceiling will be touched up, he said.

The chapel project should take up to four weeks to finish, before Advent begins, Father Badway said. The chapel area has been used for storage, as a workspace and an entrance/exit for the construction workers.

A new stained-glass window depicted the Good Shepherd is being created to replace the one on the eastern wall that has deteriorated through the years, he said. The window will match the style of the windows in the narthex that portray the apostles.

“That’s going to be finished either Easter Sunday or, if it’s not – they said they may need up to two weeks more – which will be Good Shepherd Sunday, and the window is the Good Shepherd. Either way, I’m fine,” Father Badway said.

The budgeted price tag for the renovations was a little less than $1 million, but cost increases have pushed the project $200,000 over-budget, he said. But their timeline is on schedule.

It’s not too late to contribute to the project, if someone is so inclined, Father Badway said. They can call the parish office at 561-622-2565 and mail in a check.

He is hoping the renovations help to beautify God’s house and give the faithful a reason to have pride in the mother church of their diocese. But there’s more to it than aesthetic changes.

“My first priority was to take care of the physical plant,” Father Badway said. “Now the second part is even more important, and that’s to take care of the internal part of this church. We’re looking to develop new ministries and programs, giving opportunities for parishioners to plug in and live out the Gospel.”

To learn more about the Cathedral of St. Ignatius of Loyola, visit https://www.cathedralpb.com/, and follow the parish on Facebook and Instagram. For a full listing of parishes in the Diocese of Palm Beach, visit https://www.diocesepb.org/parishes/.