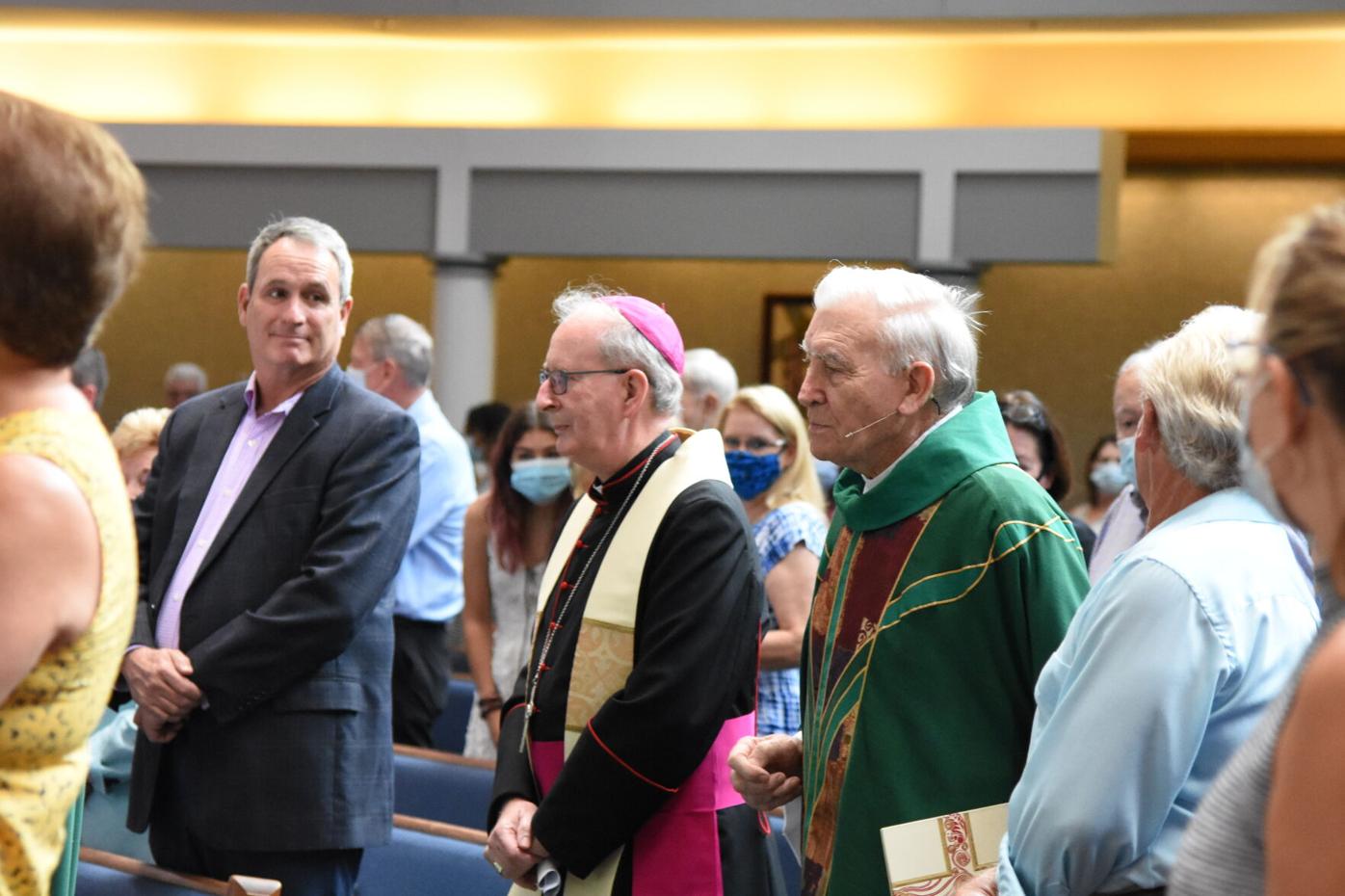 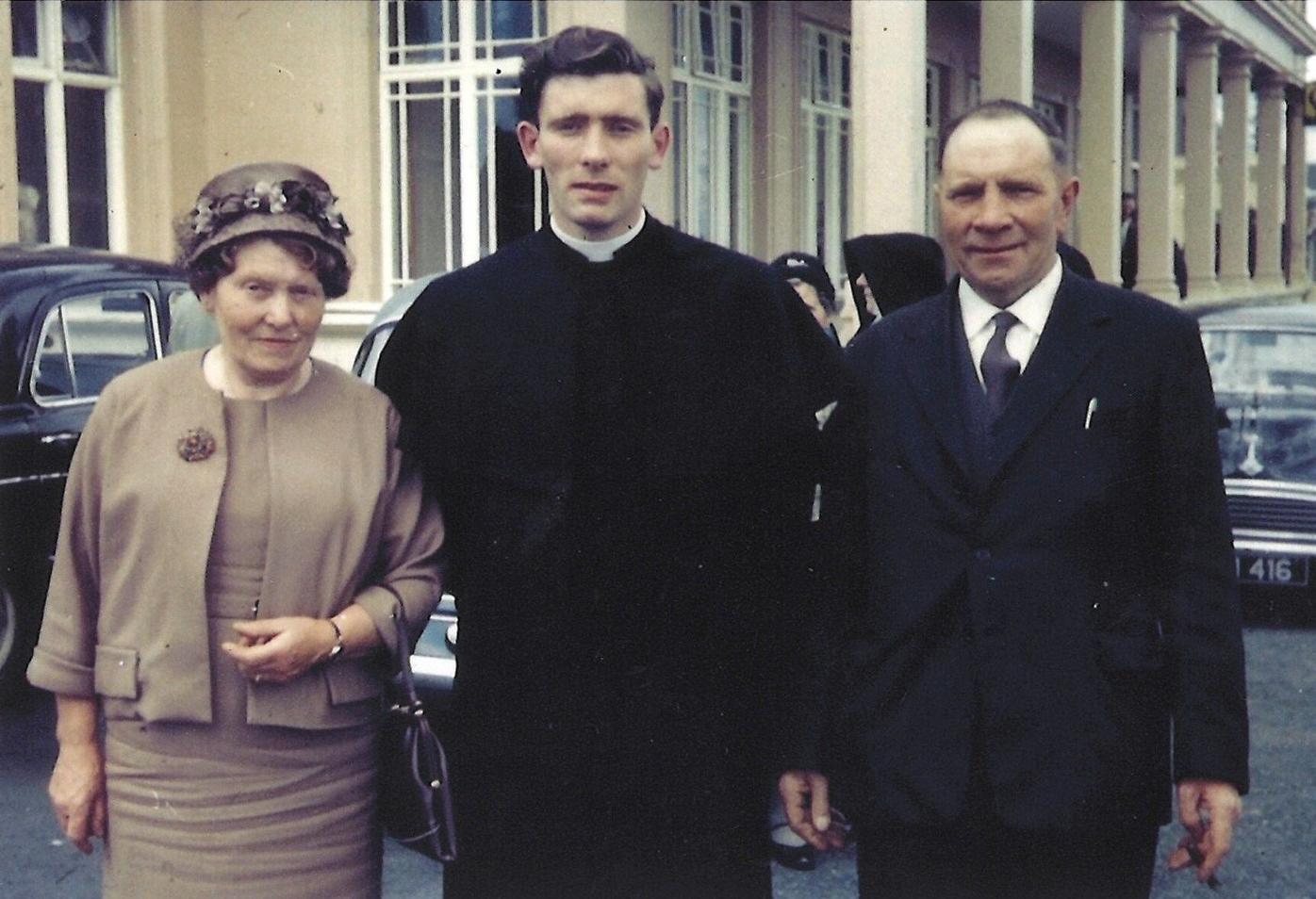 Monsignor John Bluett, June 13, 1963 on the day of his Ordination to the Priesthood, with his parents in Ireland. 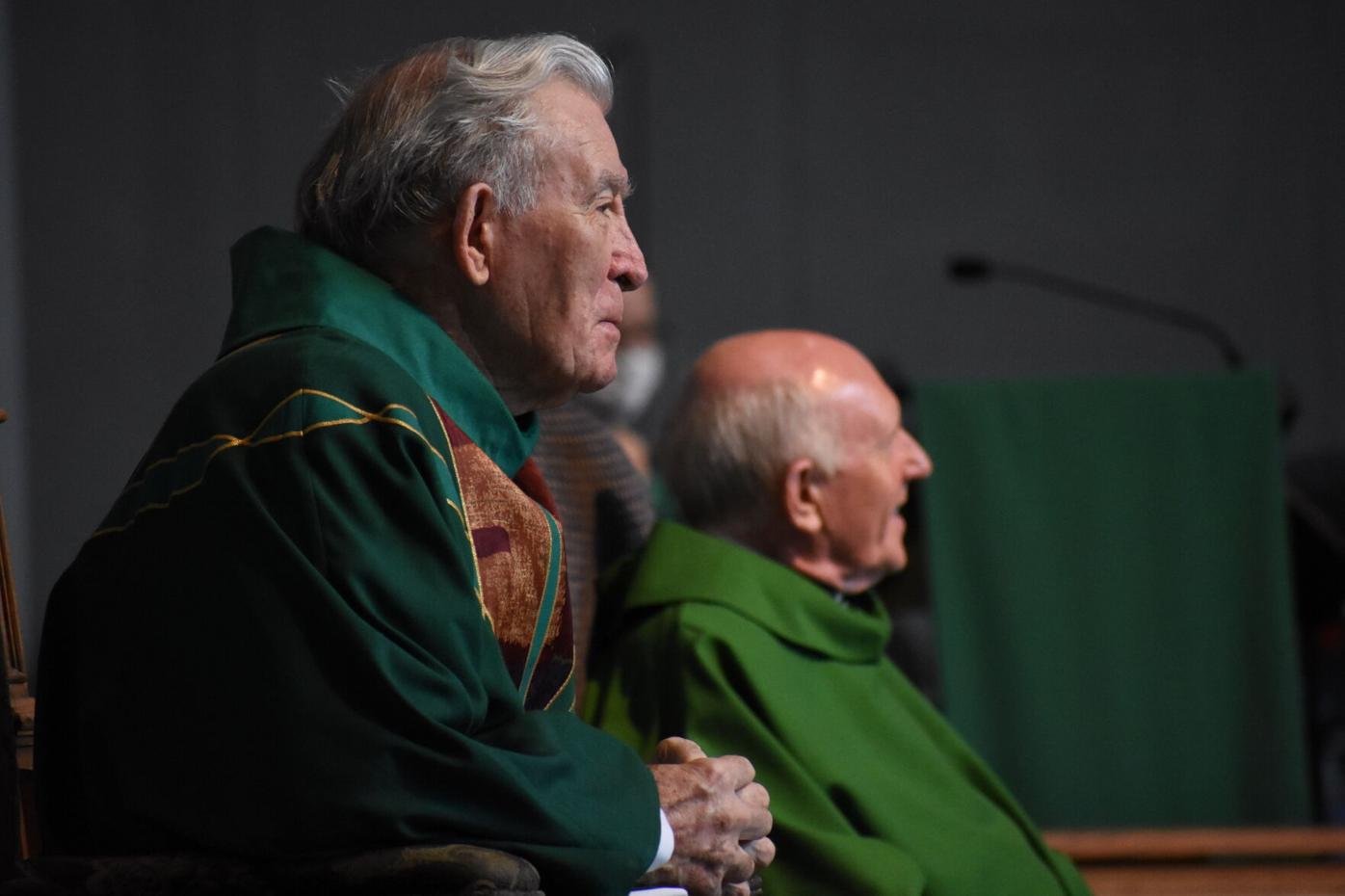 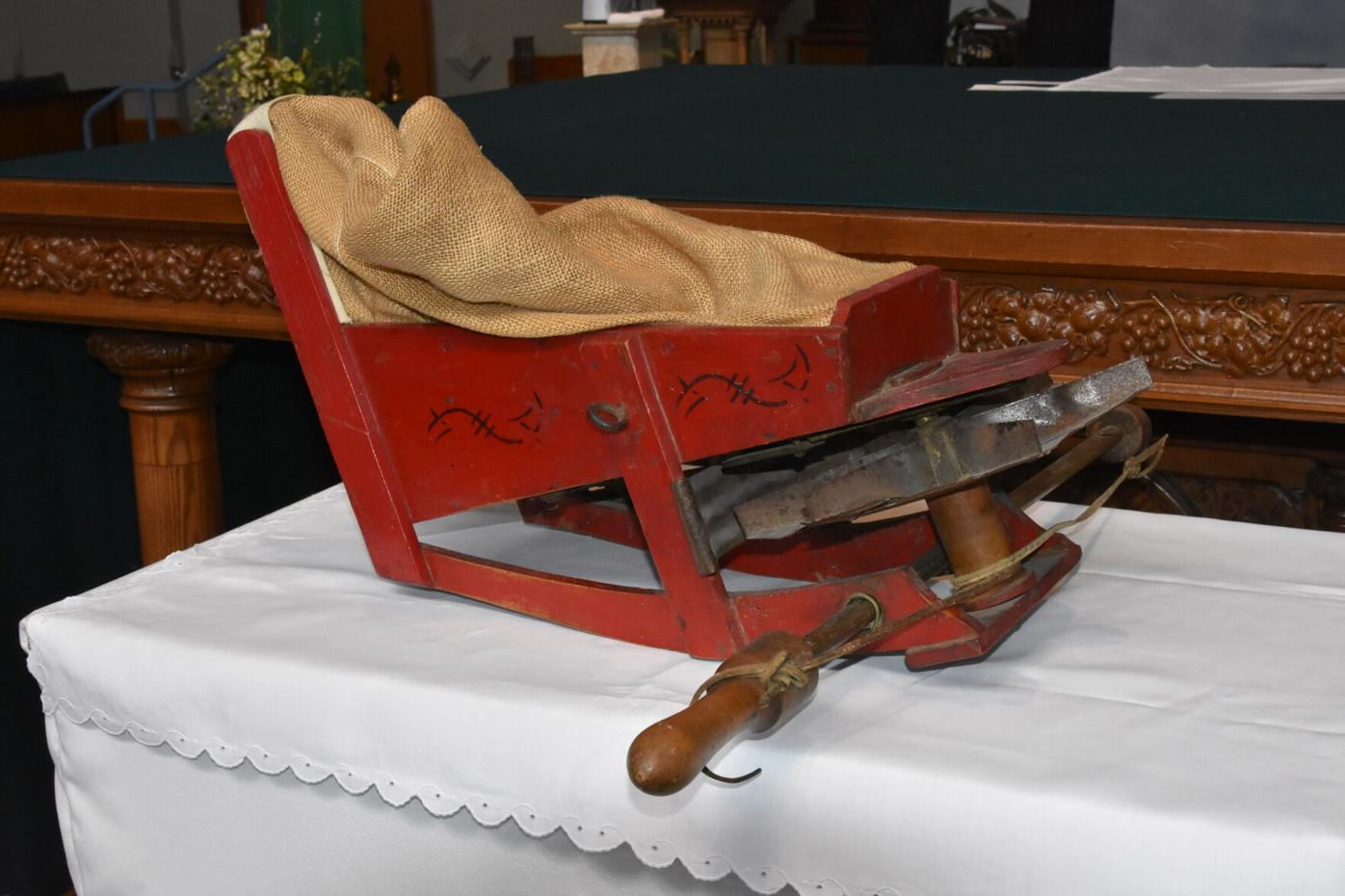 As a family of farmers, Msgr. Bluett used this seed sower to harvest barley in Ireland. The image depicts the knowledge he gained working on the farm, scattering seeds and trusting God to provide the water needed. "I had faith that in time God would provide a life giving crop, and he always did," he said. “This is pretty much the story of my life, but in this story I never did anything alone. All of you (parishioners) are the family that produces the life-giving crop that brings hope to the world.” He credited his parishioners for “the amazing harvest” that “changed countless lives.

Church pews at St. Stephen’s filled with parishioners and friends, and many who traveled from afar to honor the pastor on his final Sunday serving his parish. Screens on either side of the sanctuary told the story of his priesthood from his formation in Ireland to evangelization in the United States. People from across the globe joined via livestream.

“The service begins when you leave the building,” was the familiar refrain for the better part of six decades of Msgr. Bluett’s work in the Diocese of Orlando. The phrase represented his heart for outreach and how he teaches everyone he meets to be Christ to their neighbor.

The first to arrive more than an hour early were three friends who met at the parish. Marie Coln recalled joining the community when it was in transition, holding services in Lake Howell High School’s gym. She had been away from the Church for some time. He told her, “You’re coming back. God forgives you and He loves you.” He encouraged her involvement teaching and when Parochial Vicar and Blessed Sacrament priest, Father George Dunne arrived, she served with his LITE (Life in the Eucharist) program.

On Jennifer Aldana’s first visit, Monsignor introduced himself and welcomed her. “Everyone becomes a family here,” she said. He knew almost every parishioner by name, often having visited them at home.

Nancy Pfaff became emotional as she spoke. Now living 45 minutes away, she still makes the commute because, “This is a family. He’s made it that way.” Originally a St. Margaret Mary parishioner, she followed him to St. Stephen. “He’s an incredible man with a heart of gold. He does what we were all taught – to give to one another, help one another, to serve one another. He’s taught all of us that by example. He is going to be missed.”

Sent to Florida in 1963, to what was then the Diocese of St. Augustine, Msgr. Bluett first served at St. Charles Borromeo Parish which would become the cathedral for the new Diocese of Orlando in 1968.

He went on to serve seven bishops and several parishes. When the Diocese of Orlando was established, he served as vice chancellor and later chancellor, then led the Office of Family Life for several years. He served as pastor of St. Margaret Mary Parish in Winter Park. While there, he encouraged parishioners, including former Orange County Mayor Mel Martinez, to open their homes to 10 Vietnamese families seeking asylum.

Seeing the need to grow God’s kingdom in Winter Springs, Msgr. Bluett petitioned to open a church and established St. Stephen Catholic Community in 1987. He says the community is his greatest accomplishment. He is proud of, “The quality of people that have made this an outstanding community.”  Parishioners reminisced about the early days when Mass was held in a trailer with five rows on each side. The parish has since grown with a large parish life center, gym, and faith formation classrooms. Many parishioners also volunteer at Pathways to Care, an assisted living facility under the management of Catholic Charities of Central Florida. It is a rehabilitation facility for people recovering from surgery who are homeless.

One of eight siblings, five of whom became priests, he looked back at the 58 years, and said he lived them, “Just like life, one day at a time. You don’t know what’s next, but you’re happy to give it your best to build up the community.”

Msgr. Bluett will continue to help serve liturgies, visit his homeland of Ireland for several weeks, and of course, continue playing golf and tennis.

Blessed Sacrament Father George Dunne, the parish’s parochial vicar who retired the same day, plans to continue working with the LITE program, a laity-based program which teaches about the Eucharist. He hopes to become involved in the United States Conference of Catholic Bishops’ Eucharistic Revival wherever he can.

Bishop John Noonan honored both men during the Mass. He said Father Dunne reminded him of a flowering tree, like the jacaranda that brings peace. He imagines Msgr. Bluett more like an oak or a palm that bends through hurricanes; thrives and stays alive bringing life to others. He joked that Msgr. Bluett was not, as legend would have it, the first priest here as that would be the priests who arrived with the Spanish Armada in 1597. That said, he added, “All of you have a little bit of the seeds planted by Father John… They are there for you to let them grow in your heart, to know what it is to know and love the Lord.”