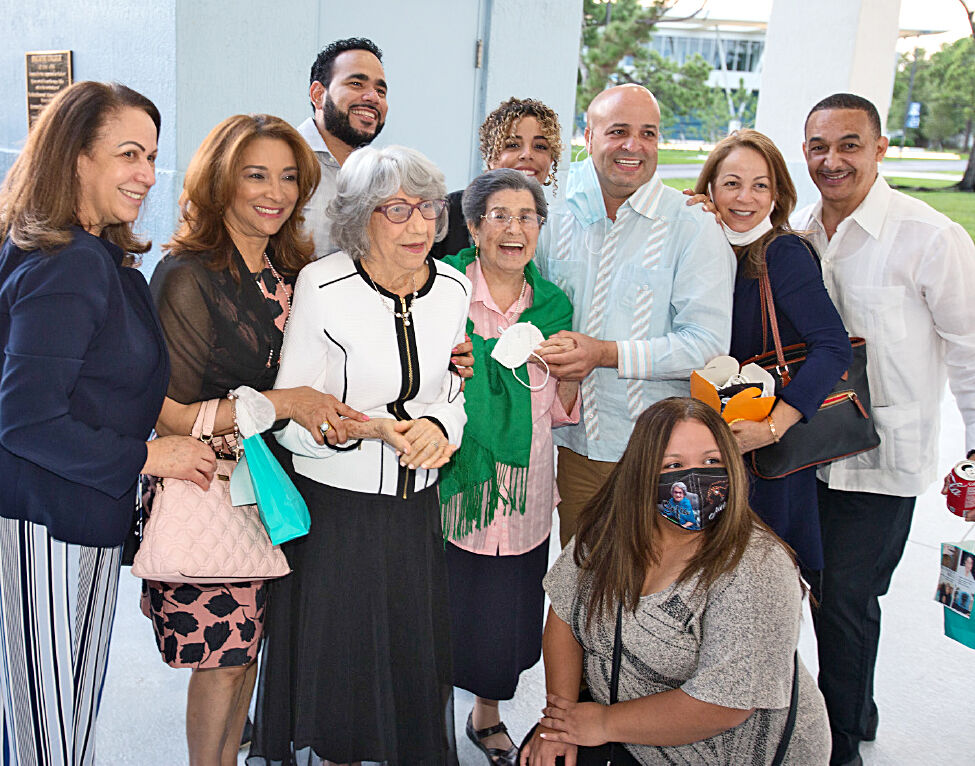 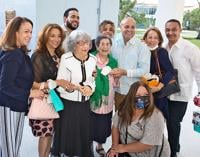 Sofia Ruiz and Reina Marmolejos, center, pose for a photo with a few members of their family after the Mass marking the first World Day for Grandparents and the Elderly, July 25, 2021. Miami Auxiliary Bishop Enrique Delgado celebrated the Mass at St.Thomas University's St. Anthony Chapel. (MARLENE QUARONI | FC) 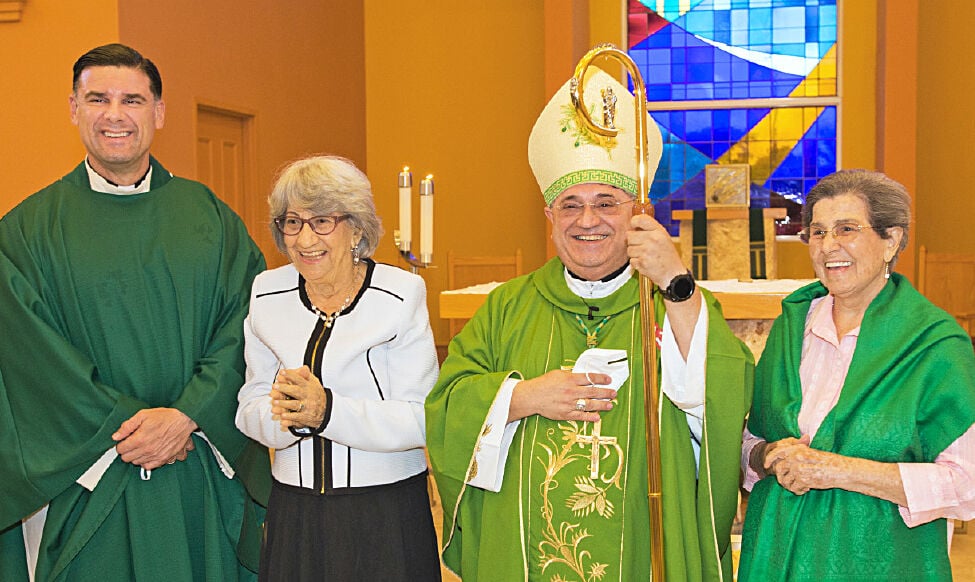 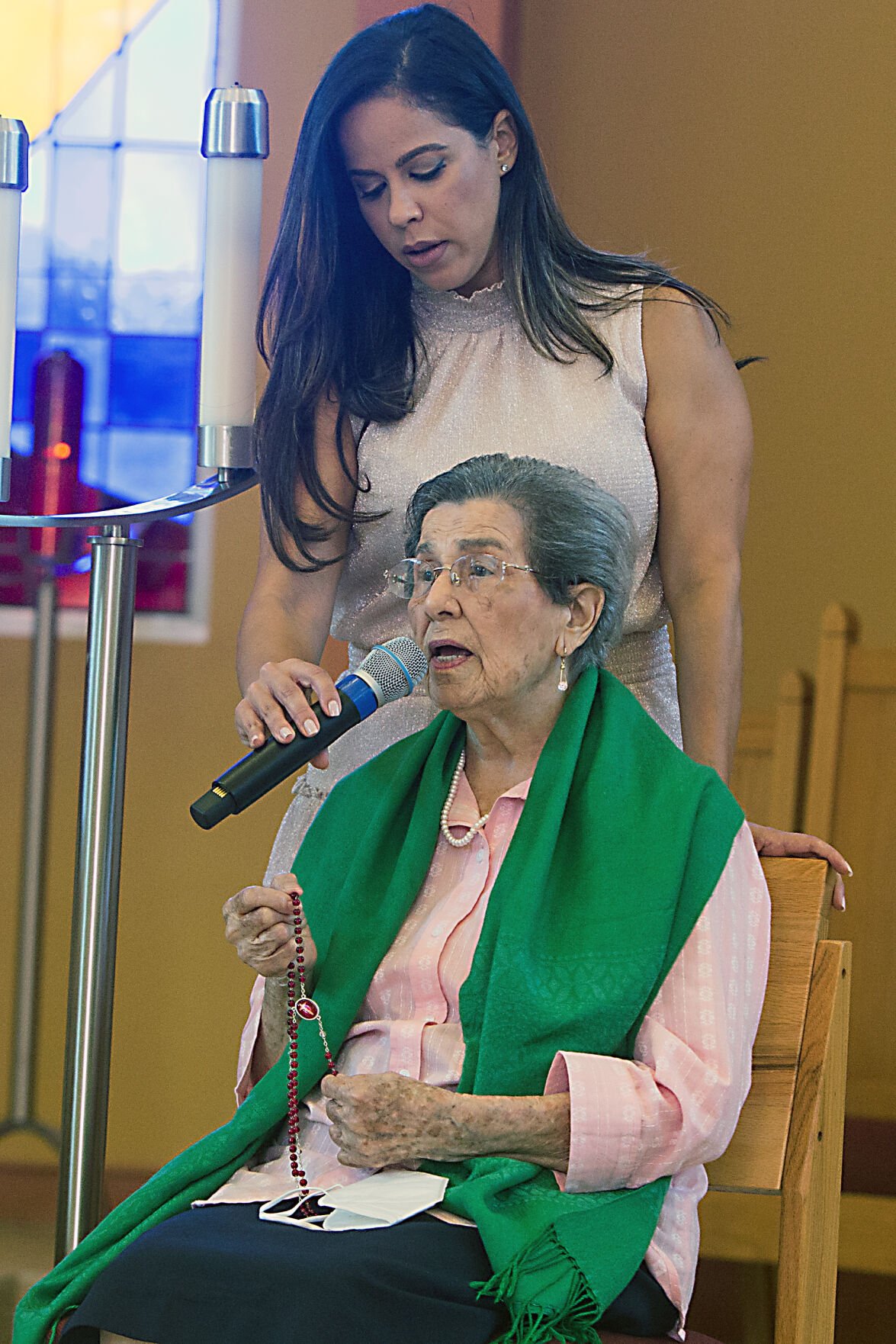 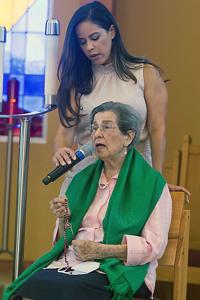 JULY 25, 2021 MARLENE QUARONI | FC Silvana Marmolejos holds the microphone for her grandmother, Reina Marmolejos, 95, as she recites the rosary prior to the Mass for the World Day for Grandparents and the Elderly at St. Thomas University, July 25, 2021. Miami Auxiliary Bishop Enrique Delgado celebrated the special Mass at the university's St. Anthony Chapel. 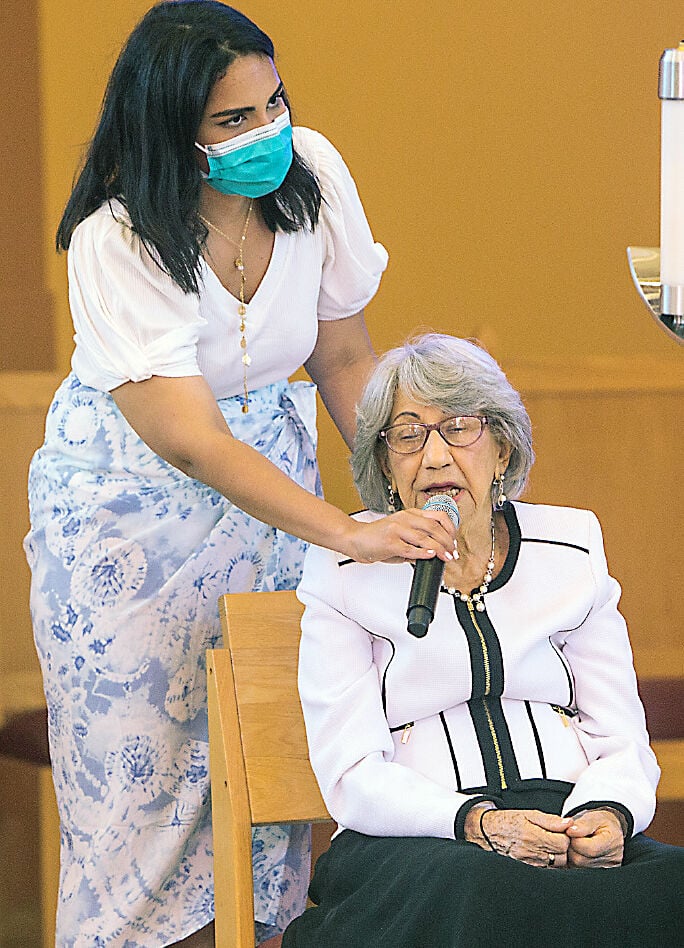 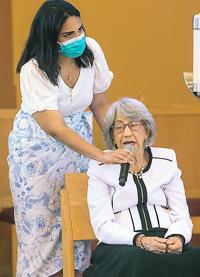 Natalie Marmalejos holds the microphone for her grandmother, Sofia Ruiz, 92, as she recites the rosary prior to the Mass for the World Day for Grandparents and the Elderly at St. Thomas University, July 25, 2021. Miami Auxiliary Bishop Enrique Delgado celebrated the special Mass at the university's St. Anthony Chapel. (MARLENE QUARONI | FC)

MIAMI GARDENS  |  Numerous members of the Marmolejos and Ruiz families came to St. Thomas University’s St. Anthony Chapel July 25, 2021, to recite the rosary with their two matriarchs and to attend a Mass celebrating the first World Day for Grandparents and the Elderly.

Reina was hospitalized on a ventilator for several weeks, unable to breathe on her own as she battled COVID and pneumonia. Sofia Ruiz, 92, was slipping away under hospice care after losing her ability to walk, talk, swallow, and eat because of advanced diabetes.

“The doctors didn’t give us much hope,” Silvana Marmolejos said.

However, the devoutly religious ladies made sudden and stunning recoveries which they attribute to their lifelong, unshakable faith. Both women are originally from the Dominican Republic and had large families: 12 children each. Their families are connected through the marriages of some of their children. One of Sofia’s daughters, Lourdes, married one of Reina’s sons, Jose. One of Sofia’s sons, Juan, married one of Reina’s daughters, Socorro.

“If the entire family came to the rosary and Mass, we would have filled the chapel,” said Silvana.

Sofia lived in the countryside and her family’s elders helped to raise the 12 children. As the older children grew up, they helped with the younger kids. One of the 12, a girl, was adopted. Sofia gave all her children biblical names because she always said she wanted her children to live lives similar to the 12 apostles. Reina lived in the city of La Vega, Dominican Republic. Both families eventually migrated to the United States.

Sofia and Reina sat on either side of the altar and led the rosary recital while their granddaughters and daughters held a microphone for them.

“Sofia has slight dementia, however, she always remembers how to say the rosary,” said Silvana.

This year, Pope Francis designated the fourth Sunday of July as World Day for Grandparents and the Elderly, to honor the older generations and build bridges with younger generations. The date is near the feast day, July 26, of St. Joachim and St. Ann, the maternal grandparents of Jesus.

Family members at the event ranged from Reina, 95, to her great-grandson, Donovan Marmolejos, 6 months old, who attended with his father, Andreas Marmolejos, and mother, Donna Marmolejos.

The idea of a rosary and Mass at St. Thomas University came from Silvana, an STU alumni and employee. She shared her idea with the school’s president, David Armstrong, and Father Rafael Capo, vice-president for Mission and Ministry.

Father Capo had already planned a special Mass for the World Day for Grandparents and the Elderly, but told her preceding it with a rosary hour with Sofia and Reina sounded perfect.

Auxiliary Bishop Enrique Delgado, who celebrated the Mass, said that we need to respect the elderly who have life experience and wisdom. Grandparents often teach their grandchildren, he said. Bishop Delgado, also one of 12 children, recalled his “abuela” waking him up early on Sunday mornings to go to church when he was a little boy.

“It was early and I was hungry,” he said. “But my grandmother led me to church and Jesus. Now, I celebrate Mass. She was a saint.”

“How many eucharistic ministers of advanced age do we have in our parishes?” he said. “How many lectors and ushers help us at Sunday Mass, always with a big smile. Their energy is amazing.”

“If you visit a nursing home you can see that many of the elderly are abandoned and neglected,” Bishop Delgado said.

Father Capo said that some STU students came to the Mass with their grandparents.