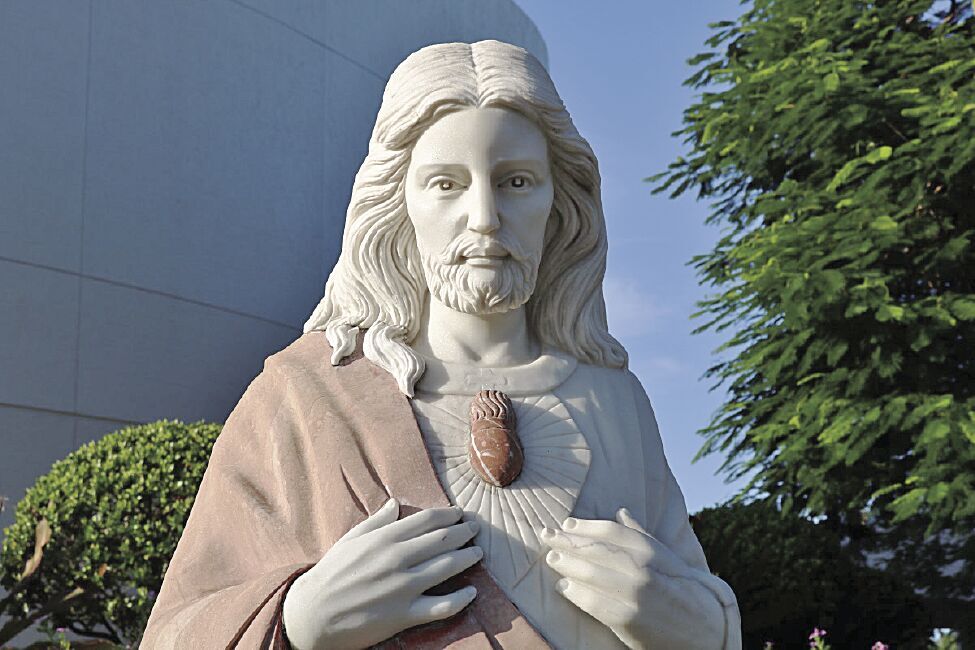 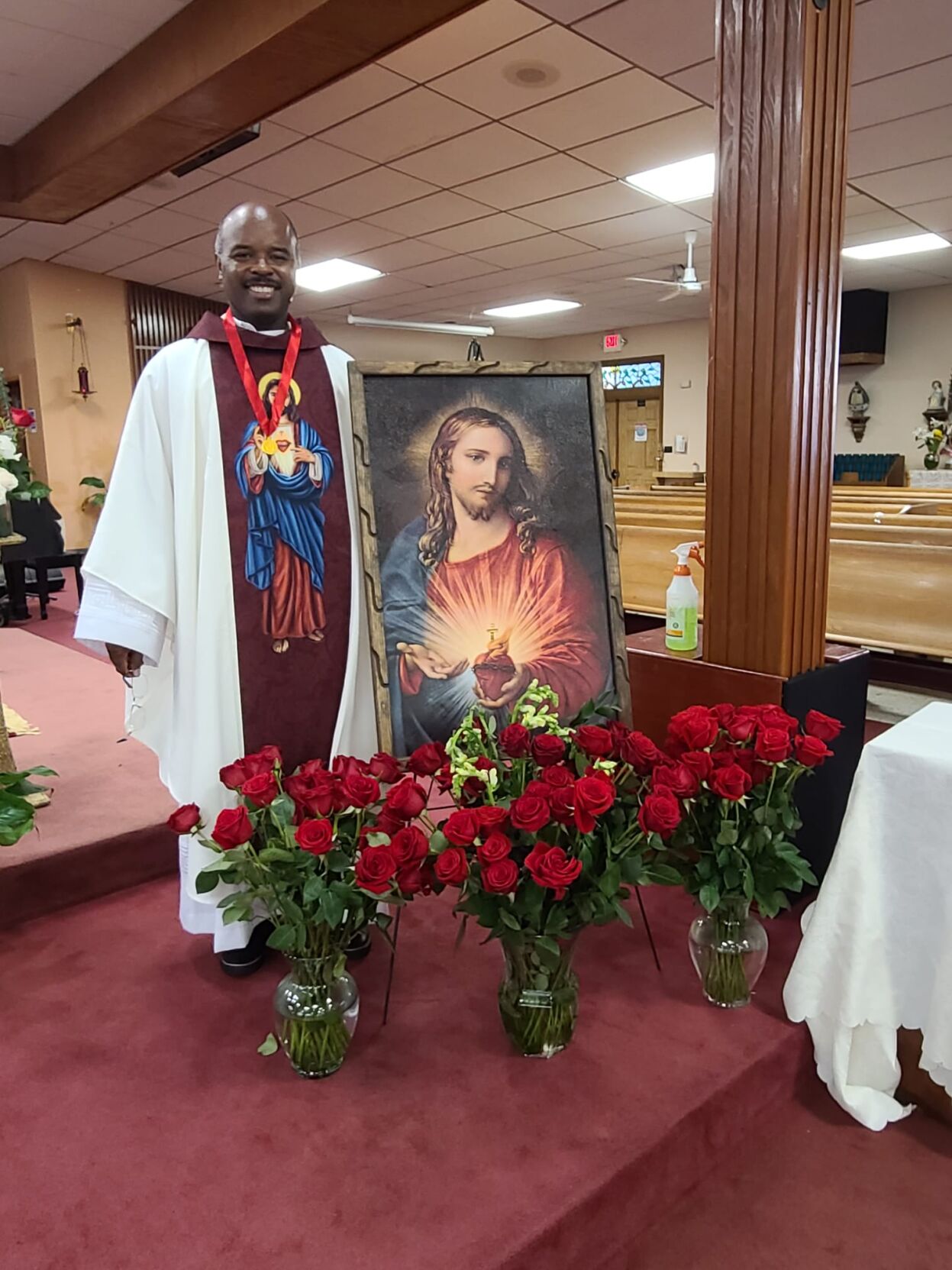 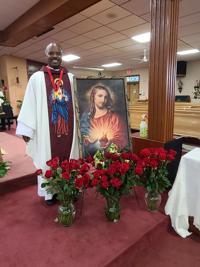 Father Patrick Charles, pastor of St. Stephen Parish in Miramar, displays an image of the Sacred Heart at his parish, which now has a small army of Guards of Honor. He is spiritual director for the parish association. 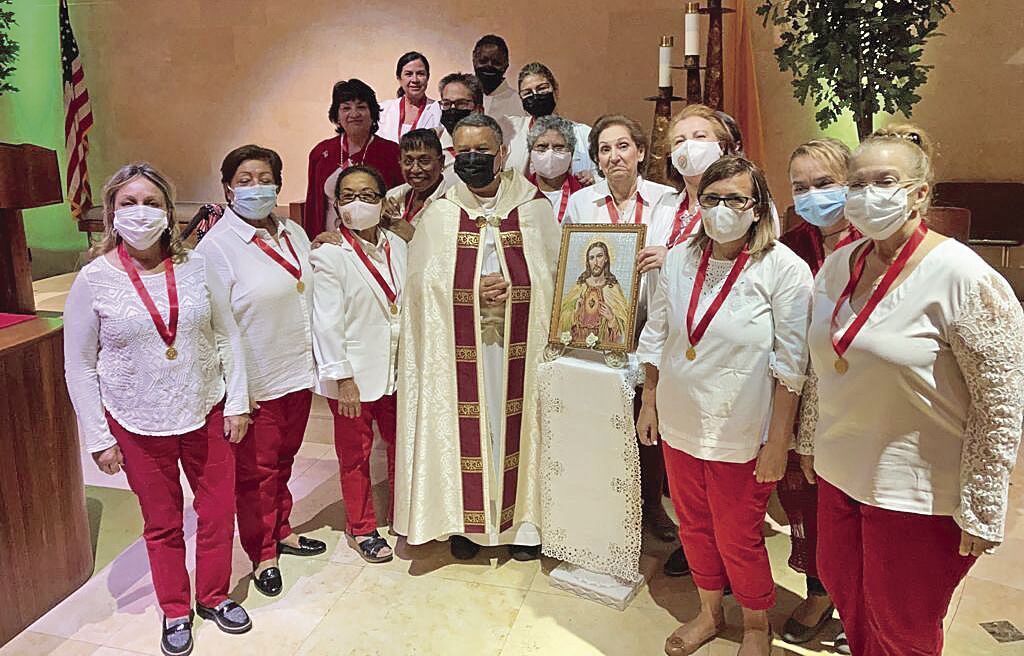 Father Gustavo Barros, parochial vicar at St. Louis Parish in Pinecrest, gathers with new members of the Guard of Honor at the church. Father Barros is the new spiritual director for the Guard of Honor Center, the first in Florida. 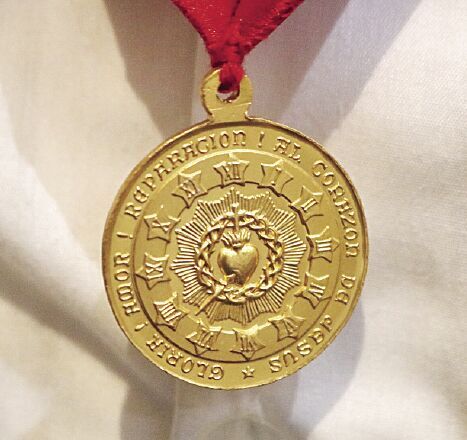 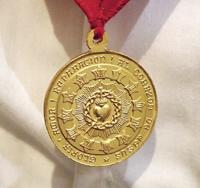 Father Patrick Charles, pastor of St. Stephen Parish in Miramar, displays an image of the Sacred Heart at his parish, which now has a small army of Guards of Honor. He is spiritual director for the parish association.

Father Gustavo Barros, parochial vicar at St. Louis Parish in Pinecrest, gathers with new members of the Guard of Honor at the church. Father Barros is the new spiritual director for the Guard of Honor Center, the first in Florida.

POMPANO BEACH  |  Every day at 3 p.m., Gilda Kawano’s alarm clock sounds, reminding her that it’s time to clear her head, shut out the busy world swirling around her and spend time in personal reflection and thanksgiving to Jesus.

“It is a beautiful devotion,” said Kawano, a parishioner and staff member at San Isidro Church in Pompano Beach. “You give Jesus at least one hour of your day. You know in your heart you are doing what God wants you to do. You are loving Jesus in return for his love. You are there for him.”

In June, the month of the Sacred Heart, Kawano joined 71 of her fellow parishioners at the altar of San Isidro Church. They pledged to give the Lord one hour every day for the rest of their lives. The vow, not taken lightly, took place during a special Mass of consecration where the faithful officially joined and took on the duties of the Guard of Honor of the Sacred Heart of Jesus.

In all, more than 120 people were initiated into the Guard June 11, 2021, the feast of the Sacred Heart, during different ceremonies at South Florida churches. The initiations were the first of their kind in Florida.

San Isidro, St. Louis in Pinecrest, St. Stephen in Miramar and St. Raymond in Miami now have small brigades of guards associated with the age-old Guard of Honor, a worldwide organization of Sacred Heart devotees dedicated to a deeper faith experience with the Lord.

The next initiation of guards is set for Oct. 16, feast day of Margaret Mary Alacoque, the saint notable for promoting devotion to the Sacred Heart in the 1600s.

“We are the first in Broward County to have the Guard of Honor,” said Kawano, who spearheaded the creation of the new association at San Isidro with approval from her pastor, Father Wilfredo Contreras.

A Sacred Heart devotee who believes the apostolate will be a strong building block for his parish, Father Contreras began promoting the devotion at San Isidro two years ago. The parish even displays a life-size statue of Jesus and his Sacred Heart in a place of honor outside the church.

The priest explained that Jesus promised “great graces” to those who faithfully practice the Sacred Heart devotion and its complement, the Guard of Honor.

“It was only natural that when I was approached to consider having the Guardians of Honor in our parish that I would say yes,” he said. “Our mission statement says that we are striving for holiness to be light of the world, and what better way to achieve holiness than to become a member of the guardians.”

The Guard of Honor of the Sacred Heart of Jesus formed as an association in 1863, through the hard work of Visitation Sister Anne Marie Bernaud. The apostolate initially stayed inside the walls of the Monastery of the Visitation of Holy Mary in Bourg, France, but quickly spread.

Membership is free. Members’ names are registered in an official book at the Monastery of the Visitation. The book contains the names of living and deceased lay people, religious, priests and popes who have been part of the Guard of Honor, including St. John Paul II and Pope Blessed Pius IX.

Members are asked to choose a special hour of service or “hour of presence” as part of their duties. Whether one chooses a time during the day or during the night, each hour has a unique patron and a special intention.

Guards serve their hour come rain or shine, offering simple acts of love to the Lord while going about their daily routines, creating a perpetual tribute to the Lord without asking anything in exchange.

The National Guard of Honor is located in Tyringham, Massachusetts, under the direction of Father Sean O’Mannion, a frequent guest on Catholic television and radio and a guard himself.

“This is a way we can daily return the love back to Jesus for living and dying for man,” said Father O’Mannion during an Eternal Word Television Network broadcast. “Throughout the entire world in every time zone, someone is with the Lord. Every hour is covered.”

The Guard of Honor of the Sacred Heart arrived in Florida in September 2020 with the opening of an official center, the first in the state. It provides guidelines and information about the Guard and offers support for parishes that want to bring the apostolate to their communities.

Father Gustavo Barros, parochial vicar at St. Louis, is spiritual director for the center, which is headquartered at his parish. St. Louis parishioner Isolda Iznaga is serving as “zelatrix” or center administrator, spokesman and liaison. Their duties are spelled out in the association’s official manual.

Archbishop Thomas G. Wenski approved the center Sept. 3, 2020. In a letter to Father Paul Vuturo, pastor of St. Louis, the archbishop said, “It is my prayer that this devotion to the Sacred Heart in which devotees spend an hour in the presence of the Sacred Heart will be for them a true way of holiness.”

Since the center opened, Iznaga has continued to network with parishioners and parishes to get more faithful onboard. “The Guard of Honor is not a ministry,” said Iznaga. “It is a way of life. It changes you. You serve as a guardian for him. It makes you be a better Christian.”

This summer, the new guardians received medals with red ribbons. One side of the medal features an image of the Sacred Heart. The other side holds an illustration of the first Guards of Honor: the Blessed Mother, St. John and St. Mary Magdalene, who stood guard at the foot of the cross when Jesus was crucified, never abandoning him when his other followers left.

“The Guard of Honor is a complement to the Sacred Heart of Jesus devotion,” said Iznaga. “It has changed my life completely. I have seen miracles happen. It is a beautiful devotion.”

ABOUT THE SACRED HEART DEVOTION

Catholic Churches everywhere have statues and images of the Sacred Heart of Jesus representing the Lord’s divine and human heart, but some do not know what the devotion is all about.

Visitation Sister Margaret Mary Alacoque of France first promoted devotion to the Sacred Heart in the 1600s. It quickly spread and today is practiced worldwide.

Those who faithfully embrace the devotion spend time growing in their personal faith life. They visit the Lord in the Blessed Sacrament and attend first Friday devotions. They also frequently take part in the sacrament of reconciliation to help them remain in God’s graces, and receive the Eucharist as often as possible.

The Guard of Honor of the Sacred Heart takes the devotion a step further, helping people have a greater love relationship with Jesus.

Father Barros can be reached at St. Louis Parish at 305-238-7562 or by email frgustavo@stlcatholic.org.

To visit the National Guard of Honor website go to www.guardofhonor-usa.org.