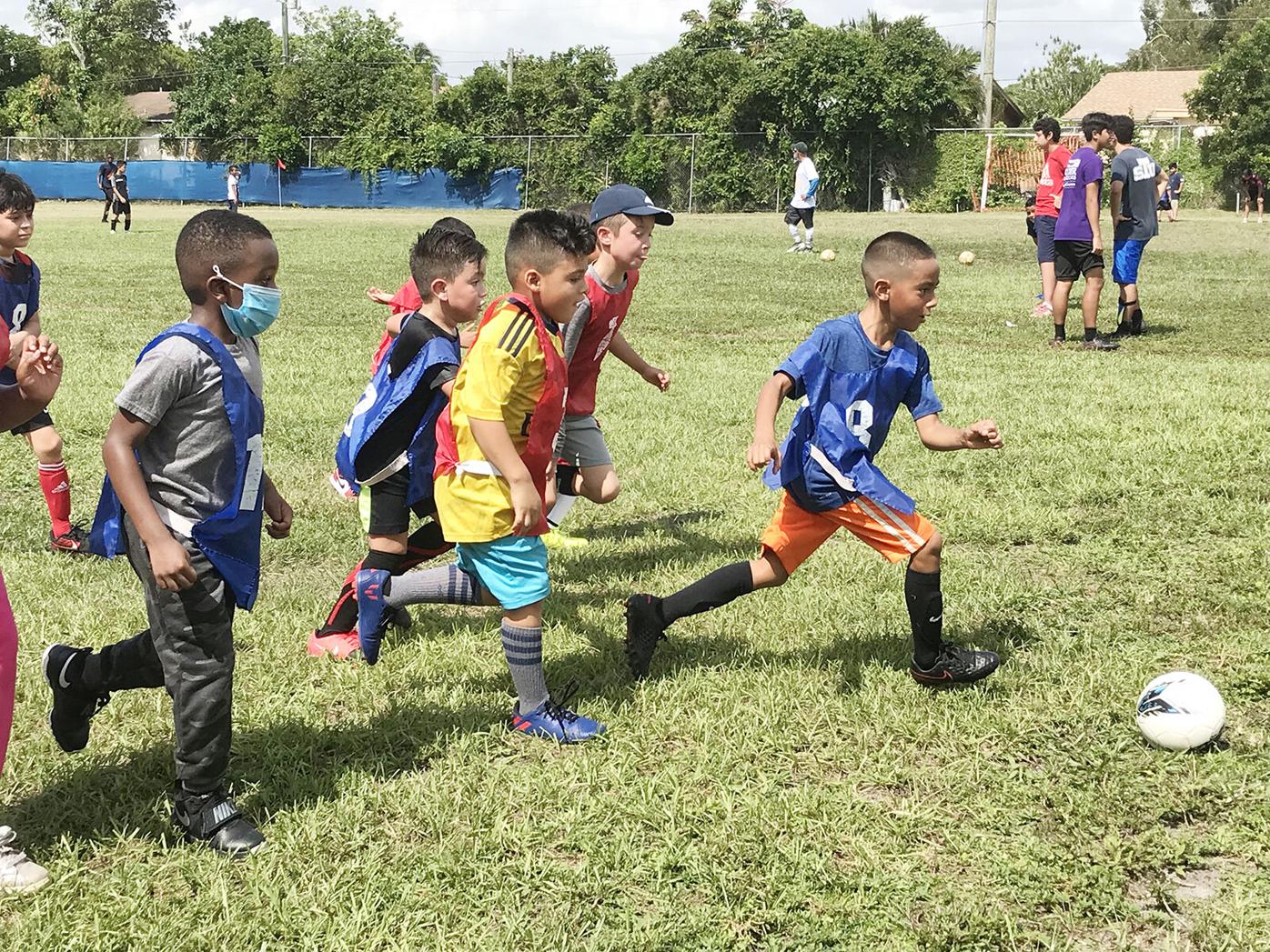 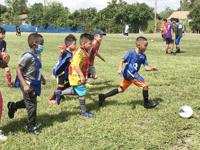 Youngsters chase a soccer ball at one of the free Saturday training sessions sponsored by the Knights of Columbus at St. Stephen Parish in Hollywood. (PHOTOS BY ROCÍO GRANADOS | LVC) 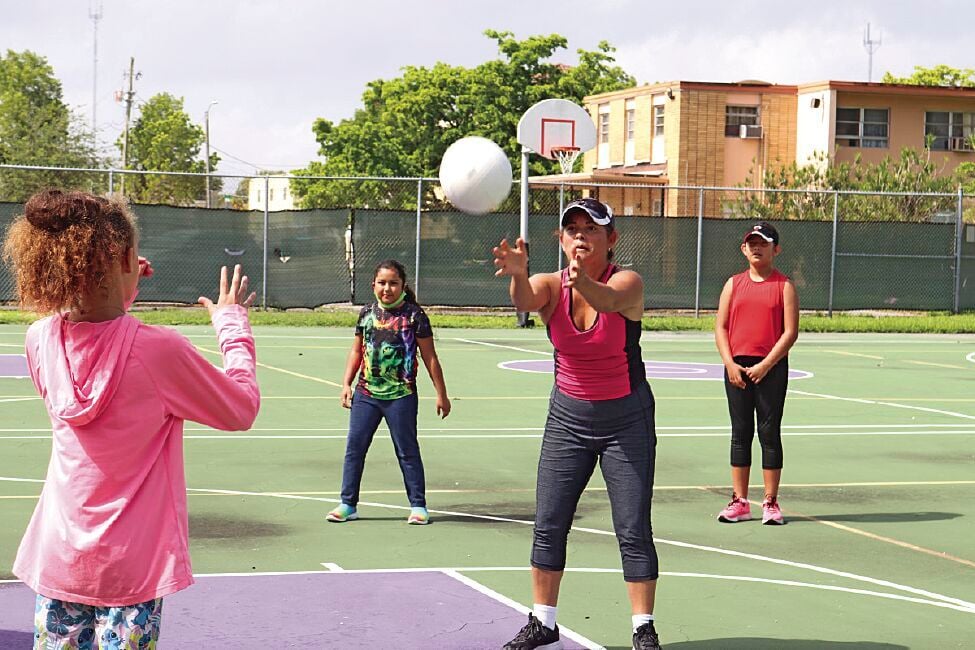 Guadalupe Díaz, center, volunteers to train boys and girls and interested adults on the basics of playing volleyball as part of the Knights of Columbus’ free sports sessions at St. Stephen Church, Hollywood. 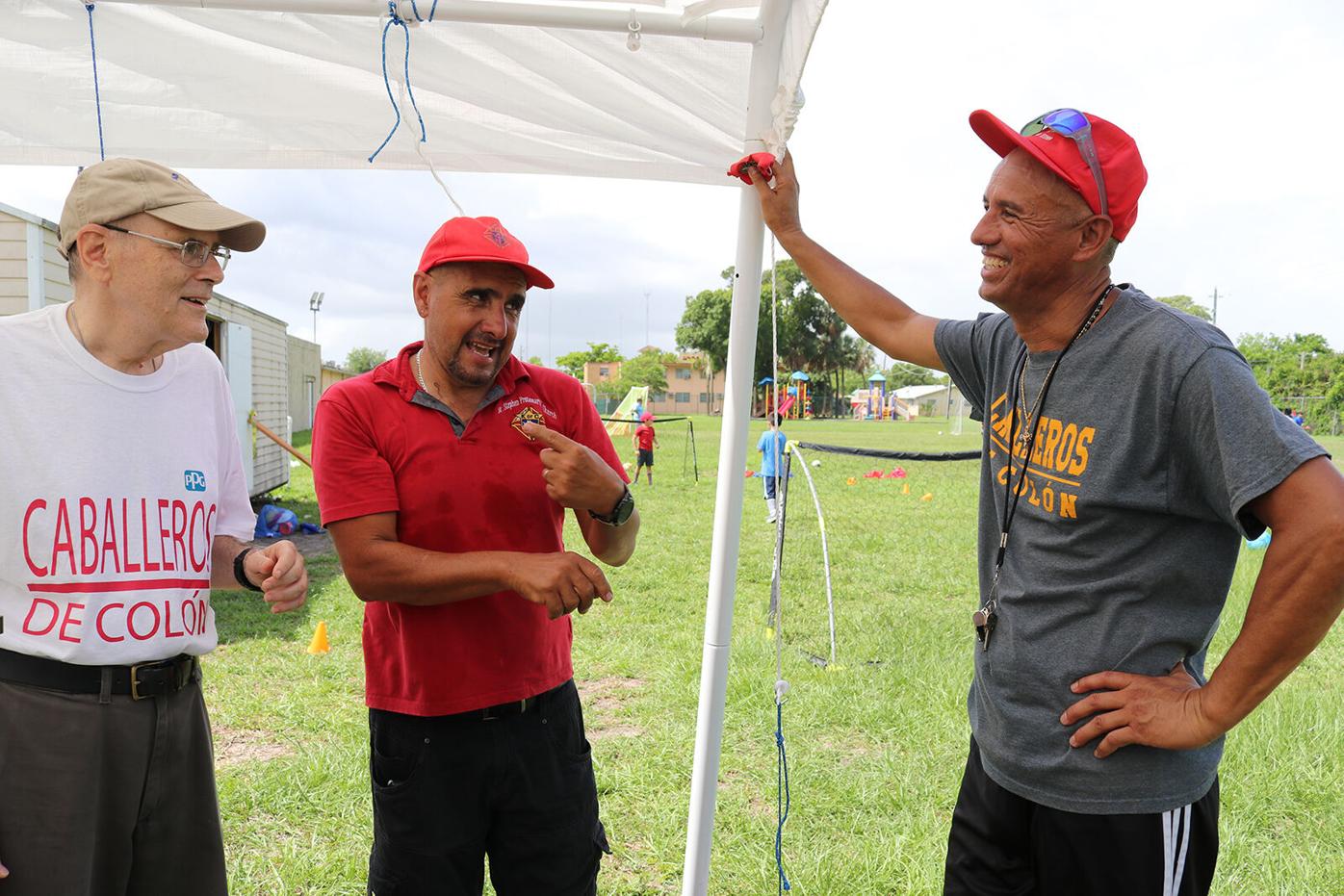 John Venezia, left, Grand Knight of the Holy Spirit Council of the Knights of Columbus based at St. Bartholomew Church in Miramar, speaks during a Saturday morning practice with Walter Silva and Ramón Palma, Grand Knight and member, respectively, of the San Eugenio de Mazenod Council of the Knights of Columbus, a newly formed Hispanic council based at St. Stephen. (PHOTO BY ROCÍO GRANADOS | LVC)

Youngsters chase a soccer ball at one of the free Saturday training sessions sponsored by the Knights of Columbus at St. Stephen Parish in Hollywood. (PHOTOS BY ROCÍO GRANADOS | LVC)

Guadalupe Díaz, center, volunteers to train boys and girls and interested adults on the basics of playing volleyball as part of the Knights of Columbus’ free sports sessions at St. Stephen Church, Hollywood.

John Venezia, left, Grand Knight of the Holy Spirit Council of the Knights of Columbus based at St. Bartholomew Church in Miramar, speaks during a Saturday morning practice with Walter Silva and Ramón Palma, Grand Knight and member, respectively, of the San Eugenio de Mazenod Council of the Knights of Columbus, a newly formed Hispanic council based at St. Stephen. (PHOTO BY ROCÍO GRANADOS | LVC)

MIRAMAR  |  Thanks to the Knights of Columbus of St. Stephen Parish, children and youths from the community are receiving free soccer and volleyball lessons on church grounds.

Many parents from the neighborhoods surrounding St. Stephen cannot afford to pay for sport academies for their children, who might stay home all day playing online video games otherwise. To get kids to play a sport and get off the electronics, the newly formed Hispanic group of the Knights of Columbus, St. Eugene de Mazenod Council of St. Stephen Church, came up with the idea of providing free soccer and volleyball lessons on Saturday mornings.

“God tells us that what we receive for free, we give out for free,” said Antonio Aracena, the council’s Deputy Grand Knight. “Many parents didn’t know what to do with their children at home, and we came up with the idea of having soccer games and asking parents to participate directly or indirectly with their children.”

The lessons began in October 2019. “When the pandemic hit, everything came to a standstill,” said Ramón Palma, one of the first members of the Knights’ council. But the lessons resumed in September 2020, and more kids have been attending ever since.

“One of the works of the Knights of Columbus is to help the community,” added Palma. St. Stephen includes people of many nationalities, and “we came up with soccer because it’s universal, everyone plays, and now we’re hoping to get more people for volleyball.”

Although the parish did not have a proper soccer field, there was plenty of space on the church grounds, and the Knights conditioned an area to serve as a regular-sized field.

St. Stephen is a low-income parish, but donations from neighboring businesses helped the Knights acquire the necessary funds to purchase equipment such as flags, balls and paint for the field, and pay maintenance fees and lighting. They made the goal posts themselves out of PVC tubing. Water for the breaks is provided via donations from a nearby supermarket.

“But we still have a long way to go,” said Walter Silva, Grand Knight of St. Stephen’s council. There are some problems with the turf on the field; grass and sprinklers, or artificial turf, are needed. Also needed are lights for the west side and more accessories.

Between 40 to 70 children ages five and up attend the soccer lessons on Saturdays. “It’s open to everyone,” said Silva.

On Tuesday and Thursday evenings the parents play, “so they are also involved,” said Palma, a St. Stephen parishioner for more than 30 years.

“I love playing soccer the most,” said 16-year-old Marco Loa Cruz during a break from training.

Loa Cruz noted that he had prior knowledge of soccer, but because of the lessons he has been receiving for a month now, he has learned to play with his teammates on the field and to be respectful.

“I like the sport and I like to compete,” added the young man, who found out about the lessons through some friends.

According to Silva, seven professional soccer coaches give lessons on a voluntary basis. One of them is Rolando Prestan. He heard about the program while visiting the once-a-month flea market held across the street from St. Stephen Church and decided to help out. He began coaching the youngsters about three months ago.

“I love soccer. It’s family-oriented, it’s a sport that never stops and it teaches us a lot of peace and discipline,” said Prestan, who worked for the Miramar Lions soccer club several years ago.

Many of those he taught are now playing professionally in Europe, said Prestan, who is planning to renew his professional soccer coaching license.

“Thanks to the church we have the playing field, which is the most important thing. It’s not very big, not very small, but it is something and we are on sacred ground,” said the coach.

He added that he was proud of the young people he teaches because many were inactive for a long time during the COVID-19 pandemic. Now “I try to teach them as much as I can in just one day a week, and they are doing well.”

Guadalupe Díaz learned about the free volleyball lessons during a Mass at St. Stephen.

“I was coming to be trained,” Díaz said, but when she saw that the girls were ducking the ball because they didn’t know how to hit back, she volunteered to teach them “the little I know.”

“I’m trying to introduce the girls to volleyball. I like it a lot, but I’m not a professional,” said Díaz, a parishioner since she arrived from her native Mexico 20 years ago. She said she is happy to help and although the girls’ attendance is not constant, she goes on Tuesdays and Thursdays in case someone wants to play, and encourages them to go on Saturdays.

Many children do not attend regularly. To motivate them, the Knights are creating teams to compete with nearby clubs.

“The first goal was to bring soccer to the kids, and now we want to give them a bigger incentive to come,” Silva said. Via donations, raffles and prizes that the Knights have won, they bought uniforms for the training sessions. These include two t-shirts (one red and one blue), a pair of shorts and socks for each child, “so that the children take on more responsibility and the parents feel motivated,” Silva said.

The Knights are focusing on the younger ones to create a team of the same age group, and if they succeed, it would be the first parish team in the Archdiocese of Miami. “That’s our goal,” Silva said.

Mercedes, a mother of three, ages 4, 5 and 8, said she found out about the lessons through Facebook. She brings her children because “they get away from the computer, the internet and YouTube, and here it feels like a family.” n